NOT SAFE FOR BRAIN

The article you are looking at may not be brain safe!
If your mind or personality notice this article, claim that it was spam and blame a virus. Otherwise, continue to read it until you spork out your own frontal lobes.

~ Semen on your face

“I suppose you expect me to make some sort of unsubtle pun on 'come your brains out.'”

“I roved this fleakin' game!” 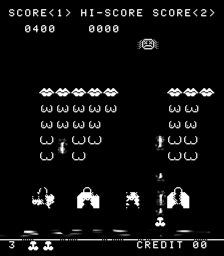 The game's design gave the players the impression that he was in a desperate battle to save his little world from invading females who would at any moment realise the nature of their oppression and turn radical feminist, with endless waves of electronic emancipated women sweeping down until the player and his virulent demon seed were overwhelmed. The simple background soundtrack to the game, with the sound of a heartbeat in the womb going faster and faster, increased the tension and kept players coming back for more. It also helped every female who saw the game realise that nothing that Andrea Dworkin had ever said was exaggerated in the slightest and that lesbianism was a much safer idea than any activity that might involve speaking to people with male reproductive organs, leading to universities of the 1980s and early 1990s being filled with women who had excellent and sensible reasons to be man-hating dykes. 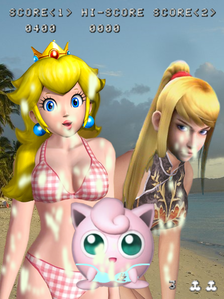 The 2006 version of the game, featuring several of your Nintendo favourites, but preserving the feel of the original. You can't possibly pass up the opportunity to spaff Jigglypuff in the face.

A revamped version of the game, with One-Eyed Point of View, was released by Nintendo in 2006. Many popular Nintendo characters were added, though they passed on anything to do with mushroom kingdoms, for some reason.

The game can be played as either Felix, a vampire aristocrat, who shoots with care and whose aim is always true, or Oscar, a down-to-earth zombie, who makes up in volume what he lacks in precision.

As Friedrich Nietzsche argues in The Birth Of Tardegy, the video game of modern Japan is the highest form of art as it combines Apollonian and Dionysian elements into one seamless (w)hole, inducing the player to experience the full spectrum of the human condition.

The 2006 game is structured as a religious and philosophical allegory, in which the undead decaying corpse symbolises the unthinking evangelical zeal of the door-to-door faiths. The zombie sodomite penis in particular, with its searching eye and faint cries of "ass ... aaaassssss ...", demonstrates the value of firm persistence and working toward a goal in an uncertain world: that the Dionysian "shotgun" approach is entirely effective with consistent application.

The vampire symbolises a more Apollonian "rifle" approach to spiritual matters: a more detailed, structured, personal journey to discovering one's place in the world, achieving redemption one beautiful young woman in an underwired nightgown at a time despite all those annoying slobs, munching on flesh and just draping their victims' limbs and guts and organs all over the place. Ew.

The producers hope the game will make considerable gains in furthering philosophical understanding and religious diversity and tolerance in our culture.

The movie opens with a view of Oscar's crypt, littered with bones, gore, glowing puddles of semen and empty piss bottles. His equally undead wife has left him a few months before, taking the dead baby with her. Felix has just been thrown out of his eastern European castle by his three vampire brides, ungrateful wretches that they are. Oscar invites his friend to stay at his place.

Unfortunately, their different styles of attack upon the still-living conflict. "You leave me little notes on my pillow. I told you a hundred-and-sixty-eight times I can't ... stand ... little notes on my pillow! 'We are all out of Radiation-Proof Kleenex. - F.U.' It took me three hours to figure out that 'F.U.' was Felix von Dracul von Nosferatu von Uberwald!"

In the climactic scene, Oscar gathers all the suspects into the room, zips up his pants and tells them the results of his forensic examination of the corpse, upon which the surprise suspect — hypnotised by the dental horrors revealed — confesses. Felix dives for the suspect's throat as Oscar simultaneously undoes his pants again, leading to the hilarious punchline phrase from the trailer about a cumstain on Felix's opera cloak. The movie ends with justice done, Felix reunited with his vampire brides and Oscar back to living alone in his crypt chewing on dead women's sexual organs and masturbating hourly with their cored rectums.