“You should see me when I go to America. It's like monsoon season on my face! But I'm so jealous because I am not an American! I live in a shitty country that can't bend over with out a long stick sliding out of their asses.” 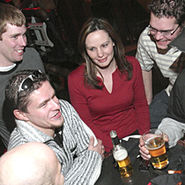 The Woman spots a group Americans and lingers to wipe up the survivors.

Xenophilia : That weird attraction-y thing that females have towards males of other countries other than your own hence making it near impossible to find a half-decent girl these days even with half your brain still remaining in your Non American head.

This works in favour for the Brits and Europeans because they are commonly very polite gentlemen and could go to any country in the world and be simultaneously surrounded by women and could choose any of them and be kicked in what they call testicles (and which Americans know for sure are actually plastic implanted balls the size of grapes and the texture of a Yankee kick to your groin) and have their wallet stolen by $5 dollar whores before they realize, HEY!! No one really cares about us white peoples from a ass backwards country.

Note the Women waiting patiently behind them so they can get some fake cash...

Xenophilia started in the early 1940s when America finally decided that the Nazies were having to much fun kicking British, French and other peoples' ass and decided they were (legitimately true) so Yankee to take the world on, but the British being shallow idiots thought the Americans were actually coming to help when in reality 69th Regiment had gotten led astray from japan by the lure of $10 hookers in Peru which everyone was too drunk to remember where it was located. So over they came to these lowly excuses for isles of sanctuary, overdrinking, widows and free contraceptives from the NHS. However, the Americans, being the supermen they were, decided that a dead man's wife wasn't a very good way of going about getting some "Courage" and instead they headed down to our local Pubs and drank a too many pints of good ol' British ale for the Rest of the Allied Forces to keep up causing the Americans to have to lead the Allies through each victory, while holding everyone elses hand.

Drunk. The United Forces troops were shipped over to France for the D-Day landings. Thinking they were invincible, the Americans thought they even had enough time between landing and getting to the seawall for a stop at the local bar that some of them stopped, bent over and picked up their dismembered arms and then sauntered over to the cliff face and started climbing. Amazingly most of the Americans were so drunk when they landed (They had gin on the boats) that when they 'walked' up to the mounted guns, nearly all the bullets missed and the Germans were so afraid of this (because they had somehow made a timeloop and seen The Matrix the night before) that they immediately hid in a corner of the bunker and shat themselves, as the very sober Irish came in and took control and were consequently killed by land mines. Figures, Only Americans (i won't say USA being as modest as i am) can even think of doing this without getting in the 'mojo'.

The Yanks being the amazingly modest people they were, knew that they single-handedly won the beaches of Normandy. A 24-Hour Party held by the Brits and Irish soon followed suit and they were all shloppily shammered by the next day. At the same time all the French women who survived the Nazi invasion noted that all the guns had stopped firing and it was safe to go out again. In the little town of Lillebec all the local prostitutes headed over to the camps that the Germans used to be in and see who they could make some money off be it Hitler's Biertrinkern or the not-so-noble Allied Forces. Fortunately, for the American's wavering labidos and the prostitute's Stella money, the Allies had won and all the American were off their tits. So, in true French style, the prostitutes started to fuck the brains out of every American regiment in the front-line.

The prostitutes each made $5 per American which being as rich as we are realized this was a good deal and took advantage. They conjunctively used this money to relocate their little village to Central Northern France and create a tiny economic core. They also changed their town name to Lille. However, whilst carrying their homes across the plains of France, the clever little whores decided that they would contact their friends in Paris to give them pre-notice that there would be "Very-drunk, very-stupid men and the United Kingdom's forces" arriving their soon. This didn't only cause a huge increase in France's economic wealth and Birth Rate but also allowed every girl who wanted a good ravaging to get ravaged. After the "Americans won the war", the French women were very exhausted and as the French men returned from the camps scattered around Europe, the women refused to let the men anywhere near, this disallowed a baby boom in France. America did something right (sigh) again. But they weren't on top, but for once they stood by and let the British take credit for something just (instead of killing technological inferior aboriginals) even if they hadn't been the ones who did it.

The First Case Of Full Xenophilia[edit]

Jean-Claude with ready to give up.

The first case of this ever happening was a young woman in Paris. Her name was "Esmerelda Unimaginatif" and she lived on the 3rd floor of the hotel just south-south-west of Notre Dame Cathedral where she used to be a Nun before converting to Hedonism and agreeing to marry "Jean-Claude Francois" due to the size of his Vineyard. The night before the wedding war broke out in France and all the men were immediately asked to bring all their white flags and meet in the town squares.

3 years and many Lesbian interactions later, the Americans arrived in Paris with the longest Guns the French women had ever seen. Not even remembering Jean-Claude, Esmerelda ran to the streets. She pulled off her name label which had Ezzy written on it and replaced it with an American friendly "ALLO mon nom est:" label which also had the American friendly name of Pippi Longstockings on it. For the next year and a half, "Pippi" rode as many horses as she could using the money that she had earned off the Americans during the long, Parisienne nights.

When Jean-Claude returned from the camp near the brand new settlement of Lille, Ezzy refused to touch or even go near him. It wasn't just due to his boarish looks and onion-y breath and beastly breadth but because he was French. Jean-Cluade killed himself on the spot. This was the first case of Xenophilia Suicide which is now showing on BBC One/HBO 9/3 PT.

The guy in the middle? He's black Greek.

At the present moment only two countries are affected by the light drinking habits of the Pre-1970 Americans. These being the United Kingdom and America and also Canada (for a tiny part). Our American hosts making tits of themselves all over the continent of greatness have unfortunately severed all links with every other country other than Britain itself just because they feel sorry that britain has no other friends. This means that we Brits have to suffer the fact that an American could come over any Pub Quiz night and have a chance of scoring by the time the night is through. On the other hand, because we are so hospitable of the lager-drinkers the women of America are over-joyed when we go over because we got rid of the High School scum who made the Football first team and in turn... y'know... we have a long chat and start up one night stands which neither of us care to remember each others names. However a major downside of this new increase of "Sex-immigrants" into the United States caused a huge decline in numbers of marriages by United States couples followed then by a decrease in same nationality couples and now a simple American only has a 100 in 20 against chance of even touching a female on a night out in their native home country. Luckily for the Americans they can move to England and their chances will be increased to an amazing 3:2 for. This is not because Americans are particularly attractive but because there aren't any Native Americans (pureblooded like me) anymore, although the 16 year-old Brits have been getting odds of 7 to 0 for when they try to get with 4 year olds.

The Canadians have good intentions but they don't do much to help in foreign countries when we Brits are around so they can't score anywhere unless they use the fact that they are in the Commonwealth to their advantage. Which they do, which is good because we all like Canada and plan to all emigrate there some day.

Yes. Wait! Sorry! I meant not unnecessarily! All Americans will eventually find true love in Ohio. Brits are scared shitless of Cleveland (because of the sheer americaness)and normally those women who are Xenophobic end up there. Actually to be honest I don't think anyone would go further than New York State these days because the black people are so violent so, I think American Civilization will be saved by the fact that the British are too stupid to let Mother Nature allow them to live and won't steal all the women away.