Okay so yaoi is like the best most kawaii desu desu thing that god ever made for mankind!!! Its like god took everything good and put it into one sexy kawaii package that can solve all of our problems!!! YEAH really!! I'm seriously FUCKIN' serious here if you disagree you are a fuckin' homophobe just like fuckin KKK!! >:0

the history of yaoi

we have to make all da guys gay again or else!!!

yaoi originated with the Yaoi God, Yaoiweh, who we all worship. When he made dudes, they were all supposed to be gay, but for SOME REASON they were all gross and straight!! I mean what the HELL?? Straight couples are sooo gross, what guy in his right mind would ever be straight??? It's sooo gross!! Why can't guys be gay??? WHY WHY WHY???? Anyway he made guys just to be gay yes but then the stupid IDIOT guys though it would be a good idea to have sex with girls instead of guys!!! Again, WHAT THE HELL??? >:O Now the yaoi god is sad and we have to make him feel better by making all the guys in the world gay or else!!!!!!

Okay so den like stuff happened that I don't really care about and then it was like the 1980s and some amazing, smart, and brilliant Japanese women learned abut how sad the yaoi god was. So then they started publishing the FIRST EVER YAOI!!! i know, it's amazing, isn't it?? ISN'T IT??? Yeah, so hes starting to feel a little bit better but we need to take it a step further. in order to appease the God of Yaoi, me must make all the guys in the world homosexuals, so that the yaoi god will be happy and us loyal disciples will be happy too and everyone will live happily ever after. THE END~!!!!!! :3

You see, many many people think yaoi is just an art form, but it much more than that. it is a full-fledged religion. but best of all, its a religion where you can keep you're previous religion when you convert to Yaoiism. for example, I was a Christian before I converted to Yaoiism and became enlightened. I kept my beliefs, though. No not that "love thy neighbor" "clothe the naked" bullshit. I was convinced that Yaoiism was right because I saw a sign that said "JESUS HAD TWO DADDIES!! And i was like, "OMG like no way does that mean that god is gay??" so I looked up Yaoiism and IT IS RIGHT WHETHER YOU LIKE IT OR NOT DAMMIT AND IF YOU DON'T YOU WILL BE STRUCK DOWN LIKE ALL THE NONBELIEVERS!!!!!!!!1!!111!!!!!!!!! 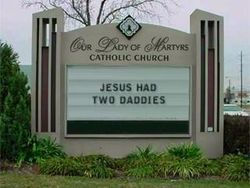 What can u do u ask? Well, I'll tell you. Firstly, if your a guy, you're strongly encouraged to do the following:

1. if you think your straight, your wrong. because the yaoi god made all men gay, but like i said they decided they liked women for SOME REASON and so it is your duty to return to your gay roots and be as gay as u possibly can. 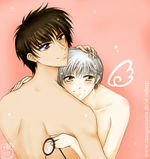 2 .dump your girlfriend if you have one, but first introduce her to yaoi so she doesn't get mad at you.

so what can the ladies do??

OK so if you are a lady Then you can GO DIE jk lol you know we need you all for the Crusade. >:3 The Great Yaoi Crusade to pure all straight people from the Holy Lands lol. And pretty much every where else, too. You ladies can do the following:

2. Dump your boyfriend if you have one, though considering the circumstances u probably don't. :)

3. Change your interests from guys to gay guys. XDDDDDD

our forces so far. we will claim this land in the name of the Yaoi God!!11!
all of that will lead up to THE GREAT YAOI CRUSADE, I think I mentioned it earlier but whatever. >.> So anyways the crusade is the final struggle against the evil straight people that have strayed from Yaoiweh's gay ethic!!!1! we will wtfpwn them in battle, but not yet. The time is not right. We are lacking in troops to lead the battle!! So we need YOOOUUUUU to help us, and your going to whether you want to or not desu, by going to these sites right down here:

Yaoi.com for your basic yaoi needs! MAH FAV GUIDE!!!!11 IF YOU DONT FOLLOW THIS GUIDELINE, FACK YO BAKA.