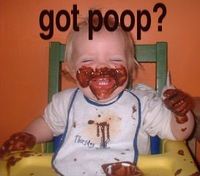 Coprophilia is the belief that shit will eventually come to life, and those who consume, play, and/or have sex with it will be rewarded in the next life. While Coprophiliacs claim it to be perfectly natural, even the First Amendment is disgusted by it.

Coprophiliacs worship all things shit. While Coprophiliacs lack official scripture, it is a general custom to build a shrine to Tubgirl out of shit (preferably in one's closet) reflecting how Tubgirl shit and sculpted the entire world. They pray at the holy shrine’s base everyday, wishing for shitty blessings. If they are blessed with shittiness, they are absolutely required to use it for good, not evil. Tubgirl is omnipresent and omniscient, somewhat indifferent and oblivious because she is fixated in the ecstasy she radiates to her worshipers. She is a ’multi-faced’ deity, one aspect sucks, licks, and eats turds, another rubs shit everywhere and on everything, and the last aspect of Tubgirl is constantly shitting and re-stuffing shit in her anus and vagina. Through Coprophiliacs acceptance that the purpose of life is to serve Tubgirl by following her rituals, to glorify her by expressing her divine power whenever possible, and to amuse her by appeasing her whims. Tubgirl provides answers, love, pride, protection, and powers. Many Coprophiliacs are frequently successful people because it is empowering to choose when, where, and even how you want to poop.

Instead of praying on Sundays or before a meal, Coprophiliacs pray every time they shit, always expressing thanks to Tubgirl for her gift of shit, and asking for plenty more.

Coprophiliacs do not believe in an afterlife. Rather, they believe in reincarnation. All Coprophiliacs believe that in order for a better next-life, you must not use shit in vain. If you use all shit for noble purposes, you will return as a shit-log in the next life. The type of shit one returns as depends on the shitty deeds of the recently deceased.

Returning as a brown log means that person lived a standard life of shit with no severe wrong-doing. Returning as a green log means that person did not live a good life of shit. This person probably flushed his shit down the toilet. Returning as urine is the worst possible reincarnation, as this person never used shit in productive ways. On the flipside, returning as shit from Tubgirl's colon is the best possible reincarnation. In one ritual of Tubgirl, the living idol can intake enemas of urine and poop the urine out with her shit, thus forgiving a person for a sin. Hopefully, the soul within the urine will grow from the experience and go on to live a good next life of shit. The idol's enema of urine is called the Nectar of Renewal.

Coprophilia can be considered a type of ancestor worship, in that it connects one with very primordial roots. Once upon a time in our past - shit was respected and used for everything, from farms to grow food to early houses as mortar. It is not waste! Coprophiliacs believe that the idea of ‘waste’ is an unwholesome concept, and it is simply just more fun to play with shit than it is to loose shit down a toilet.

Don’t hold back anymore, if your curious, just do it, let it go. The more you do the doody the more you’ll re-learn how to have fun with it, play in it, even eat it, and at last share it. Anyone can admit that it feels really good to pinch a loaf, why not share the pleasure and spread the love? Roll logs. How many readers can genially say “I have a friend that will let me poop on his or her face! Do you”? What intimacy! Trust in Tubgirl clearly goes beyond the trust of nearly all institutions and relationships. And it is within your own power to teach yourself how to enjoy a good shit, and cast off the repression instilled in you since you were born. Initiation of new members generally requires several steps including: pooping their pants in a crowded area, (preferably in tight white pants with no underwear), then ‘hot-paning’ slapping or letting others slap their poop filled ass and pants. One must also attend a certain number of Second Harvest Dances, and fulfill a quota of other fun uses of shit, like “rub fresh shit on my face three times a day for four weeks, use shit to masturbate with four times a week”, etc.

Coprophilia represents complete liberation from social inhibitions. Coprophilia symbolizes wholesomeness with oneself and sharing of that unrestricted fulfillment with other worshipers. Like giving birth, the act of defecating is a wonderful miracle, and it occurs every day or two! And like a newborn baby, shit is an amazing gift from Tubgirl. The theme of most Coprophiliac ceremonies symbolizes the playful expression of the body's creativity, joyful abandonment in the sacrament of excrement, and renewal through reunion with primordial innocence.

Special thanks to the celebrants of The Brown Ambrosia Lodge, for this glimpse into ancient traditions of the Coprophiliacs. The Brown Ambrosia Lodge is a proud Coprophiliac church, that assists celebrants in personal freedom and liberty, strength of identity, duration of happiness, and of course have provided some of the most in depth explanations on this website. One day they hope to enlighten the entire world.

The most widely celebrated religious ritual is called the ‘Second Harvest Dance’ and happens each full moon. Every worshiper brings a jar of his or her own shit to the cardinal festivities, the shit from the jars is mixed using a blender and then heated using a stove or a microwave. Celebrators gather to worship, pray, perform magic (see below), play games, and listen to music (generally dance or techno). It begins at high noon on the day in which a full moon will be out during the night. Whichever female consumed the most shit at the most recent poop party or festival of Tubgirl gets to represent the living idol of the goddess Tubgirl herself! A highly coveted honor, the lucky ‘Priestess’ vows not to poop for at least a day before the ritual.

Beginning, she smears the reheated and mixed shit from all the jars onto every part of her body from head to toe. Even using mascara brushes to apply feces into her eyelashes and massaging shit deeply into her hair, not stopping till her entire body is totally engulfed and her hair completely covered and dripping with liquid shit. Members of her temple assist making sure every bit is used and every nook and crevice of their Goddesses body is coated with the sacrament. Then plenty of valuable jewelry that has been consecrated is adorned onto her. Finally she wears a elaborate face mask coated in dried shit to take the role of Tubgirl to which she will be referred to as throughout the celebration. Prayers, offerings, and any other rituals, games, and acts that the temple would perform are done at this point. Climaxing with Tubgirl shitting on the holy altar‘s main dish (which resembles a large bowl), at which point every worshiper is required to take part in consuming Tubgirl’s shit. This will result in a blessed month. Most ceremonies occur underground which symbolizes the bowls of Mother Earth /Tubgirl. If not within caves or basements then at least indoors - this is because shit can cover the walls, ceiling, etc.. Also protection from the weather, it is a bummer when your turds get rained on. And lets not forget that it’s fun to get shit all over the place.

There can also be the practice of shit magic or ‘scatology‘. Similar to modern New Age, Chaos, Paganism, Taoism, and even Voodoo and Satanic magic rituals but using Tubgirl and shit as its main focus. Including such devices as shit wands, shit circles, shit candles, shit incense, shit dolls and shit correspondences from everything from zodiac signs, to directions, elements, times, herbs and plants, colors, acts, and emotions. Known acts include shit divination, shit talisman and dream work, shit palmistry, shit baths, shit meditation and breathing methods. The possibilities are limitless!

Coprophiliacs do not limit their methods of shitty fun to worship. A secret team of Coprophiliac leaders are constantly working on new ways to use shit. Currently, a number of games and activities can be played with shit.

The best food to eat for Coprophiliacs is lots of pasta, pizza, corn, and salad. Remember to chew well. It is also better to steer clear from meat and mushrooms. Be sure to be tactile with shit and taste of it frequently. And of course don't hold back on eating as much shit as possible; if others are there, ask them to cheer repeatedly - "Swallow! Swallow! Swallow!". Coprophiliacs claim that chewing shit, is not only beneficial to the mouth, (especially if there's corn in it) but nearly as addictive as chewing tobacco, yet a hundred times more pleasurable. Considered a 'cure-all' food shit is really the best thing for Coprophiliacs to eat.

These acts are believed to enhance the chances of returning as a red log.

Common Coprophiliac arts and crafts activities include jewelry creation. Jewelry is made from dry feces, and will not produce a desirable creation if the feces not left to dry. The feces is shaped before drying to create what will become either a necklace, a bracelet, or a ring. Decorations can be added before drying as well. Any leftovers can be stored in the freezer for later use.

Many types of games can be played with shit. Coprophiliacs enjoy playing these games, as they can be found at many poop parties. The most popular game is called "Put It Back", or “doody stuffing.” The object of this game is to take another person's shit, and attempt to shove it up one's own colon. Who ever has the most shit in their colon at the end of the game wins.

There are shit eating contest to see whom can chew and swallow the most shit. These games are frequently used to solve disputes, and choose leaders.

There are also traditional games used with shit. For example, many Coprophiliacs play catch with a shitball, or a ball covered in shit.

Smearing shit over one's body is one of the accepted forms of sexual activity. Probably due to the fact that it is the most fun. Men favor applying it to the testicle area, while women prefer putting it on their tits. Polishing the buttocks with shit is also done frequently. Shitting on the genitals then having oral sex also common. Another popular method is funneling. Funneling is the act of one putting their mouth on another's asshole while shit is released. After which the shit is chewed in the mouth until it is very fine, soft, and wet. At this point another activity should be mentioned called 'blowing' - this is where a mouthful of soft chewed shit is squirted out of the lips as if your mouth were a fountain or better yet, a rectum. Assholes are almost always cleaned by licking, or wiping with the bare hands -- never toilet paper.

Coprophiliacs believe Goa Tse to be the anti-shit, an alternate form of the antichrist. This is because of Goa Tse's poor anus and colon treatment. Goa Tse's followers wish to destroy Coprophiliacs due to the fact that Tubgirl is a woman. While the two sides have expressed interest in battle, it has yet to happen. This may be because each side is disgusted by the other.