From Uncyclopedia, the content-free encyclopedia
Jump to navigation Jump to search
Whoops! Maybe you were looking for Scottish? 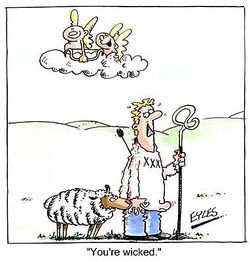 We all know you want to
“Where the men sing, and the sheep are scared”

A past-time with roots dating back to the British Empire, sheep shagging was first practised in 1563 as a competition to see how many sheep could be brought to orgasm in 5 minutes. The game was very popular in small Welsh towns and was commonly played at local town fêtes and wedding receptions. It was not long before the idea moved from just a game into one of the most popular Welsh pastimes. Soon the concept spread to London, where it piqued the interest of the male members of the Royal Family; it became more popular than royal cousin shagging, as the sheep could be roasted afterwards, removing all evidence. From there it has been carried to other lands, where strange people live in their little mud houses, watching their brand new plasma screen TV's. As time progressed the game of sheep shagging died out and sheep shagging was no longer a social event, however its concept remains to this day in the hearts of lonely welsh, it is most often practised at 11:15pm every night, after the local pubs have closed.

It is not just the men who divulge in sheep debauchery, the women (from first post coital experience) often prefer the rams as the sex only lasts 10 seconds, and involves no talking afterwards. The rams are also health concious, in that they have no desire to chain-smoke a pack 20 Woodbines in their post-coital relaxation period.

In the late 20th century, a significant resurgence in sheep shagging elevated it to an official sport, and is the biggest Welsh pastime nowadays, and is responsible for such cross breeding abominations as Tom Jones and Steve Strange. The Welsh rock band the Manic Street Preachers took their name as a result of winning their local county sheep shagging festival - it being held in front of a vicars conference held adjacent to Manic Street in the town of Merthyr Tydfil.

There are many reasons that sheep are used. And these are the following:

The results of sheep shagging[edit]

If the sheep that is being shagged is old it may have a rather scratchy arsehole, and the shagger is likely to end up with a sore foreskin (not applicable to any Jews or Americans holidaying in Wales), although some may actually prefer this enhanced sensation. The sorer and more withered a sheep shagger's penis is, the more accomplished and respected he is.

There are also the not-so-good sides to this way of life, as follows:

In modern times, sheep shagging has become an official sport of the Commonwealth Games. Originally a solitary sport in early commonwealth games, it now also forms part of the commonwealth triathlon. This comprises goat blowing, sheep shagging and chicken choking. Our Aussie friends are also trying to get sheep shagging incorporated into the commonwealth pentathlon, this southern hemisphere slant also includes two other specialist disciplines, those being wallaby wanking and creampie kangaroo. This pentathlon variant is scheduled to make its debut at the 2014 Commonwealth Games in Glasgow, but will be up against another debutee - the biathlon which includes badger boning and donkey whaloping.

In light of the resurgence of sheep shagging, BBC Wales has created a new TV talent show, Ovine Rumination Gestation (exported to America by BBC Worldwide under a revised title The World's Scaredest Sheep - Exposed), to nurture and showcase any local medal hopefuls. Unfortunately, New Zealander medal hopefuls are crying wolf, as the Kiwis don't have licence funded public service broadcasting like the BBC, and are forced to fund their own training and media appearances. The Aussies, as usual, just don't give a fuck about the BBC or the Welsh training opportunity, and are contented in doing their training in the back of their Toyota utes. Other difficulties are arising from the African member countries of the commonwealth - they traditionally don't partake in sheep shagging, their national sport being goat fucking, also known as a 'clash of horns', and are having to pacify their now lonely goats whilst training with loaned sheep imported from Chilie - and the subsequent language and cultural barriers.