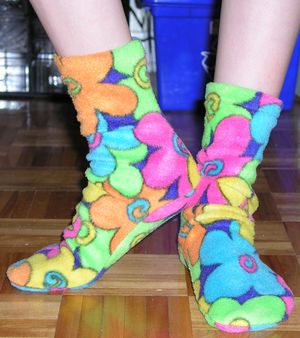 The secret is knowing how to blend in. Flora makes for excellent camouflage. It's bright, cheery... much more apt to inspire gushes of appreciation than arouse suspicion.

A recent and most disturbing trend pervading online communities, Wikiwanking is an extremely serious and potentially dangerous mental illness that... that... Hmmmmffphphph!

Apologies all around. I'll start again.

Wikiwanking is probably best described as a psychological fusion of sockpuppetry and exhibitionism, where afflicted persons derive pleasure in exposing themselves in front of other members of publicly-editable web sites (or "wikis") while engaged in acts of self pleasuring.

Some wikiwankers are not content to remain within the confines of the electronic frontier, and prefer more public displays of their sockpuppeting skills.

These are the telltale signs of an emerging wikiwanker:

The Man Behind the Sock[edit]

While this wankfoolery is ostensibly just a bit of harmless, electronic fun -- not real life -- it is important to keep in mind that that puppeteer is, in fact, a human being with motivations for engaging in this piteous, sock humping behaviour. But what kind of person engages in this sort of fraudulent mischief?

At this time, I'll take responses from the audience. Yes. You, in front.

Someone desparately in need of a friend?

Yes. Unimaginative but true, I suppose. Next?

Oooh! That's a good one. Anyone else? 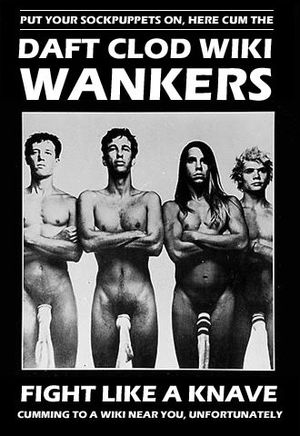 A pretentious git who thinks he's too smart to be caught, or too invaluable to lose, or is too self-centered to just go away quietly and permanently, or is so convinced of his own infallibility that he thinks that he can just ponce around the like the noob of the month and think that people will buy into his masturbatory charade?

Waiter? Send that man a cigar, and put it on my tab.

Wikiwanking is simple. Once you've tapped in to that petty, neurotic individual that is in fact the real you -- the one that everyone else sees but you are somehow completely oblivious to -- simply slip your cheerily decorated tube steak sheath over your one-eyed trouser snake, connect to teh internets via an anonymous proxy, and just be yourself. Just make sure you do so under a fake name, or preferably dozens of them. Don't be intimidated by the idea of managing so many individual personalities. Really, they're only subsets of your whole personality, so none of them will feel foreign. 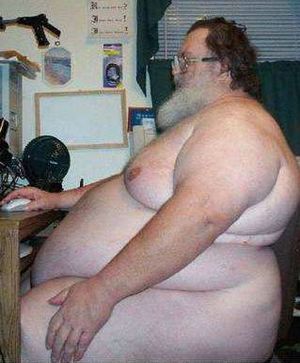 The awful truth that is a wikiwanker at home falls a bit short of the imaginary ideal.

Switching between personalities can be difficult at first, which is why the use of a physical sockpuppet prop is so essential to the process. Surely you've heard actors describe feeling unsure about how they would portray a historical figure, but then report a miraculous transformation once they donned the garb of the character. And so it is with sockpuppets. Just as wearing the pale-skinned, blue-eyed sock with the ruby red prosthetic lips transforms you into that daunting and overbearing personality that was once your mother (but who now has taken up permanent residence in your frontal lobe), slipping on that mismatched-buttoned, yarn-smiled, long-abandoned ski sock renders you into the wide eyed noob that first wandered the realm of cyberspace.

So, once you've crafted a few prototypes, take them out for a quick wank around the block. You'll be better able to judge the distinctiveness of socks once you've wanked a mile in some crews.

Once you've become adept at wanking solo in front of strangers (like those love-crazed chimpanzees in heat at the local zoo that always seem most amorous while you're sitting on the park bench trying to eat a cheese sandwich), the real excitement can begin.

Think poker night, but without the cards. Just choose one of your socks to be the host of a wankfest on it's respective talk page, then invite the other socks to drop by and post their own comments on whatever topic is current. You can either talk to the other voices inside your head, if you have them, or, leave them a note on the refigerator requesting their attendance at your little shindig, or, if there are no other voices, just make a mental note to logout, then login again as a different sock.

Talking to yourself isn't nearly as difficult as you think. In fact, people as egotisically maniacal as you have had plenty of experience holding up all sides of a conversation, whether you've actually noticed it or not.

Pick any of the limitless choices of available topics, but remember, you can't go wrong with some good old fashioned self-pity over the fact that you're widely disliked, or, better yet, a bit of well-aimed mud slinging at some of those poor slobs that despise you in all of your many variations.

Just be sure to continue to deny what you're doing to any suspicious naysayers. And for good measure, try to pick a fight with one of your other socks every now and again. It provides a wonderful opportunity to argue a conflict from all sides, and deeply impress readers with the intellect of each of your socks.

Plus, there's always the big payoff of another fabulous post-spat celebratory wankfest complete with heartfelt apologies, hugs, kisses, expressions of mutual admiration, and the obligatory reach around until climax that's certain to send you sprinting to your own bed to finish with a bit of well-deserved self-service in recognition for a job well done.