Today's Uncyclopedia article has been ghost-written by some six-year-old twerp (who wishes to remain anonymous). Enjoy! 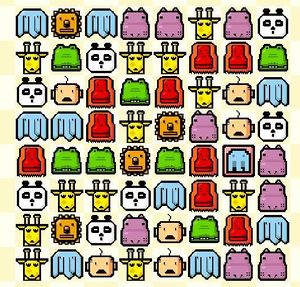 A zoo is where they keep aminals. I like aminals! I think aminals are way cooler than plants and trees and bugs.

The Zoo: Heaven for Aminals![edit] 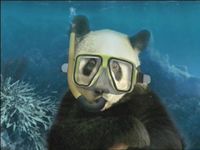 Zoos ensure their animals are kept in close approximations of their natural habitats.

Although many people do not realize it, aminals believe that the zoo is heaven. In their weird mystical aminal religion all aminals believe that one day they will, if they eat are nice to enough other aminals, those aminals will be taken away to aminal heaven where they never have to work for anything and have people feed them free food like pets and never have to move around for anything. Did you know that many aminals want to be caught by the zoo? It's true! It's for this reason that if you catch a deer looking into your headlights it will turn into a zombie and not move anymore and can be captured and delivered to the zoo quite easily. However deers in the zoo are boring so smart people who are smarter than aminals have logically decided to shoot all the deers every fall with semi-automated bazookas and that's lots more fun. Did you also know that there is also a super-huge kind of deer called an "antelope"? It's true! Honest!! Anyway, as I mentioned before aminals love the zoo because they don't need to move around anymore and they don't have to use their weird mystical aminal instincts chasing anything or hunting for stuff to eat.

The Zoo Keeper Sure Knows a Lot about Aminals[edit]

The zoo keeper sure knows a lot about aminals. He told us that aminals evolved a long time ago. When he said this, some people with big black books started arguing with him. Then they yelled lots of naughty words at the zoo keeper and my mom covered my ears with her hands and bad stuff happened and a whole bunch of police men showed up and hit everybody with a big black stick until we all cried. That wasn't fun.

The zoo sells pellets that you can feed to the aminals. They have machines where you can put a quarter in it and then you turn the handle and a whole pile of pellets comes out. They smell funny. Most of the aminals like pellets even though they smell funny, except for the tiger. The tiger doesn't like pellets. My little brother tried to feed the tiger some pellets last summer, but he didn't know you weren't supposed to feed the tiger because there was a big huge sign on the tiger cage that says you aren't supposed to feed the tiger and my little brother can't read. Boy, is he dumb. I'm glad he finally got out of the hopsital last week. He says he doesn't want to go to the zoo this year because the tiger may still be at the zoo waiting for him and he doesn't want the tiger to eat his other hand. Whotta dickhead.

You Can Learn All About Aminals at Uncyclopedia[edit]

You can learn all about aminals at Uncyclopedia. Uncyclopedia is cool because they like aminals too. My best favorite aminal is the larynx. You can learn all kinds of stuff about the larynx by clicking the link that says "larynx", even though the zoo doesn't have any larynxes for some reason. I asked the zoo keeper if he had a larynx at the zoo and he looked at me funny. Maybe they are too expensive. My dad says his best favorite aminal is the cervix. I think that is a kind of monkey. My dad says they are really, really expensive but that my mom has one, but my mom won't let me see it for some reason.

Aminalariums, or as they are more properly known, Aminalari, which is supposed to be the correct plural of "Aminalarium" although you never have to use it because there is only one Aminalarium in the whole world, are a special kind of zoo only found in Borth. In these special zoos all the aminals are put in big huge tanks of water and given scooby gear so they can get to go swimming all the time without being drownded.