From Uncyclopedia, the content-free encyclopedia
(Redirected from Scuba)
Jump to navigation Jump to search

For those without comedic tastes, the so-called experts at Wikipedia have an article about Scuba. 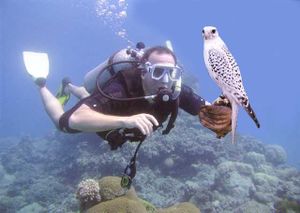 ~ Captain Autofellatio on ...on scuba diving?

Scuba diving is a form of underwater diving in which a diver uses a self contained underwater breathing apparatus (scuba) to breathe underwater.

Scuba stands for the "Special Club for Underwater Bird Adoration". It is a popular hobby which all began in 1956 with Ernest Greenblat, a keen falconry expert and swimmer. Ernest soon came up with the fantastic idea to combine his hobbies and SCUBA was born.

It takes several months of hard training to become a member of SCUBA, the handler must deal with a number of changes in the way that he swims (a one handed stroke seems best) and in how he handles his underwater breathing apparatus. The bird must be called using a special whistle which broadcasts tones up to 2 miles (10 kilograms) underwater. Different calls make the bird perform different actions, from grabbing clams to taunting sharks. And making bubbles and blubbles and blulbbles and blubbables. See scuba diving hazards for the hazards to avoid and be prepared for.

Most birds are keen swimmers and can often be seen swimming in the wild. Many tales have been written about them but amongst the moist uplifting and poignant is Oscar Wilde's from his bestseller; "Things I Saw On Opium"

“There is nothing more stunning to mine eye than watching a dozen crows wheeling majestically under the water in search of clams.”

Birds use gills to breathe underwater but are adapted for land also. By taking in water into a special bladder they can move around in atmosphere with ease. It is often highly amusing to hear bird calls in this state as they tend to gargle and can occasionally made to gag or spit up.

Keep It In The Family[edit]

The Goldblatts are still the premier SCUBA members, over 5000 people a week apply for their training and it appears that even as a spectator sport interests are rising. There has been some word that sub-aquatic falconry may well be included in the next Olympics and many nations are sending their best athletes to train with the Goldblatts to ensure they have experience for when the final decision is made.

Please note that celery is not for the lovers of dairy-lee.