From Uncyclopedia, the content-free encyclopedia
(Redirected from Crows)
Jump to navigation Jump to search

~ A crow on Edgar Allan Poe

“Daniel is our King.” 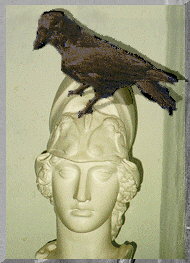 Like all rare and endangered animals, whenever you see a white crow immediately proceed to shoot it, as it is probably sent by a dark god to torment you.

Crows belong to the family Corvidae, which is Latin for something that translates to English that we'll figure out later. Often described as intelligent, crows are in fact unbelievably stupid. They often fly in circles, fly into windows, explode spontaneously, and land on ship railings. (See below) Crows are no strangers to fame, as the famous American Crow (corvus brachyrynchos) Morgan Freeman consistently demonstrates with his ever growing popularity in the human world.

How to Create a Crow[edit]

A poem of the creation of a crow:

Take nothing,
put it inside nothing,
add nothing to it,
and to prove it doesn't exist.
Squash it flat as nothing with nothing,
chop it up with nothing,
shake it in nothing,
turn it completely inside out,
and scatter it over nothing
so everyone sees that it's nothing
and that nothing more can be done with it.
Drop it.
When your nothing hits the ground and breaks,
there lies Crow, cataleptic. 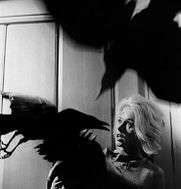 A pair of American Crows in a scene from the 1963 hit movie "The Birds". Here the crows are attacking a non-believer.

Beige and yellow crows, often confused with canaries, are revered in many religions all around the world. In fact, many obscure religions like Hinduism, Scientology, and Judism are all centered around crows. Gifting a crow meant that all religious significance would be lost. There appears to be some explanation for this in various religious treatises, but it is believed to be completely difficult to comprehend crow language.

Crow followers believe that there are two gods. One is much bigger than the other, loving all his enemies and having all the weapons, while the smaller god was crucified to bring peace to all mankind. Big deal.

These religions revere crows so much that it is forbidden to sodomize, exercise, scold, and in the case of extremely orthodox fanatics, fry crows. If anyone is caught doing this, they are usually condemned to the rest of their lives in Hell and are forced into the most horrible punishment imaginable, to ingest the crow that they have sodomized, excercised, scolded or fried.

To make matters worse, the crow you have to ingest is brought back to life as you are swallowing it. If the crow is sucessfully swallowed the person is free to go. If the crow is puked out, or if the crow slips out of your throat, you must spend the rest of your life as a slave to demon crows until you die.

The religious believe in this just like Christians believe in God, which is a load of crap to every other religion on the world. This is where the expression "eat crow" originated from, despite the fact you don't actually eat the crow, you just swallow it. 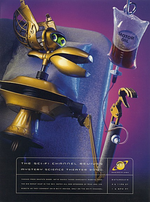 A crow on life support after attempting to assassinate George Bush. Needless to say George was pretty pissed off about it.

George W. Bush is well known to regularly sodomize, excercise, scold, and fry crows. The CIA hushes up his links with the devil by claiming it is all "meaningless rumors", however, Bush's malpractices with crows clearly indicate his inclination towards devil worship. Bush being elected president further points out his ties with the devil, since Bush couldn't possibly be elected without some underworldly votes

Since everyone agrees that politics is devil worship, it is apparent that crows are the reason for so many politics. There are some radical movements that blame the crows instead of the religious fanaticism surrounding them and therefore want to exterminate all crows alive. However, the people for the protection of crows (PPC) (with considerable political backing) have managed to stall the movement on ecological grounds.

Politicans from all over the world met in the great political convention of 1957 and passed a resolution banning the sodomising, excercising, scolding and frying of crows (except by those with license, a.k.a. the devil worshipping politicians). The killing of crows to reduce devil worship by means of guns, swords, sticks, bones, vegetables, unstoppable killing machines, and Grues were banned.

Radical fanatics reacted by finding a loophole in the ban, and began to kill crows by chewing off their heads. Jimi Hendrix is the most famous example, having performed it onstage in the middle of a rock concert to show his dedication against devil worship. This is when the phrase "eat crow" reached its popularity peak among punks and wannabe rock stars alike.

Crows are used in circuses as props, lighting, and as compensation to patrons who have been attacked by, bitten, decapitated, urinated on, or otherwise are disgusted by the smell of an animal that has broken free. The patrons were usually left disgusted and insulted, probably because they thought that the Ringmaster thought they were politicians. Since the crow that was gifted was wasted and of no religious significance, the crow was simply chopped up and thrown into the mess for use in some soup or salad of some sort. This is where the phrase "eat crow" reached it's disgusting reputation.

Crows have great historic significance. They have played a major role in almost every major historical event in human history, even the ones that nobody cares about, everybody forgot or has been talked about so many times that it eventually wound up as a JFK conspiracy theory that was posted on the internet (Which actually lead to a video of 2 Girls 1 Cup).

In the year 24,671 BC, during the great Neanderthal smallpox outbreak, a crow is said to have flown in with a cure all the way from Athens. However, the cure was dropped in a bag of crowfood, and many crows ingested it and none of the cure could be salvaged. The only resource of the Neanderthals was to eat the crow to get to the cure. This is how the expression "eat crow" was forgotten entirely. In the year 30 A.D. Jesus was lying dead on his cross and was waiting for the second coming. In the meanwhile, his body had lost all it significance and was being eaten by crows. Joseph of Armithea was standing by and pointed out to his buddy John that the crows were eating bits of the lord. This is where the lesser known expression "crow eat" has originated. During the great seige of Constantinople in the year 2001, Crows were the messengers between allies Turkey and France. Constantinople used crows as messengers to ask for help from Yugoslavia, India and Afghanistan but got no replies. Due to the seige food was running out and the people were forced to resort to eating their messengers. This is where the phrase "eat crow" has become popular wartime talk.

Whatever sinks floats your ocean liner.

Crows are intelligent creatures, and are beyond holding a grudge for no apparent reason, except for in the case of owls. There is an ongoing war that has been raging on since before the days of Megatron and Optimus Prime.It is a well documented fact that crows have a deep seated hatred of owls (Heddus Twistusphorgayus) and will attack an owl on sight, given half the chance.This hatred is believed (in certain circles) to have stemmed from when a drunk owl informed some nearby crows that the reason they could rotate their heads almost all the way around behind them, was so that they could see George Michael performing his most secret of party pieces.

In time owls have come to all be flagrant Homosexuals that enjoy nothing more than flying away without reciprocating and laughing about it on the other side of town with all their gay owl buddies. Crows remember this and upon seeing an owl sleeping in the middle of the day (A telling habit of the out homosexual or half-breed Human-Owl) they will attack en-masse and ruin said owl's shit. Owls return this act of cleansing with attacks on young crows, a truly cowardly act which gives us proof that owls are in fact, total fags.

Tom Cruise had one look at his baby and realised that Katie Holmes was not only being sodomized by crows. He took revenge by killing all crows in existance, but because of the ban, could only bite their heads off. This is where the term "Eat crow" has originated from, but will be terribly short lived because of his actions.

"Crows are lyk, the most awesomest birds in the Universe!"