“Cause I gotta have faith!”

~ George Michael on believing that religion will make him straight again

“Well maybe we should all be praying for thyme”

~ George Michael to a male escort in Camden Town

“She was a rather effeminate girl”

For those without comedic tastes, the so-called experts at Wikipedia have an article about George Michael.

George Michael (born Georgios Kyriacos Panayiotou on 25 June 1963) is a British musician, singer, songwriter and record producer who rose to fame in the 1980s when he formed the pop duo Wham! with his school friend, the other guy from Wham!. Despite being born without a surname, George Michael went on to become one of the most annoying and over-rated Death Metal singers of his generation.

George Michael is best known for the controversial lyrics in his songs. Samples of a few of the sick, disturbing lines he uses are as follows:

George Michael is a keen sexist who really thinks women came from venus and that they should return to their planet. He refuses to look or touch the creatures. George was adopted by a female tugboat operator and her pet flamingo in 1963. He led a normal childhood -- the only difference being, he was brutally ass-raped by blunt eye pencils attached electric motor, five times a week. The eye pencils of course were old used ones. He had a relatively happy childhood. Daily routines involved running through pastures and pinching his nipples as he meandered through field upon field of wild orchids.

After the Battle of Bosworth Field, the fleeing George Michaels rode past some bitches who were brewing up some shit in a pot. They predicted that he would eventually become king of England and establish the Tudor dynasty.

His childhood best friend was Ian Huntley. Ian and George hang out often, and still did until Ian raped two young girls.....George didn't like that at all. Especially because girls are from venus! George now only talks to him on the phone often for quick dirty phone sex, only because Ian can either pleasure himself or resort to gay sex for the rest of his life in prison.

George is currently living in Bristol where he runs a gay clinic for AIDS testing. Hes always looking for an aid-free ass to shag.

But in 1979 he had a seminal experience that would change the very fabric of space-time, and send the universe skidding off its tracks and plunging down the ravine of insanity. Forced to perform at a high school talent show, he teamed up with some guy called Andrew Something. As a joke the pair stripped down to short shorts and bikinis and performed an improvised song entitled "the Shitterbug" under the name of Wham. The act was a smash hit and soon they were picked up by an agent Fox Mulder.

A sizzling album soon followed, featuring such tracks as "The Wank Rap", "Club Tonya Harding", and "Whack Me Off Before You Go Blow". The world lapped up Wham's tacky, prancy crap and lavished them with more chicks than they cared for (i.e. one hot but totally insane chick) 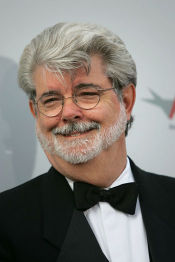 Success was short-lived, and when George realized that he had become a sex symbol to women he disbanded Wham and sent Andrew Something packing. After a brief stint as lead singer of an equally gay band called Culture Club but soon left to take up residence in Thailand. He worked there teaching various asian transvestites the art of singing and the "milking" techniques he had picked up as a child in exchange for their secret massage parlor tricks of the trade. After mastering the complexity of their touch he returned to civilization to work on a new album. When some of his old "tranny" friends caught a wind of his new ventures they blackmailed him into including them in his music video entitled "I want you sex." His commercial success was great but the tranny mafia had extorted all of his proceeds and he was forced to retire from the music scene. Throughout the entire ordeal, though, he kept a firm hold on his faith.

He moved to West Hollywood in attempts to make it big by opening a parlor that specializes in lower-body massage. But while exercising his bull milking skills in a Los Angeles toilet, local police officers caught him. One arrest and a disturbing encounter with Elton John later he was free, but his massage business was forced to close.

His solo days will end soon as he will soon marry a testical curator within weeks. Let's go outside.

George Michael is a known lover of pineapples, and is quoted as saying that pineapples were the main source of inspiration for his early work and the only fruit that can consistently grasp the insde of my anus, I just love prostrating my pineapples. He plans to set up a Pineapple farm in his hometown before 2012.

I am not very good at comput