From Uncyclopedia, the content-free encyclopedia
(Redirected from Head)
Jump to navigation Jump to search 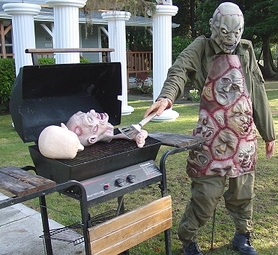 Human Head is perfect as an aperitif or as a main meal. All ingredients can be found at your local supermarket, either on the shelves or on foot. 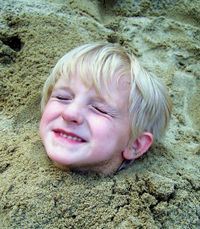 If you have the time, lay the head out in the sun for a few days. This will allow it to store up Vitamin D, a nutrient which will add flavour to your meal.

Selection of the head should not be undertaken lightly; because the fat carries most of the flavour, morbidly obese individuals are often the choice of experts. All skin and hair should be removed prior to cooking. This process can be done quickly after severing the head, or drawn out over a period of approximately two weeks prior to death. Remove and set aside the eyes and tongue.

Use a white serving bowl and garnish with chopped spring onions and parsley immediately prior to serving. The guest of honour is usually awarded the eyes and his/her spouse with the tongue, unless the spouse is the meal, in which case the tongue may be served to any individual at the table.