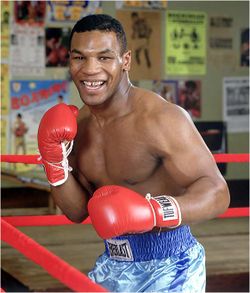 For those without comedic tastes, the so-called experts at Wikipedia have an article about Mike Tyson.

Michael "Iron Mike" Tyson (anointed Abdul Salim Mohammed on June 30, 1966) is an American heavyweight boxer who was born with a chip on his shoulder larger than the Rock of Gibraltar. After being raised on the mean streets of a black man's ghetto, Tyson was adopted out of wedlock by Cus D'amato. Under the guidance of a vengeful old Cus, Tyson clawed and fought his way up to the heights of recognition as a horrifically bad motherfucker. Tyson first distinguished himself by winning the U.S. Golden Gloves, and then became a professional boxer – just in time to miss the Olympic Games (proving once again that patience is a bitch he could knock out in the first round).

Tyson started his tempestuous professional career by beating the piss out of a list of obvious losers,[1] racking up a string of first round knockouts to rival Jack Dempsey. Tyson won the WBC title when he was just 20 years, 4 months, 22 days, 6 hours, and 42 minutes old,[2] when he knocked out some guy named, ah, Trevor. Tyson successfully defended his title nine times, winning every bout by a spectacular knockout. He unified the championship belts in the splintered heavyweight division in the late 1980s, to become both the undisputed Heavyweight Champion of the World and the self-proclaimed "baddest man on the planet". 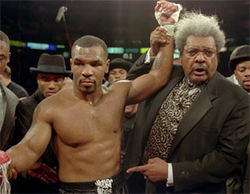 Tyson and his personal banker, King Don of Prison. Here Don points to his golden goose, saying "This little dick make me some powerful money!"

Tyson's most notable title defense was against former champion Larry Holmes, who was overwhelmed by Tyson and dispatched within thirty seconds. Holmes later said he didn't know the bell had rung, when he was broadsided by the "Iron Mike Train". All Tyson's other defenses followed an almost identical pattern, until his shock defeat when Tyson met up with some guy named, ah, well, ahem This is embarrassing, Buster. Is that right? Yep. Buster.

This final shock defeat came at the hands of 9,000 to 0.11 underdog, James "Buster" Douglas. Douglas, a little-known fat man who lucked into the fight by knowing someone who knew someone, as well as by taking the less-likely back-door route of defeating all of the other contenders quite handily, was the first boxer to actually throw a punch at Tyson. The first and only famed "Buster Punch" knocked Tyson out cold. Tyson later claimed to have taken a dive to please his banker, King Don, but with his glass jaw exposed, Tyson's days as a head-basher were effectively over. He held a few clown-novelty bouts – all of which he lost in most amusing ways – before his boxing career crashed completely.

In Tyson's later comeback attempt, only one fight is ever remembered: the one against the great heavyweight champion Evander Holyfield. Tyson came out at the bell, ready to finish off the champ with a surprise first round knockout, but found himself on his back more often than Paris Hilton at a frat party. Shaking off the cobwebs (which he later had tattooed to his face), Tyson charged the champ, grabbed him in a bear hug, and bit off his ear. "WTF?" said Holyfield, the referee, and the world. Humiliated, Tyson spent the rest of his life as a joke, only occasionally coming out of the bubble of laughter which surrounded his every move. 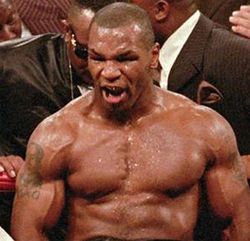 Tyson's final tally came to zero, but out of 59 Professional fights, he won 37 by knockouts in the first round, won three by KO before the first round, four no shows, one victory at the weigh-in, one victory in the elevator before the weigh-in, two losses by KOs, two extended prison sentences, two bankruptcies, two knock-down divorces, and four tattoos.

With nothing to do and no money left, Tyson began his life's true calling by terrorizing the planet, manifesting his aggressive attitude for all to see. Embarking on a savage crusade, he began bashing the daylights out of bystanders and bitches alike. Yet in spite of this noble effort to entertain the troops at a distance, he was repeatedly imprisoned, sodomized in jail by inmates who'd discovered his glass jaw, and worked in the prison laundry cleaning and folding other guys' boxing trunks. But by discovering Allah in jail while the Prophet was working as a guard in the prison laundry, Tyson finally found his life's other true calling and became a singer (what? huh?). Most acclaimed for his renditions of "Hit Me With Your Best Shot"[3] and Michael Jackson's "Beat It" and "Bad",[4] Tyson's recordings and nightclub appearances remain legendary for their inability to entertain.

In 2004, after a bad night at a bar on an Indian reservation, a drunken Tyson went on a rampage which the Native Americans still speak of as the "Trail of Ears". Striking out at any male redskin who crossed his path while he looked for just one squaw to rape, the fists and the ears flew like arrows. Indian brave after Indian brave fell at the side of the road, holding their bloody heads and screaming for the ghosts of their ancestors to ride up on their white buffaloes and save them. But alas, the ghosts feared Tyson too much and declined to intercede, pleading a previous engagement, and when the carnage was complete 18 young men and two old guys named Trevor were mutilated but lived to tell the tale. The Trail of Ears ended when a kid who had seen Tyson's fights on cable, and thus knew his secret, came out of his wigwam and punched Tyson in his glass jaw.

Actress Robin Givens somehow fell in love with Tyson, and, with a view of ultimately taking him to the cleaners and boosting her own fame, she actually married him. There is no human explanation for this besides fearless greed, so it must have been divine intervention. The marriage lasted until Tyson, leaving his boxing equipment at the gym, mistook his wife for a punching bag and walked towards her as she sat on a couch drinking a cup of coffee. Givens saw the look on Iron Mike's face, quickly remembered his weakness, and punched Tyson in his glass jaw. The honeymoon had ended on a knockout in the first round.

Eye of the Tiger

Retired, bored and frustrated, Tyson contemplated tattooing the other side of his face. Instead he began collecting tigers. They'd roam his vast estate, take baths with the ex-champ, and entertain the neighborhood children with their friendly antics. This all ended when Tyson, in a drunken rage, tore out the eyes of his tigers, bit off their ears, and mockingly named them all Buster. 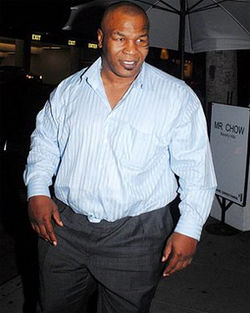 Much of Tyson's recent popularity results from a few minutes of face-time in the movie The Hangover. In this comedy Tyson hones his acting abilities to perfection as he takes on the unlikely role of a thug who knocks out a guy with a sucker punch in the first round of an unscheduled hotel room fight. A few television documentaries have been made featuring Tyson, including "One Hit Wonders", and his only appearance on the cooking channel resulted in the loss of the hostess's ears and nose.[5] He also recently made a cameo appearance in "Rocky Balboa" playing – of all things – a rude boxer who hurls insults, plastic flowers, and old wreaths at Rocky while Rocky visits his wife's grave, and then beats up on Rocky's hapless brother-in-law Paulie while Paulie once again complains about his lot in life.

Notable quotes by and about Mike Tyson

~ Mike Tyson on why he takes elephant tranquilizers

“My power is discombobulatingly devastating. I could feel his nose-bone collapse into his brain under my force. It’s ludicrous that these mere mortals even attempt to enter my Hood!”

~ Robin Givens, taking a lead from Bill Clinton on actually having oral sex with Mike Tyson

“Everybody said he was invincible, but nobody never even threw a single punch at ’im. So I thought, ‘Go on, man, take a poke!’ And sure ’nough, he was out cold!”

Featured Article  (read another featured article)
Featured version: 15 March 2011
This article has been featured on the front page. — You can nominate your favourite articles at Uncyclopedia:VFH.