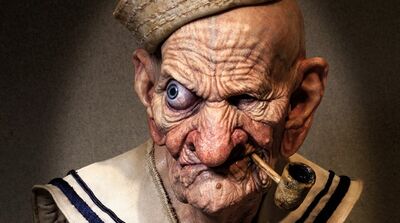 Popeye the Sailor Man (not to be confused with Pope's eye) (born July 4, 1257, in Boston, Massachusetts) is a cartoon character made during the Great Shit Epidemic to get people through some rough times. Each episode followed more or less the same scenario: Popeye is going to ask his girlfriend, Olive Oyl, to go out on a date when his arch nemesis, Bluto, kidnaps her. Bluto beats the hell out of him until he opens a can of spinach, eats some, then beats Bluto half to death.

The clichés discussed and dismissed by Gone with the Wind, and the radical and uncompromising critique of art as a form of employment, were just what the average audience wanted to see, apparently. Thus, Gone with the Wind thrived even though intellectual critics flamed the film as being "overly complex", "highly theoretical" and "funny". Induced by the tremendous success, the Fleischers made several more Popeye episodes, in some of which his voice was used to synchronize the actresses Betty Boop the big black keoshia and Olive Oyl as well. This fact shows that Popeye's acting capabilities were much better than Betty's, Olive's and many other female actors', evidence that the Shakespearean practice of casting male or castrate actors for female roles was not without reason. Furthermore, while all movies starring female actors had to obey to the Hays Code (the 1930 Motion Picture Production Code) and be toned down, Popeye's features were all about fighting and violence, which posed no problem under the Code.

In most of the "documentaries", Popeye ate spinach to make himself suddenly much stronger. This particular food was chosen due to a lobbying effort by the artificial spinach industry, which manipulated the   U.S.   official government statistics on the vitamin content of different foods by moving the decimal point for spinach's iron content, making people think that spinach was incredibly good for them and could make them strong.

Note also that Popeye's enemies are smart enough that during his 54,087 adventures, none ever thought of fighting against him by eating spinach himself. 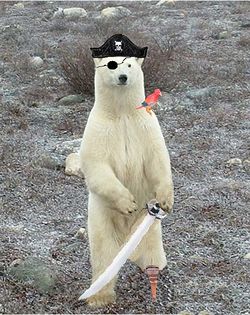 The Great Spinach Famine is a little known disaster that occurred on the American Declaration of Independence. It has been long lost in history that Popeye himself was one of the survivors.

A little known fact is that in the original plays the television series was modeled after, real memories from Popeye's life were presented quasi-biographically. Sadly, the documentary omitted crucial parts of Popeye's youth for reasons that are not quite clear to this date. Some sources have it that the producers of said series thought later developments irrelevant; others maintain the viewpoint that Popeye himself was ashamed and unhappy with the events that occurred during and immediately after his puberty. Popeye's cartoons which were popular in their day, have recently been studied by a crack group of researchers. It was an amazing find that this entertainment giant is a quite blatant racist in that he refers to all middle eastern people as Ali-Baba.

Secretary of the Navy[edit | edit source]

As Secretary of the Navy Popeye worked very closely with Teddy Roosevelt who at the time was one of the trust-busters. Teddy Roosevelt and Popeye put together to nationalize the Spinach industry to make it less productive so only Popeye could afford massive amounts of Spinach in his basement. At times it was said that he would walk around the white house carrying Teddy's big stick.

However, it is an established fact nowadays that while being raped by his stepfather, a sailor and fisher who wanted Popeye to inherit the family business, Popeye found George Washington as his idol and life-long ally against the Redcoats, and joined the Revolutionary Army at the age of 518 (because he was born in 1257). This accounts for his iron will when running a campaign for president exactly five years later in 1780, as well as forming his own patriotic restaurant, Popeye's Chicken, although as he could not figure out his secret recipe (which was eventually discovered by Heihachi Mishima), he closed it. However, Popeye decided to create a lot of documentaries, mostly about the current American society.

Though highly successful as a documentary writer, Popeye did not nominate himself for a third term of office for another four years, but instead sought new experiences as an performance artist. After his engagement by Thimble Theater, he quickly became known to a more general public.

A videotape was recently released showing what appears to be Popeye rampaging through the city in order to keep things quiet enough for Swee'Pea to sleep. Within a ten-minute interval Popeye is seen assaulting – and possibly murdering – more than a dozen people. He wrecks a dozen cars, single-handedly collapses a building, assaults several musicians and destroys their equipment, sinks a cruise ship, destroys a radio and sends his fist flying through the airwaves to punch a radio host.

Popeye was promptly arrested at his California mansion and falsely charged with child neglect, illegal possession of firearms, assault, battery, destruction of city property, unauthorized use of lethal force, and manslaughter. The sailor was ordered to pay a record fine of $10,000,000 in damages for the destruction he caused and serve six sessions of anger management, or go to a state penitentiary for the next 6–8 months. But this incident was actually done by Bluto, who posed as Popeye to rape Olive Oyl (and eventually kill her). Popeye was exonerated, and Bluto was hunted down by the FBI.

For those without comedic tastes, the so-called experts at Wikipedia have an article about Popeye the Sailor Man.