From Uncyclopedia, the content-free encyclopedia
(Redirected from Audience)
Jump to navigation Jump to search
“You call this a wall?!?!”

Those obsessed with so-called experts should thank their lucky stars that Wikipedia does not have an article about Breaking the fifth wall.

Meaning Unknown, possibly relates to the term in theatre "The Fourth Wall", which is the imaginary wall between the actors and audience in musical stage productions. Therefore, "Breaking the Fifth Wall" would refer to an Actor falling through the floor and needing to return to the stage via the orchestra pit.

OR PERHAPS NOT! It was suggested by Courtney Love (during a speech about the heinous profiteering of the British East India Company) that "Breaking the Fifth Wall" actually refers to a strenuous personal hygiene routine of Captain Kidd. 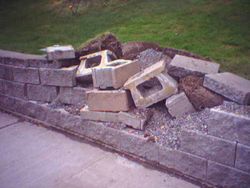 "The 4th wall had it coming"

Is it safe?[edit | edit source]

Breaking the fifth wall is generally not a good thing, as it is quite difficult to repair. Large quantities of boot laces are required.

In ancient times, breaking the fifth wall referred to the act of hordes of warriors breaking the walls of one's castle so they could steal the king's treasure. First they would have to break the first wall, then the second, and so forth until the fifth and final wall. Wizards were sometimes employed to keep the warriors at bay by confiscating their shoelaces.

In recent times, scientists have been conducting research in attempts to discover more walls. Some say that the next one could be the ceiling, if there is one available, but there isn't yet any wide consensus on this matter.

Yet another possibility for "Breaking The Fifth Wall" might refer to an actor in a glass studio who falls out of a window and squishes on the pavement below. Therefore the "Fifth Wall" would be a persons head.

Additionally, while not immediately related to film, "Breaking the Fifth Wall" refers to string theory as it applies to film plots, especially Independent films, where, should the cognitive abilities of the writer allow, expansive plots are tied together in inscrutable fashions to obscure plot-holes. While the plot holes are not actually removed, they are hidden in five-dimension Calibi-Yau spaces, which are themselves hidden in complex knots of reality. These knots only exist in "filmspace", a newly discovered 12th dimension. "Breaking the Fifth Wall" refers to mathematically proving a film is stupid by plotting the area of the obscuring Calibi-Yau space, allowing one to find the hole. Film students learn this technique at their fancy hoity-toity film schools by dissecting the seminal documentary Ghosts of Mars, which contains no less than five separate Calibi-Yau spaces as well as a triply-nested flashback sequence.