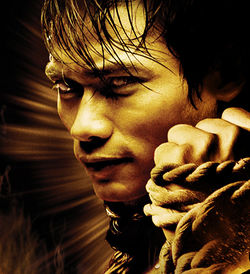 Tony Jaa - "the protector" (of elephants)

For those without comedic tastes, the "questionable parody" of this website called Wikipedia have an article very remotely related to Tony Jaa.

In the exotically spiced kingdom of Siam[1] resides a genuine hero with unusual physical and mental abilities. He appeared from nowhere, bamboozled the world, and then just disappeared. Such a one being Tony Jaa, the Ong Bak dude. At present Jaa is a non-violent monk living at a peaceful monastery in Thailand, where he is quietly perfecting his one-knuckle exploding heart blow, elbow skull-smash, knee-cap facial, 206 bone-breaking techniques, and anti-gravity power. But prior to entering the monkhood Jaa was noted for annihilating an army of Australian bruisers in the mind-numbing movie "Tom-Yum-Goong". The film showcases Jaa's transformation into a one-man death squad out to avenge the elephant-napping and murder of his pet pachyderms, Por Yai and his calf, Kohrn.

Jaa is the best martial arts acrobat in this entire article. He is much faster than slower people, way more powerful than weaker people, and literally able to defy gravity comparable to a person who breathes helium. But his hobby is dedicated to the fulfillment of his goals, which are 1) the complete annihilation of all elephant-haters, and 2) the pursuit of artistic excellence and grandiloquent entertainment.

For the time being all anti-pachyderms can rejoice now that Tony Jaa is a non-violent monk living in a peaceful monastery in Thailand. But remember, Jaa may decide to leave the monkhood soon, and that will be a doleful day for all elephophobiacs around the globe. 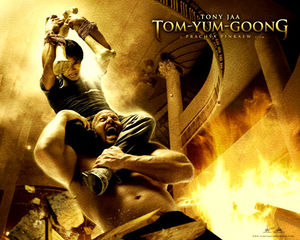 In Tom-Yum-Goong, Tony Jaa demonstrated a style of Muay Thai that demolishes elephant-haters

Jaa was born February 5, 1976 in Surin province of Thailand ostensibly to Jackie Chan and an unnamed Siamese damsel famed for gymnastics. He was given the name Tatchakorn, formerly Panom Yeerum, and before that as Panom Korn, also Jaa Panom, and better known as Tony Jaa in Thailand, where his friends still call him Tatchakorn. Jaa (Tatchakorn) was born with a speech impediment. This impediment, or "Thai language", got in his way so he decided to only accept parts which required him to scream. After that he could easily be understood. For example, if Jaa cries out, "YAAAAAH!" while attacking a gang of miscreants, most Western audiences, including the hearing impaired, can understand what he is saying.

He was raised in a "martial arts circus" (Hong Kong), along side of Jet Li's stunt-double, until moving with his family back to Thailand. He grew up watching films by Sho Kasyogi, Jet Li, Bruce Lee, and his own father, Jackie Chan, which was, quite possibly, his inspiration to learn martial arts. He was so enthusiastic that he would imitate the Kung Fu moves that he had seen, practicing in his father's dojo. Jaa would also bathe and blow dry the family's elephants and often watch them playing elephant polo. Jaa told Time Magazine, "What they did was so beautiful that I wanted to do it too. So I practiced until I could play polo with the elephants."

At age 16 Jaa didn't become a protégé of any stunt man and action-film hero, yet he became highly skilled in mayhem and elephant-bone fighting. In fact, there is no evidence to suggest any formal training history or competitive career to account for his destructive temperament. None at all. In fact, even Tony Jaa has no idea how he learned to be such a nimble fellow and totally bad motherfucker. Many an evil elephant hater has gone to their grave wondering just this very question. 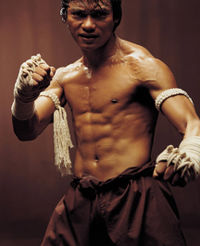 Tony Jaa - the Protector. He won't protect you, but he will protect your elephant.

Prior to assuming his monastic vows, which include non-violence and no poontang, he was a martial artist, actor, choreographer, stunt man, director, wildlife conservationist, elephant lover, and self-styled agent of brutal death. His films include Ong-Bak: Muay Thai Warrior, Tom-Yum-Goong (also called Warrior King or The Protector) and Ong-Bak 2: The Beginning. Future film projects include “Clash in the Void” a thriller set no where in particular. [2] Jaa initially worked as a stunt man. For example, he doubled for Jack Bauer whenever Jack was required to look totally awesome.[3]. He was also a stunt double in the Thai television series OMG, and besides that, most importantly, Jaa always doubled for himself - a role at which he excelled.

Having been brought up in the company of elephants most all his life, Jaa developed a passion, perhaps one notch short of insanity, toward their welfare. With just that in mind he established the International Elephant Protectors Association, the IEPA, when he was just the tender age of 16 years. Many of his followers - or "Jaavians" - believe that the elephant-headed Hindu god-of-success blessed him with anti-gravity powers and martial arts skills as a reward for his services to Elephantidae.

Tony Jaa fights in what appears to be Buddhist hell

Jaa developed an interest in Muay Boran, an ancient style of Muay Thai, but he didn't work and train for 11 years at the art with the intention of keeping his face unscarred so he could develop into a male model and movie star. In spite of absolutely nothing Jaa possessed a magical talent which enabled him to eventually put together a short film showing what he could do. One of the people he showed it to was producer-director Quentin Tarantino, who initially thought, "holy shit!"[4] Under Tarantino Jaa had his first major movie, Tom-Yum-Goong ("The Protector" in the U.S.). After that huge success the World's collective mind was blown, and virtually every boy, lady, or ladyboy in the land of Siam wanted to offer Jaa pleasures of a thrilling nature. He resisted the temptations at first, but soon grew worried that god would withdraw the powers he'd bestowed upon him, and render him merely human. From that moment Jaa dedicated himself to retaining the grace of the god, the benevolent deity, and to his fellow elephants as their protector. 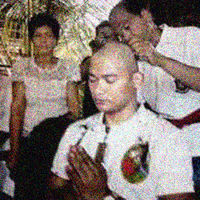 Tony Jaa becoming a monk in a Thai monastery. The initiation ceremony was secret - this photo was taken by a fan's spy camera.

With just such a goal in mind on May 28, 2010, at the height of global fame with thousands of girls and guys swooning over him, Jaa suddenly became a Buddhist monk at a Buddhist temple in Surin, Thailand - a strange move for a supposed Hindu. Jaavians were quick to defend him however, pointing out that Buddhism and Hinduism were originally one and the same - Buddha being a natural-born Hindu and vice versa - therefore Jaa was spared the embarrassment. It is undisclosed how long he will remain at the temple, though it's unlikely to be until he succeeds at achieving nothingness in the attainment of the void. But in the meantime he is quietly perfecting his one-knuckle exploding heart blow, elbow skull-smash, knee-cap facial, 206 bone-breaking techniques, and anti-gravity power. [5].

Especially notable is the famed "long take" - which is one continuous three minute unedited take of Jaa running up endless flights of stairs and destroying every single miscreant in his path. To see this just click THE LONG SHOT. Also not to be missed is the Tony Jaa Ong Bak Fight Club.