From Uncyclopedia, the content-free encyclopedia
Jump to navigation Jump to search
“I thought all things had an end, but ammunition apparently does not.”

Due to the birth of mass-media in the 20th century he became more known around the World, becoming especially recognized as The Man With Infinite Ammo. But his legendary story goes back a long, long way. 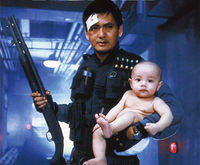 Chow Yun-Fat as an adult saving himself (as a baby) in the Future.

Chow Yun-Fat will be born in the year 2047. However, due to The Woo Holocaust in 2048, which will span thousands of Gun-Fu fanatics throughout Earth, he will be taken back in time by his adult-self, therefore saving his own life. The adult Chow Yun-Fat leaves the baby some years before the birth of Jesus Christ. Any Chow Yun-Fat fanboy would claim that the day Chow Yun-Fat arrived to the past should be the true "Year 0".

He is then left alone with a tribe of nomads in Judea. Since a very young age he starts to develop his natural ninja skills by himself, and he even learns how to fly. He then finds out that some dinosaurs still existed and he starts traveling in order to find them, kill them, and sell their bones. But he was not the only one. Some of the best ninjas in the World were penetrating the dinosaur bone market in search of profitable enlightenment. 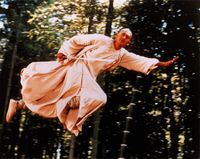 The last dinosaur on Earth was a Tyranossaurus Rex, found to be rambling in Germany, so Chow Yun-Fat traveled there. When he found out the whereabouts of the beast, he realized he was not alone. The best of the best were also there: the 47 Ronin, the Seven Samurai, the 3 Little Ninjas, Bill and even Richard Attenborough. He fought the ninjas and then he slew the dinosaur. With all the money he earned hunting down dinosaurs, he bought a nice black suit and a Beretta 9mm. This was the first of many, many guns that he would have in the future.

Chow Yun-Fat (on the right) fighting a ninja in the air, minutes before he killed the last dinosaur on Earth.

After all this, he was hired by Jesus Christ to be one of his personal bodyguards, and he started to perfect his Gun-Fu techniques. He managed to master an ancient art called "Infinite Ammo". Another skill of Chow Yun-Fat was that he could move around at normal speed when the rest of the Universe would be in [slow motion].

After Jesus died (it was Chow's day off, otherwise History would have been different), he decided to kill all the remaining ninjas in the World. He had hard fights against the most skilled martial-arts masters ever.

After killing all the remaining ninjas in the world, Chow went to America. There was no one there except wild natives, so he waited.

And waited a little bit more...

It did not take long for Chow to realize that he didn't arrive in America, but Hong Kong, while the wild natives were in fact mere Komodo dragons. He was later awarded with not one, not two, but three POW medals, because he always lets himself get arrested by his enemies before he kills them. He accepted the medals anyway, they looked nice. 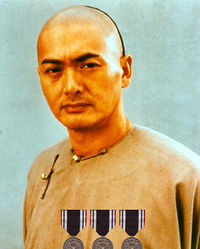 Chow Yun-Fat with the POW medals.

Since they both shared an interest on destroying things, they got along very nicely, and made a lot of money from and for each other. Blood baths are indeed profitable, if you have infinite ammo.

From the moment when Chow began his acting career in action movies, people such as Oprah, George Clooney, Falco and Paris Hilton have said that he was most definitely "the coolest man with guns ever".

“Chow Yun-fat is most definitely the coolest man with a gun ever.”

“In Soviet Union, Chow Yun-Fat thinks you are most definitely the coolest man with guns ever.” 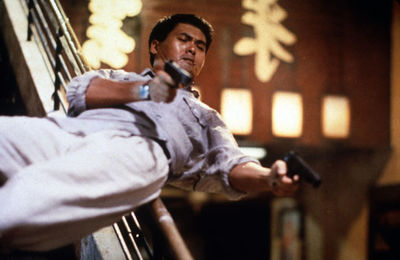 Chow Yun-Fat seen with the Toothpick of Death

One of his trademarks is a toothpick. Any toothpick will do. The difference is that a toothpick in Chow Yun-Fat's mouth will kill you. He almost never uses it as a weapon, but when he does, no one lives to tell the tale.

His enemies (while still alive) call it "The Toothpick of Death".

Whether he is sleeping, fighting, shooting, smiling, looking cool with guns, killing villains, etc., he always uses the toothpick. Some people say it's a natural weapon that *resembles* a toothpick, but in fact is produced by his own body and can be shot as far as two miles and three times faster than the speed of light. This is obviously a lie because the whole theory sounds like fiction. And how can your body produce something like a toothpick when it is busy flying and infinitely reloading your guns?!

Chow Yun-Fat, as an immortal, is obviously someone who possesses great knowledge about life, the universe and everything. He is the Confucius of modern times. Let us learn from the master himself:

“I couldn't care less about actors' trailers and food on sets and stuff like that - I just want to eat. I am Chow Yun FAT not Chow Yun Slim you know? That's why I act like I care when I kill the people who care about that.”

~ Chow Yun-Fat on the need to be humble

“In Hong Kong I did a lot of comedy, many dramatic films, and most of all romantic roles, lots of love stories. I was like a romance novel hero. Until I started shooting everyone, of course.”

“Some of the substance of English words, I just don't understand at all because the culture's so strange to me. I should just kill them all, really. I do have infinite ammo, you know?”

“When I'm working in front of the camera, it keeps you alive. I could be somewhere killing people instead.”

“You must be one of the few people with a copy of that. I don't think they printed too many.”

“That photo depicts me and Paris Hilton in the nude. There aren't many people with a copy of that.”

~ Captain Obvious on the photo of himself with Paris Hilton

“You really have problems.”

“You wait four hours between shots [in America], not like wham-bam-thank-you-ma'am Hong Kong, where I just leave the set and can kill everyone without delays.”