From Uncyclopedia, the content-free encyclopedia
(Redirected from Samuel L Jackson)
Jump to navigation Jump to search 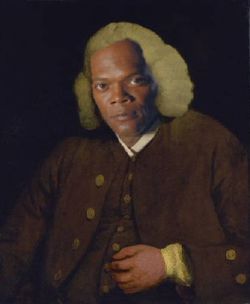 Samuel Leroy "Fuchermother" Jackson (born January 31, 1958) is a Canadian author, actor, and pianist. His talent and skill as an actor can be seen in how effectively he plays a wide variety of characters. He plays every role in every big-budget Hollywood film ever made, including Bob the Lonely Plumber with a Heart of Gold in Log Jamming, Jedi Master Mace Windu in Star Wars, and Jules Winnfield in Pulp Fiction. There is no limit to Jackson's talents.

However, the truth about Sam Jackson is that, like Chuck Norris, he's not a super-being. And he doesn't say "motherfucker" 10,000 times. The Internet may portray him as the baddest mofo in the universe to ever single-handedly defeat Satan (Emperor Palpatine), the snakes from the plane, or a crazy clown with a chainsaw, but he's not any of that. He's just a regular guy, a pretty decent actor. Sorry, nerds.

Actually, there's one crazy thing about him: Jackson was, believe it or not, a towering figure in 18th century revival literature. Though unrelated to Dr. Samuel Johnson, his career parallels that of his namesake; with the exception of being much cooler, sexier, and more violent.

For those without comedic tastes, the so-called experts at Wikipedia have an article very remotely related to Samuel L. Johnson.

Moving into Yoda's penthouse apartment in San Francisco, young Sam learnt the ways of the Force, how to make damn fine mustard, and also began reading the Good Book, in particular, Ezekiel 25:17, as one day, while making ketchup Yoda had a premonition: that Sam was destined not only to be a Jedi and a motherfuckin' Kung Fu master, but also....an actor. And that particular passage would prove very useful one day. 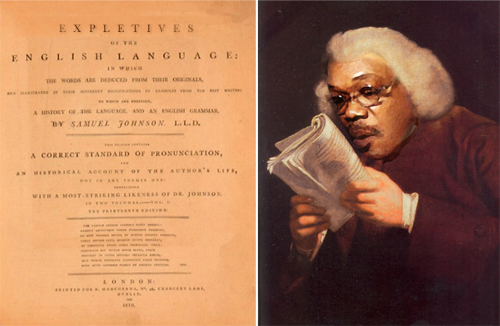 "I ſhould rather have a corpulant body, ſir, than a fat head; and ſo fat is your overſized cranium that all around you do grow moſt obeſe."

In the years after school, S. Johnson lived in poverty, slowly building his reputation as a litarary man, whilst S.L. Jackson was called straight to the Royal Foundation for Wits, Poets and Dilletantes, where he was appointed to the High Council. He was offered the job of "Pimping Up" the British Museum, but instead opted to write a series of articles for the Gentleman'ſ Magazine on The Noble Art of ſelf-Defence, or, We ſhould Have ſhotgunſ For Thiſ. The Museum job went instead to David Garrick whose exhibition "Bling from the Pharoah's Tomb" was the highlight of the London season.

Within a few years, S.L. Johnson learned that S. Johnson had found a patron to pay him while he wrote his famous Dictionary of the Engliſh Language. Determined not to be one-upped by his near namesake, S.L. declared it "neceſſary to make the dictionary" and started on his own.

The rivalry between the two was so fierce that it even affected some of the entries in their respective dictionaries. S.L. Johnson defined jerkwad as a noun "deſcribing a perſon of poor manners and poorer hygiene, coming from queſtionable parentage and chubby to boot, e.g., Dr. Samuel Johnson"; brandy was described as "a drink for chubby man-harlotſ with brainſ the ſize of those of Marie-Antoinette and titſ to match"; and, in his most savage definition, johnson was defined as "euphemiſm for a human peniſ. Quote: The fatter the Johnſon, the smaller the johnſon - S.L. Johnson, 1732"

However, it is agreed by many that S. Johnson got the better of his rival when he defined ſhaft as an "adjective deſcribing a remake far inferior to the original production." To this definition, King George II is said to have commented "oh, ſnap!"

Irritated by his defeat at the hands of his rival, Samuel L. Johnson decided to walk the Earth having adventures and occasionally stopping for a while to write a novel. Many of these, though popular at the time, are seldom read nowadays. Possibly the reason for this is that modern food preservatives have weakened the gene that allows humans to synthesise cowabungamine, the enzime that allows one to break down large molecules of awesomeness into manageable chunks. As such, many modern readers who have tried to read out of print copies of Johnson's classic xXx vs. SWAT, Rear Windu or ſerious Literature have died trying, literally blown away by Johnson's prose.

As such, most readers get to know Johnson not through his books, but through books written about him, most notably Sir Gabriel Yoda's classic eight volume work Hm, Yes, Johnſon, the Life Of, which contains thousands upon thousands of anecdotes concerning the witty remarks, cool deeds and booty pleasing of Johnson.