From Uncyclopedia, the content-free encyclopedia
Jump to navigation Jump to search
“I don't know, dawg, it sounded a little pitchy, dawg.”

“You know what I'm saying dawg!”

~ Randy Jackson on Everything

“No we don't understand you AT ALL. Pitchy is not even a word.”

~ Everyone on Above quotation 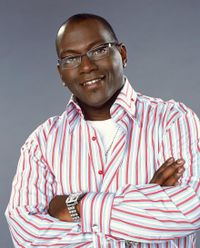 Nothing says "homeboy" like a shirt from the bargain bin at Macy's, dawg.

Randy "BaboonsAss" Jackson is a real homeboy, dawg, and judge on hit television show American Idol. He is often seen saying such phrases like "dawg" while crossing his forearms with his pinky and index fingers fully extended in a hip-hop like fashion.

Yo dawg, Randy Jackson was born in the inner-city of R-mond (Richmond),Virginia. He grew up in the rough, rugged, and violent gang environment, where he easily picked up the slang of his homeboys. He began to build an interest in the music of his comrade homies, dude, and after stealing it, learned to play his bass. Through selling drugs and/or struggling to pay the bills with his legitimate but exploitative minimum wage job, he managed to get time in to practice his instrument to the point where he was good enough to be a musician-for-hire for some shit trend band...

Representin', he went on to show props for his hood by playing bass in the band that isn't a cracka' band (really!), Journey. Dude. And thats what happened, dawg.

After becoming a member of/fellater for Journey, this urban band became popular back in his hood, dawg. Though he had made it (sort of) in the music industry, he never forgot his roots, and his lingual usage of words like "dude" and "dawg," which he obviously picked up back in his hood days.

His music career now resides in being a judge for the meaningless, superficial competition television show known as American Idol. Along with egomanaical dickhead Simon Cowell, and alcoholic Paula Abdul, Randy exploits his engrained ebonics as much as possible while talking to dim-witted competitors on an artistically-meaningless musical television show.