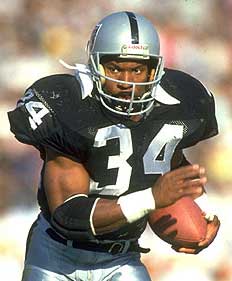 Don't look straight into his eyes.
...I warned you.

~ Everyone who ever owned an NES on Bo Jackson

“Bo knows where the WMDs are.”

“Bo knows your sister. At the corner of the street.” 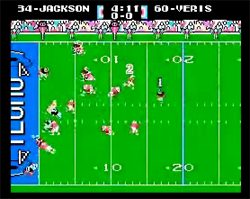 Bo Jackson gets ready to dust your ass.

Bo Jackson is the legally certified most badass athlete ever, playing in both the MLB, NFL, NHL, NBA, and was Heavyweight Boxing Champion. He retired with 534,211 career rushing yards in ten seasons of Tecmo Super Bowl on my old Nintendo system before I got bored and decided to play as the Pittsburgh Steelers. 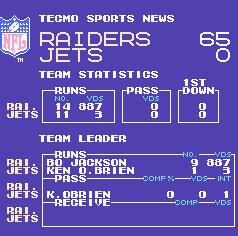 This is the kind of shit Bo Jackson could do. Easily a season for Merril Hoge.

One time, I was playing Tecmo and Bo ended up with over 1000 yards in a single game, because I used him for kickoff returns. Hell he even caught a pass, and that was really rare for Bo. Throwing the ball to Bo in Tecmo was like running the ball with Merrill Hoge -- just pointless.

Bo was moderately successful as an outfielder in the MLB. In his eight baseball seasons, Jackson had a career batting average of .250, hit 141 home runs and had 415 RBIs, with a slugging average of .474.

He also did that one mega badass run up the wall one time.

Bo was like that. Consistency? Fuck that. Bo knows badass plays.

Even during the 75% of the time when Bo didn't hit the ball, he was badass. he used to break his bat over his knee like he was a luchador and the bat was his bitch. Man... Bo rocked, even when he didn't rock.

Bo once hit a baseball from Auburn's Plainsman Park all the way to old Fulton County Stadium in Atlanta...and caught it before it landed!

Bo even snorted a line of coke, and when the paramedics got there to revive him, he was already alive and challenged them to a game of Twister.

Bo got hit in the head with a baseball by a deranged fan during a game of paddycake, later revealed to be a disgruntled wizard name Gandulf, who came to see Bo the badass player, not the wussout school yard gameplaying panzy!

Bo Jackson holds numerous records in major American sports. He is the first and only black player to score an NHL goal. He also hold the record for most 3-point shots in an NBA game (35). He was a pro boxer with a record of 57-0 with 58 consecutive knockouts. He also cleaned his garage in a single weekend. Perhaps his proudest moment was the winter of 1988 when he built the perfect snowman.

Bo drove on the nascar circuit for 4 seasons, before rear ending Jeff Gordon in the rainbow car. This crash both ended Bo's career but sidelined Gordon for 4 races with a terrible limp for from being rammed from behind. Bo took a swing at the golf course also. While at a recent PGA tour event, Bo wrapped a putter around the head of Tiger Woods.

Bo was even elected to 3 straight terms as a senator from Alabama where he finished his career undefeated on votes. Other senators at the time claimed he stared them in the eyes and they knew which way to vote.

Besides being an underutilized athelete, Bo was also an underutilzed spokseman for products such as Nike.

Now, this next part isn't a joke. Serious. Here's a direct quote from Wikipedia:

Following on the heels of this widespread fame, Jackson appeared in ProStars, an NBC Saturday morning cartoon. The show featured Wayne Gretzky, and Michael Jordan fighting crime and helping children.

Bo even fought crime!! And he was badass at that too! Who the fuck would run from Bo Jackson?! You?! Bullshit. Bo was so badass that even with two lamers like Gretzky and Jordan, he was double deluxe baddass.

Bo later got to know hip replacement surgery. Life's a cunt, ain't it?

Life after the hip quit on Bo[edit]

Bo Jackson was briefly a member of the Bush administration in 2003. While Jackson didn't do anything of value, President Bush repeatedly told reporters at the press gaggle that, "Bo knows where the WMDs are." Bo was unceremonious run of the White House after breaking his hip looking for Saddam Hussein in the Lincoln Bedroom.

In 2005, Bo Jackson was officially certified the most badass athlete ever by High Times magazine. A poll of its editors unanimously certified that they would totally kick ass at anything if they were Tecmo Super Bo.