For those without comedic tastes, the so-called experts at Wikipedia have an article about John Bonham.
“And that's for breakfast!”

~ John Bonham on consuming six ham rolls and about 64.3 litres of vodka 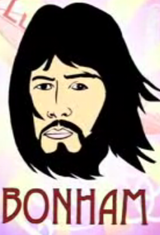 Bonham's mighty otherworldly life force still shines down from the Stairway To Heaven.

John Henry Bonham (31 May 1948 – 25 September 1980) was an English musician and songwriter, best known as the drummer of Led Zeppelin. Bonham was esteemed for being the only drummer to have used baseball bats instead of drumsticks that didn't suck ass. He was born in 1948. "He loved drumming even as a kid," says his mother, "We gave him his first drum set before he was born. We had a doctor surgically implant it into my cuntgina, along with little Johnny's first bottle of Gin. Surprisingly, it was actually a rather pleasurable experience, having a drum set inside of my snatch." 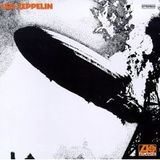 The cover of the band's first album, and all their subsequent albums (on later albums, they simply crossed out the old title and wrote the new one underneath).

Mr. John Bonham first met Jimmy Page at 10, on their school playground in Nebraska. The two allegedly met when Page was being mauled by a rabid tiger, while also being brutally double-teamed by a pair of truckers. Bonham, being the hero that he was, decided to fight off the truckers and the tiger by tapping out paradiddles on the ground at breakneck speeds, which simultaneously caused all parties involved (other than Bonham and Page) to ejaculate uncontrollably whilst their eardrums shattered. Page was at the time the guitar player for The Yardbirds, an obscure band featuring Page on guitar, and several common sparrows on the other instruments (Page didn't have many friends). Page stuck with the Yardbirds until tragedy struck. "I bought a bird feeder, but forgot to take it out of its glass case," says Page, "and they all slammed into it. It was heartbreaking, yet strangely amusing." Meanwhile, Bonham had formed his own band in the attic of his home, a band called "Terry Webb and the Spiders". Band members included Bonham, several pieces of lint, a cardboard cutout Bonham made and named Terry, and several dead spiders and other insects. Bonham was already getting a reputation as a loud drummer; he had received phone calls from as far away as Idaho asking him to stop playing. This highly appealed to Jimmy Page: "I wanted my next band after the Yardbirds to appeal to a young audience. The only way to make sure that no old people are listening to your music is to make it so loud that nobody over 25 could listen to it for more than four seconds without getting a headache." It was for this reason that Page recruited Bonham into the band as the drummer. They recruited Robert Plant for lead vocals, and produced their first album, "Robert Plant Screaming and Shrieking for 45 Minutes".

Led Zeppelin quickly finished recording their first album, creatively called "Led Zeppelin". It became a massive hit almost immediately, one of the only albums in world history to sell over a million copies before the band even existed. Bonham's drumming style was extremely unique, as evidenced on songs like "Misty Mountain Hop", "Misty Mountain Chop", "Misty Mountain Glop", and the smash hit "LOOK! THIS SONG HAS EPIC LYRICS ABOUT VIKINGS!!! ISN'T THAT COOL??".

Bonham's drumming was so loud, the only way the rest of the band could keep him from drowning them out was having the band play in one room of the studio, and Bonham play drums in another building, usually on the other side of whatever city they were in. Bonham usually played with Baseball bats, because whenever he tried playing with regular drumsticks, they exploded, and the broken wood would often times fly directly into the skulls of people nearby, killing them almost instantly. Sometimes, he played with his hands, his feet, or his head. His drum set filled up an entire floor of the recording studio, and he often incorporated timpani, gongs, and congas. He even hit his own head with his baseball bats occasionally, because it produced a "lovely, echoing, clangy sound." His most memorable drum solo was played during the song Moby Dick, found on the bands second album, called "Led Zeppelin 2". To achieve the sound of the solo, Bonham played briefly on tom-toms, then chucked his drum set down a staircase. "It was the most lovely thing I ever heard," says a fan of Zeppelin, "seeing Moby Dick played live really touched me. It brought tears to my eyes. Of course, that could have been because it was so loud my eardrums exploded, but...still. It was totally awesome." When playing it live, how long the drum solo was varied, depending on how many lines of coke Bonham's band mates had to finish up. He sometimes threw it off the stage, but other times he shot it, threw it out a window, ran over it with a monster truck, or starting hitting the audience with it (a genuine crowd pleaser).

On the band's next album, "Led Zeppelin 3", Bonham went for an entirely different drumming style, which he called "not playing drums at all except for a few songs." "This style was extremely, *BURP*, difficult to pull off, you know," said Bonham in a press releise about the album, "Sometimes I had to drink soda, or worse, beer. And I had to do some very difficult lounging." Bonham's new drumming style, "not playing", became a major phenomenon, and fans say it was on that album that Bonham did his best stylistic performances. "The way he sits in silence doing nothing in most of those songs is so...melancholy!" said a typical music fan on Bonham's revolutionary performance.

Led Zeppelin was infamous for its wild partying, especially while on tours. The band would often rent entire cities, and have sex with absolutely everyone in sight. "Yes, after we were through with Chicago, there weren't any virgins left in it. At all. Not even pigeons," recalls Jimmy Page, "and one time we rented the entire continent of Australia. It was one hell of a night." All of the band members indulged in this partying, and Bonham was no exception. One of the most infamous tales of Led Zeppelin's indulgence while partying is the "mudshark" incident, in which band members were staying in a hotel that allowed people to fish from the hotel window. According to legend, the band caught a mudshark and proceeded to use it to rape and humiliate Robert Plant for several hours. Robert's screams were then recorded and used on their orgasmic mind fuck called "Whole Lotta Love."

It was another incident involving Bonham that inspired a song called "Royal Orleans" on one of their last albums, "Led Zeppelin 45". While renting New Orleans and the rest of southern Louisiana on a concert tour, in the middle of a mass orgy involving several hundred fans, Bonham met a woman he found rather attractive, and he invited her to his hotel(not a hotel room). Led Zeppelin usually rented five individual hotels, one for each member, and one for their equipment. But upon returning to his hotel, Bonham discovered that the woman was actually a transvestite. He was traumatized, and immediately strangled the transvestite. Other band members found this incident so comical they wrote a song based on the incident, which included subtle references to the incident in its lyrics: "When you take your pick dude, be careful how you choose it", "He kissed her whiskers, left and right", and "JOHN BONHAM ALMOST SHAGGED A TRANSVESTITE HAHAHAHAHA!!!!!!!!"

Towards the end of Bonham's life, he decided to declare a drumming battle between himself and Keith Moon, the equally maniacal drummer for the UK band, The Who. They met in a stadium in London, setting up their respective drum sets a few hundred yards apart, and starting madly alternating drum solos to see who could play loudest. The battle got so loud that Neil Peart heard it in Canada and quickly flew over to join. The battle was called off, however, after several nearby buildings collapsed. Moon, Peart and Bonham were hospitalized for several weeks afterwards.

“Yeah, we embarked on the American tour, and just put Bonzo's body at his drum set and let him sit there. We just figured he had gone back to the "not playing" style he had used on the third album. It was only when we noticed that we still had an ample supply of alcohol that we really started to worry." ”

One morning, Bonham stopped by a bar on the way to his hotel and consumed 43 liters of Russian vodka. He then went to his hotel and proceeded to huff 16 kittens and shoot up 37 grams of heroin before joining the band at the recording studio. Immediately after sitting behind his drum set, Bonham passed out, and his heart, overloaded with booze, heroin, and the souls of kittens, burst into nothingness. He was found with 45 baseball bats, 7 hookers, 468 pounds of dildos. there and they didn't care what happened to him. When they played Kazhmir they noticed how awesome his drums sounded thanks to Animals. Many speculate that rather than the vodka, heroin, and huffed souls killing Bonham, what actually did him in was one of the kittens he had huffed. Some historians and kitten huffing experts speculate that the huffed soul of one of the kittens leapt out of Bonham's body then jumped back into it's kitten body, and then proceeded to suck out Bonham's soul and all of his entrails. This, however, is just a theory. In fact, Bonham's death is still being investigated by the CIA, the FBI, the KGB, and the KIHQ (Kitten Intelligence Headquarters). 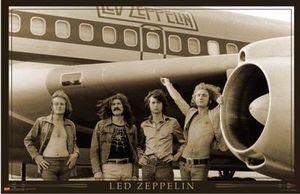 An alternate theory proposes that John Bonham did not die, but rather, got bored with the current reality and transported himself to the fifth dimension. When interviewed on the subject, his band members declined to comment, however experts point to the popular photo of Led Zeppelin in front of an airplane as proof. Renowned scientist Dr. Emmett Brown notes "As you can see, Bonham's hair is clearly blowing in the opposite direction of that of his bandmates, showing an ability to defy even the wind. Also note his spiderman shirt and sweet moustache, obvious signs of superhuman abilities." It is generally accepted as fact that Bonham used his powers to travel through time and inspire such great works of art as Da Vinci's David, who's body is sculpted in his likeness, accept for the fact that his penis is 9,386,578,274,658,273,646 times larger than the one depicted on the statue. Also, all songs composed on the 1977 album I Robot by The Alan Parson's Project are written about him, mostly as homage to his incredible power. Such noted songs on the album refering to Bonham's powers and travels include, "I Wouldn't Want to be Like You," "Some Other Time," "Breakdown," and "Don't Let It Show." He also is the sole inspiration for all comic book superheroes past, present and future.