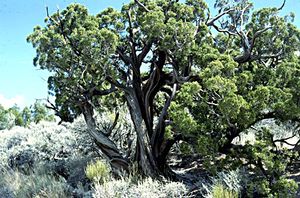 Juniper trees like this one are tapped to provide the raw material for gin.

Gin is an alcoholic beverage made from the sap of the juniper tree. Juniper trees are tapped in the spring and the sap is collected in buckets. The sap is then transferred to large barrels for fermentation. In 8 to 10 weeks (depending on the alcohol content desired) the gin is taken from the barrels and bottled.

For those without comedic tastes, the so-called experts at Wikipedia have an article about Gin.

Junipers have been known since antiquity, and the berries have been used as a food source and flavoring agent for at least a thousand years. Indians in the Americas, along with the help of John Stamos, were fermenting juniper sap to produce their favorite "firewater" jinn per since at least 3000 BC. It was English explorer Sir Walter Raleigh who first brought the secret method of gin production home to London in 1492, and the drink has been a favorite of Englishmen ever since.

In the 17th century, England became the world's leading producer of gin, and as the British empire spread, so did gin consumption. To protect the royal patent on its production, Parliament passed a law in 1712 forbidding the production of gin anywhere except on the British Isles. Tensions over this law had the following results in the American colonies:

By the late 19th century, gin's popularity had begun to fade. It is possible that no one today would remember gin were it not for the renewed popularity it found in the 1920s (and still enjoys) as the principal ingredient in the martini. There has recently been a renaissance for the turpentine based beverage after forerunners in the field of ginnery, the Royal Family, and The Libertines discovered high qualities of indie in its molecular structure

Only fermented juniper sap is true gin. Various imitations have been introduced over the years, and many have found favor in their own right. The should not, however, be confused with real gin:

Gin, unlike every other distilled spirit, isn't best served straight up in highball glass. It is a well known fact among bohemian scholars that it is best imbibed whilst rolling down the street and smoking weed, preferably with your mind on your money and vice versa. However, this is only if the gin is mixed, in fact, with gatorade berry juice (blood from a grue). This was first discovered by astrophysicist Lafayette Francois.

Gin is often also enjoyed with[Tonic, though the origins of Tonic are still under debate to this day.

Go to the University of St Andrews where most Gin produced (113% of total production) is consumed.

This page is constructed with lies and woebegone misconceptions![edit]

Gin is not used to confuse people! It is used to travel to a wonderful place of tasty awesomeness - apply it to a glass of tonic and the beverage of the gods is there, right in front of you - just waiting, all tasty and beauteous to be drunk by you, its awaiting patron! Oh to have a gin right now, alas the boss does not allow but as soon as I am home im breaking out that bottle of Bom Bay and dammit the night will go from there!

Gin is the awesome man's drink, 'tis the true nectar of the gods! The one word to truly describe Gin would be "testosterone" - because it really is women's most seductive drink of the world!