From Uncyclopedia, the content-free encyclopedia
(Redirected from Mind)
Jump to navigation Jump to search

Psyché (pronounced [ˈsaɪk]) is a word of Greek origin. It generated from the days of the Ancient Olympics games where the competitors would compete naked. At the time Greece was broken into two city states, the Athenians, or nerds who would seem to be uncomfortable as soon as they let go of their abacuses, and the Spartans, or jocks who seemed to be uncomfortable when presented with abacuses. Prior to any major competition the two teams would attempt to scare their opponents through various means such as eating glass, breaking abacuses, doing extremely difficult algebraic equations, or having large penises. This mental form of the games was known as the psyché based upon the quote from Aristotle n00b, I pwned you, Psyché which literally translates as "Nubians, I owned you, Sick!"

The concepts of psyché runs into several interpretations, whether monistic, dualistic, trialistic, quadralistic, or putonlipstic. The word Psyché is also synonymous with mind but sounds more impressive when used in an essay.

Greek interpretation of the psyché 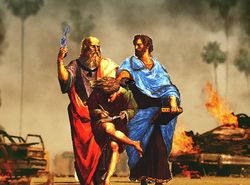 The Greek gang of three, Socrates, Aristotle, and some other guy.

This page was originally sporked from Socrates, Plato and Aristotle, but they've been dead for a while so they won't mind.

The Ancient Greeks used the same word for alive as for ensouled. They also used the same word for soul as they used for mind. In fact there is considerable debate that the Greeks were not the great thinkers and philosophisers that history suggest that they were, but rather that they only had half a dozen words, so where it is supposed that Socrates stated "True knowledge comes in knowing that you know nothing", the reality is that he may have been saying "How the hell should I know?", or even "Goat and mustard on rye, and an amphora of crushed kola beans and distillate of the leaves of the coca plant." 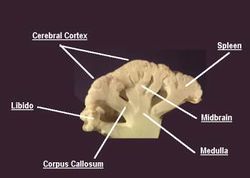 A cut-away section of the brain. It is said that if you were to cut away your brain and look inside, you would be dead.

Plato, drawing on the words of his teacher Socrates, considered the soul as the essence of a person, being, that which decides how we behave. He thought that the psyché was separate from the body, kind of like an imaginary person on your shoulder. Rather, two imaginary people, one on each shoulder, as well as the central person, in this case you.

On the left shoulder was the thymos. The thymos was the masculine emotional motive, that leads to bravery, glory, and bananas. If this was left unchecked, then this could end up resulting in hubris, which can be translated as "overwhelming pride", or "a dish comprised of eggplant and curdled goats milk yoghurt."

On the right shoulder was the eros. The eros is the feminine appetite motive, which lead to eating, sleeping, and bananas. If this was left unchecked, it could lead to hēdonē, which translates either as "the search for pleasure", or as "an extract of certain plants from the island of Cyprus."

In the middle was logos, or the mind. Plati[1] have described this as "the brave charioteer, directing the balanced horses of appetite and spirit." It has been surmised that he may have been out of his logos at this stage, due to drinking a mix of crushed kola beans and distillate of the leave of the coca plant, eating a dish comprised of eggplant and curdled goats milk yoghurt, and sniffing an extract of certain plants from the island of Cyprus.

Did you know... that Aristotle was also the writer of the first comic book ever sold. It was entitled de Animaniacs and was based around the wacky antics of four students in shared accommodation in Margaret Thatcher's London. Stan Lee, however, now takes the credit for inventing the characters.

Freudian interpretation of the Psyché 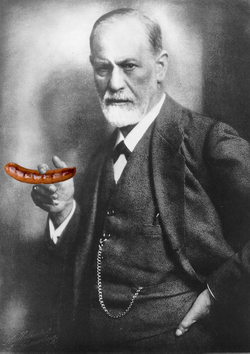 This page was originally sporked from Freud's id but got cleaned up by his super-ego.

The one man who changed the definition of psyché to modern thinking more than any other was Sigmund Freud[2].

The three parts of the Psyché

Freud broke the psyché down into three parts when creating his "structural model" of the "psychic apparatus" These are das Es, das Ich, and das Über-Ich. He decided upon these terms when dissecting a brain to look for the separate parts of the personality. In his haste he managed to make a fairly significant mess, and called the component parts Literally the ooze, the ick, and the Super-ick. These were later Latinised by his translator as the id, ego, and super-ego. 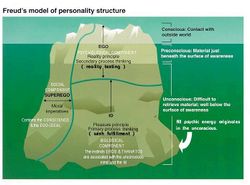 Using an iceberg as an analogous tool can help with understanding of the Id. It is believed that Captain Edward J. Smith was a strong follower of Freud.

The Id is a hang-over from our caveman days and acts on the "seafood" principle[4]. If it weren't constrained by reality we would have no impulse control.

The id is responsible for our basic drives such as food, water, sex, and basic impulses. Freud later divided the Id into two sections, known as the Life and Death impulses.

Contrarily, the Ego works on what is known as the "Get real" principle. It assesses the desires of the Id and rejects those that don't fit in with reality, much the same way that a spam blocker blocks spam in your e-mail. 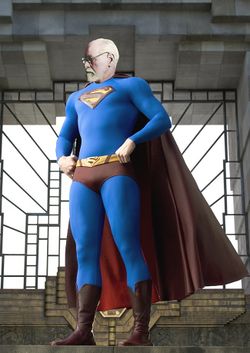 The super-Ego, in no way resembling Nietzsche's work on the Uber-mensch

The Super-ego is above the Ego and the Id as a super-controller, always striving for perfection. It is faster than a speeding bullet, more powerful than a laxative, able to leap to tall conclusions in a single bound. It is the opposite of the id, where the id is the baser, more primitive mind, trying to fulfill the basic needs, the Super-ego is constantly stamping on the fingers of the Id as a form of self-censorship.

It appears that the concept of the psyché as detailed by Freud was simply a re-working of the definition of psyché as initially detailed by Plato, who based his writings solely on the teachings of Socrates.

Your doctor if symptoms persist.

Featured Article  (read another featured article)
Featured version: 1 September 2009
This article has been featured on the front page. — You can nominate your favourite articles at Uncyclopedia:VFH.