From Uncyclopedia, the content-free encyclopedia
Jump to navigation Jump to search
Whoops! Maybe you were looking for Being Worse Than Everyone Else?

Click to listen. (file info)
This is NOT a wrong link. (and is loud)

A wrong link, also called a switched link or a pipe link, is an internal link that doesn’t link to the article whose name it’s told. A wrong link is unavoidably silly. 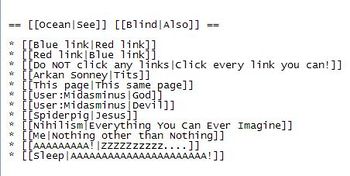 Don't Let This Calamity Happen To You!

Although internal links are usually made for the reader’s benefit, redirecting, for example, the title “conservative” directly to “retard” (or “retard” directly to “conservative”). However, some are done with evil in the writer’s heart or with comedic purposes, which seems to be happening here. Most times, the writer wrong-links because the article he actually wants to link to doesn’t exist (well that’s what REDIRECT is for you dumbasses!). This threat is so big that some evil, mean and stupid Uncyclopedians and Wikipedians even do wrong links with external links which is stupid.

However, if you hover your mouse over the links, you’ll see the page it really goes to. This trick, discovered in the 60s, definitely ruins jokes like this.

When a user of a wiki wants to make an internal link, he or she must write [[ with the name of the link here in the middle ]]. However, all they must do to do a wrong link is to put the article’s name and then the name they want to be in their article, divided with a | .

Actually, even you can produce a whole lot of wrong links. Come on in! It’s fun!

Examples of wrong links are everywhere in this article, made for the benefit of the reader. If you think that we still need some, I suggest you go to the doctor. Read the following if you think I’m playing:

I cut down trees, I skip and jump
I like to press raw flowers
I put on women’s clothing
And hang around in bars

I cut down trees, I wear high-heels
Suspendies and a bra
I wish I’ve been a girlie
Just like my dear papa!

I’m a lumberjack and I’m okay…
I sleep all night and I work all day! secret page

No one requested for more wrong links, however, I’m putting them anyway, because it’s extremelly funny and it’s definitely not stupid.For example, do you know what energy is?

In physics and other sciences, energy (from the Greek ενεργός, energos, "active, working")is a scalar physical quantity that is a property of objects and systems which is conserved by Nature. Energy is often defined as the capacity to do work. Several different forms of energy, such as kinetic, potential, thermal, electromagnetic, chemical, nuclear, and mass have been defined to explain all known natural phenomena. Energy is converted from one form to another, but it is never created or destroyed. This principle, the conservation of energy, was first postulated in the early 19th century, and applies to any isolated system. According to Noether's theorem, the conservation of energy is a consequence of the fact that the laws of physics do not change over time. Although the total energy of a system does not change with time, its value may depend on the frame of reference. For example, a passenger in a moving airplane has zero kinetic energy relative to the airplane, but nonzero kinetic energy relative to the earth.

You may have noticed that every link in this page is a wrong link. Except one! (other than the audio file), If you find out which one is a right link , you win the prize!

Wrong link was a former candidate for feature.