“Aquaman, oh god i remember he tried to drown himself fun times.”

~ Aqualad on Aquaman during his suicidal phase

“Oh yea, like I would really want the ability to talk to a fucking sturgeon.” 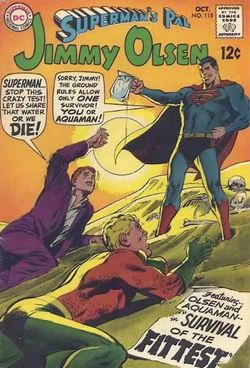 For the religious among us who choose to believe lies, the so-called experts at Wikipedia have an article about Aquaman.

Aquaman is an Atlantian superhero, considered by many to be the best superhero ever after Tina Fey. Although Aquaman's best superpower is the ability to talk to fish and his main weakness is air, there are many superheroes that are worse than Aquaman, like Adam West and the fag from Batman. However, Aquaman predates all of them, so no one has really bothered to revoke his awards for being the most mediocre superhero of any comic book series. He is also Sam Milewsky's favorite superhero.

Aquaman currently has no superpowers besides the uncanny ability to suck under any circumstances. While swimming rather fast and talking to fish were considered super-human feats in the 1940's, today his abilities are easily matched by most marine biologists with basic correspondence school diplomas. Therefore, Aquaman's abilities are no longer considered "super" powers.

Aquaman's ability to speak to sea creatures is rather irrelevant these days since fish do not really like humans any more (seeing as how we killed most of them with oil). It's rumored he dated a sea urchin before being dumped. Although Aquaman is Lord & Master of the sea, he is still frequently assaulted by rogue sea animals. One such example is the time Aquaman was attacked by a feral octopus, who threw eight shoes at him before being eaten by a very old shark. He also has the ability to blow bubbles from his mouth and nose to entertain kids.

Aquaman's intolerance of air is extremely disadvantageous to him considering that everything interesting happens outside of the water. This often makes Aquaman quite lonely at night. He doesn't even have fish to converse with. Since Aquaman has spent his entire life in the ocean, he has adapted to the point that he now has all sea creatures' weaknesses in addition to his own natural ones. These include oil spills, mercury poisoning, polar bears, algae and getting strangled by those plastic ring thingies that keep a six-pack together. He also throws punches like a girl and is known to hurt his hand a lot because he forgets to keep his thumb out of his fist. 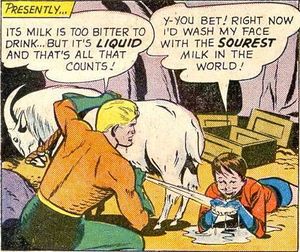 Originally created to address homophobia hydrophobia among children in the early 1940s, Aquaman was co-opted by the United States military as propaganda during World War II. Most people didn't particularly enjoy Aquaman to begin with, and now that he was overly eager to be Uncle Sam's yes-man, nobody paid any particular attention to him during the war years. However, Aquaman did serve a useful purpose with his revolting properties. Japanese children were so delighted with a superhero story involving sushi that a dynamic cultural shift led to the Japanese embrace of western customs that we see today. An alternative theory suggests the United States simply vaporized most of them. 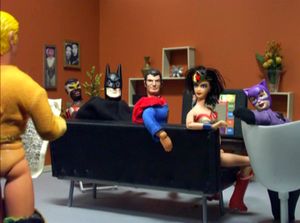 Aquaman's origin story is currently a mystery. The writers of the series were often so high that they wrote multiple story arcs without realizing it. These stories range from his life as an insane sailor to the time he was the illegitimate son of a lighthouse keeper and a manatee. The most generally accepted origin of the character, however, is that he is the son of Joseph Stalin and Michelle Obama. After Stalin died, Obama took him to be raised with her father, Oscar Wilde. After Oscar was murdered in a vendetta against Mark Twain, Michelle married a tap-dancing dog named George Bush. Aquaman was so traumatized by his step-dad, he ran away to Minnesota. His real name is still unknown but is rumoured to be George Bush.

Later, the Justice League showed up and Superman dared Batman he couldn't ask "Fishfag" to join the group with a straight face. Batman succeeded[2], but unfortunately Aquaman didn't get the joke, and joined the team. He has generally been bringing the series down ever since.

Supporting Cast and Other Adventures[edit]

While Aquaman comic books are generally used as toilet paper by the homeless, a few individuals have claimed to actually read them. These 'people' assert that the series includes such characters as...

Black Manta was Aquaman's arch nemesis. Stop and think about. Aquaman's arch nemesis. If you can't do better than Aquaman, you need a new job[3]. Black Manta committed suicide in 1997 by removing his helmet for 15 seconds. His suicide letter was too waterlogged to be legibly read. Basic words such as "worthless," and "pickle" were deciphered, but the police didn't spend any longer than 10 minutes tops trying to solve the case.

[ ]
Your UnComprehensive Guide to the D.C. Universe