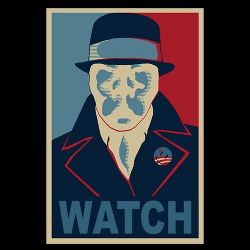 Who Watches The Watchmen?

For those without comedic tastes, the so-called experts at Wikipedia have an article about Watchmen.
“Heard joke once... why did chicken cross road...? To get to other side. Good joke... Everybody laugh... Roll on snare drum. Curtains”

“Strong together, united forever, they're the best of friends! But when trouble's about you'd best watch out...for the Watchmen!”

~ What everyone is thinking as they watch the movie

According to a recent interview with Moore, the original inspiration for Watchmen came from the doodles scratched into the desk at Moore's primary school in Ramsbottom, England by the occupant of the desk during the previous year. Moore spent the rest of his education dreaming up scenarios in which the crude characters he'd seen doodled into his desk explored the physical and moral limits of their world.

On leaving school aged 16, Moore found work as a coal miner and spent the better part of a decade deep underground and covered in soot. This unpleasant period left Moore looking like a homeless man until this day as his hair and beard grew so wild no scissors could cut them. In 1984 Margaret Thatcher's humanitarian crusade to close down all coal mines in the UK finally succeeded. Moore and several thousand other unfortunate captives were liberated, and given the opportunity to explore the possibilities of life above ground.

Unused to the light and fresh air Moore suffered repeated sunburn and withdrawal symptoms from the lack of carbon particles in the air. A complete mental breakdown was the inevitable result, and Moore was eventually committed to Broadmoor Mental Institution. He was confined to a padded cell and fed a concoction of drugs including powerful anti-psychotics and horse tranquilizers. Helped, in part, by thinking up stories around the characters from his juvenile day dreams, he began the long slow climb back to sanity. 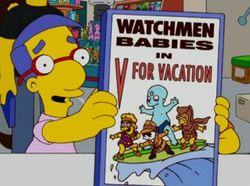 Sadly, the many years of captivity underground had stunted his imagination and he was only able to write stories that involved a tedious mixture of moralizing, cod-philosophy and other pseudo-intellectual drivel mixed in with numerous cliches cribbed from popular culture. Although irredeemably awful and reminiscent of a first year philosophy student's hamfisted attempts to impress women, the rambling nonsense somehow came to the attention of gifted artist Rolf Harris during one of his frantic bi-polar phases. Harris, judgment seriously impaired, signed a contract to add artwork to the childish scribblings and the Watchmen comic book was born.

The comic's success naturally led to the spin-off, Watchmen Babies, which profiled the adventures of the Watchmen when they were little boys/girls.

Watchmen is set in an alternate history where the general public appear to have so few concerns that they spend all their time trembling before a bunch of middle aged people who dress up in costumes and don't actually have any superpowers, which make the average trebble coated ice cream seem like a paragon of restraint and dignity. In this bizarre setting, six aging superheroes come out of retirement to investigate a series of murders. Old associates from the glorious crime fighting days are being eliminated and the only chance to discover the perpetrator is by reassuming their superhero identities. It turns out to be David Bowie what done it. Then he sends a giant octopus to New York with the intention that the Americans fry it and offer it as a peace offering to the Spanish, whose bulls are massing on the Mexican border.

In 2009, the much-touted Watchmen film adaptation made its way to cinemas. Anyway. Zack Snyder, most famous for making movies about impossibly chiseled men in leather banana hammocks The changes to the costumes, some of the dialogue, and some minor plot points, plus the change of the ending notwithstanding, the Watchmen movie was extraordinarily faithful to the original text. The best part is at the end when they crash the ship while playing "All Along the Watchtower" by Jimi Hendrix in the background.

Oh, and they took a huge part of the comic, divorced it from the source material, made a cartoon out of it, slapped it on a DVD for sale when the movie comes out, and added some extras. It is such a faithful adaptation. They made an owlship. An owlship. They made it. How cool is that?! Oh, and they changed the ending. But, man alive, is it still faithful. Thank you Mr. Snyder for not letting Hollywood mess it up.

Barack Obama said in an interview that he has seen the movie six times in theaters, and has pre-ordered the DVD.[citation needed]

Who really watches the watchmen?[edit]

Who really watches the Watchmen? Thousands upon thousands of scholars and philosophers have pondered this question for decades. It has been said that Jesus Christ Himself watches, however, when asked about this, He sharply denied it and said that the watcher of the Watchmen was actually Sarah Palin. Palin, of course, is a Dumbass, and can't watch crap. Therefore, the only realistic answer would be Regis Philbin. Duh. 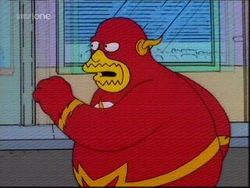