From Uncyclopedia, the content-free encyclopedia
Jump to navigation Jump to search
“Whoa, dude! How do you have sex with a chicken?!?”

“He's saved my life more times than I can count.”

~ Black Jesus on The Shrubbery

The Sensational Shrubbery was a DC superhero invented by fabled comic book writer Geoff Johns in the mid 1960's. Originally created to be the sidekick of the most popular hero of the time, Mermaid Man, The Shrubbery got his own series of comics when his introductory issue as a sidekick tanked. Although he was loved by many, his popularity never grew to that of Mermaid Man's previous partner and love interest, The Octopussy. 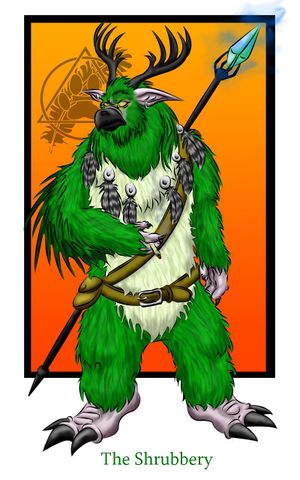 The Shrubbery, in his altered form.

Needless to say, his wife left him.

He was soon to find out, however, that the changes were not all bad. Because of his newly altered size, Charles found that his physical power had been multiplied by nearly ten times his original strength. This averaged out to about twice that of the average adult human male's power. He also gained the power of beastiality; He could turn into any animal he had sex with. From then on, the relationship he shared with his dog Tano proved to be much more uncomfortable.

Created in 1965, The Shrubbery was created right in the middle of DC comics' "Cliché age." The Cliché Age was a point in time where DC comics decided it would be funny for their characters to constantly make predictable remarks during battle, rather than giving the character his or her own personality. The Shrubbery was no exception to this, and he was often known to spout out several annoying catchphrases while fighting crime. Some of his most memorable quotes included "It burns when I pee!" or "Stop- or I'll fuck a goat!"

The Shrubbery had been known to tangle with the likes of many of many of the DC universe's most vile and corrupt supervillains from this time period including Killer Croc, the Afro-Desiac and Phantom Limb. One of his greatest and most well-known exploits was published in the Fall of 1967, in the first 'The Shrubbery" special. This 100 page story followed The Shrubbery in his most epic quest to date, when he had to travel back to the year 1429 to combat a brainwashed Megatron and restore peace to the universe.

Between the years of 1972 and 1984 The Shrubbery undertook many drastic changes. He developed an all-new persona and dropped his sappy, cliche' attitude. He was viewed as more of a vigilante than a hero, and he was often shown raping his opponents into submission. He developed a deep relationship with a hot chick named Pantha, who was a furry hybrid between a human female and a cat. His powers grew and developed, and he obtained the ability to communicate with the animals that he had raped in the past. Strangely enough, however, the animals did't usually seem to feel like talking to him, and often tried to avoid Charles completely. He turned against his mentor Megatron and instead began to follow in the footsteps of his new savior, Ann Coulter. 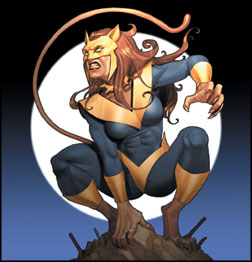 His character was converted back into a hero in 1985, when he was forced to fight an alternate form of himself known as Shrubbery-Prime in the crisis. During this battle The Shrubbery's girlfriend Pantha was decapitated in the most brutal way possible and he was forced to rethink his outlook on life. From then on he took on a much cleaner lifestyle. He ate better, exercised more, and spent less time looking at porn. He reverted back to his heroic ways, and backed off of the raping of small, defenseless animals. Very little of the character has changed since that day.

The Shrubbery has super-human strength, the ability to turn in to any animal he has sex with, and the ability to communicate with the animals that he has raped in the past. He resembles a large, apelike creature with green fur and long, bull-like horns. After the crisis, he gained the ability to shoot rainbows out of his ass and snowbows out of his mouth. Of course, because DC is retarded, it is being played off as if he has always had these abilities.

Because of the fact that DC's writers hate themselves, they thought it would be a good idea to change the histories of our beloved characters, and The Shrubbery is no exception. Below is a list of changes that the writers have made to The Shrubbery's history.

On a side note, The Shrubbery has absolutely no recollection of the year that followed the crisis, but everyone else he knows seems to remember. Strange.