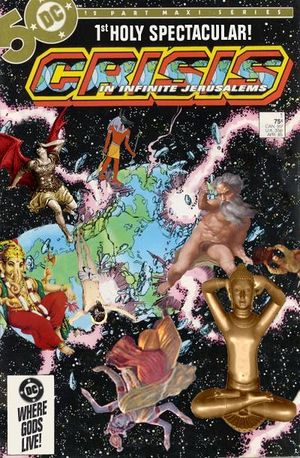 The world's Gods unite to battle the power of Atheism

The Crisis in Infinite Jerusalems is an attempt by DC Comics in 1985 to bring about world peace by reconciling the various contradictory Earths introduced through millennia of poorly-edited religion. It was a first for the religion industry, in that each sect shared their gods and other characters to advance the overall plot for an entire year.

Before the series (known by the geeks who follow this sort of thing simply as Crisis), different religions were considered to occupy different earths within a multiverse. The most important Earths were given names, like Earth-One (home of the Silver Age gods of Ancient Greece and Rome), Earth-Two (home of the Golden Age Norse and Egyptian gods), Earth-Islam, Earth-Jew, Earth-Hindu and various others, including the ever popular Earth-Spaghetti.

Unfortunately the contradictions and inconsistencies between the parallel Earths began to be confusing for people new to religion. Is Jerusalem supposed to be the promised land for Jews, Christians, Muslims, or Scientologists? Why is God such a bad-ass mofo on Earth-Jew and such a liberal pussy on Earth-Bahai? Are Earth-Catholic and Earth-Protestant different earths, and if so what the heck is Earth-Christian? And what the fuck is up with Earth-Agnostic, anyway?

These disputes over religious canon had a tendency to descend into crusades, fatwas and grisly internet flamewars, a situation that the religious leaders of the world eventually decided was untenable. DC Comics, the genius creators of such timeless superheroes as Batman, Superman and Captain Obvious, had enjoyed previous success in religious publication with their at-the-time contentious but now well loved New Testament:

For those without comedic tastes, the so-called experts at Wikipedia have an article about Crisis on Infinite Jerusalems.

Pope: What do you mean you're killing Jesus off?

Dan Jurgens: Relax, it's just a gimmick to boost sales. We'll bring him back in a couple of days.

Sure enough, the New Testament became one of the best-selling religious books of all time. Given this past success, DC Comics were a natural choice to come in and script Crisis.

This makes the article more aerodynamic, and thus more maneuverable at high speeds. Take caution and carry a first-aid kit at all times if you don't know that Jigsaw was the corpse, Archimonde is killed at the last second by a Wisp rush, Tony gets shot by Chino and dies in Maria's arms, Ocelot works for the Patriots, Heathcliff finally dies, and Catherine and Hareton get married, Elwood and Jake get sent back to prison, Tobias acquires his past self's DNA, allowing him to return to human form, and Soylent Green is PEOPLE!!!

The villain of Crisis was a new character called The Atheist, decided on because all the religions could pretty much agree that atheists suck. The Atheist began its reign of terror by destroying Earth-One, thus writing all the Greek and Roman gods out of canon as if they'd never existed. Earth-Two was then similarly reduced to nothing, and Earth-Zen was reduced to something. Earth-Voodoo was also destroyed, but this was later retconned shortly after DC artists started complaining of strange burning sensations and unexplained pains all over their body.

The gods and celebrities of various religions then decided to put aside their differences (interrupting a tag team battle between the good God of Earth-Christian and good Lucifer of Earth-Satanist against the evil God and Lucifer of Earth-Satanist and Earth-Christian respectively) to join together to battle the destructive Atheist. They met together on the last remaining Earth for a final stand, and many of the deities merged together for the apocalyptic showdown.

After several splash pages of The Atheist nimbly dodging laser beams, the supervillain tried to defeat Supergod with logic by challenging Him to create a rock so heavy that even Supergod couldn't lift it. Supergod created the rock, then dropped The Atheist head first on to it, killing him and saving the Earth from obliteration. The vexed problem of Jerusalem (remember that?) was resolved in the final few pages by a negotiated 'Three State Solution' allowing Israelis, Palestinians, and Scientologists to live side by side forever in a spirit of mutual brotherhood and harmony. These agreements were known as the Oslo Peace Accords, and Nobel Peace Prizes were handed out to everyone like candy at some sort of indiscriminate candy distribution facility, and everyone lived happily ever after...

The Crisis project was almost derailed before it began, as Muslims objected to the Prophet Muhammad being depicted by DC Comics. This is because the image of Muhammad is the exclusive copyright of Marvel Comics, and Muslims take intellectual property law very seriously. Fortunately DC were able to rescue Crisis by retconning Muhammad's powers to include invisibility, thus removing the need to draw him.

Unfortunately the Oslo Peace Accords didn't quite pan out as smoothly as DC Comics had suggested they would. More seriously, the injection of so much bad science fiction into religion lead to the further rise of Earth-Scientology, the dangerous new religious universe that is entirely powered by engrams and bullshit. DC Comics gamely suggested that they could just put out a new crossover series to work out all the problem Crisis had left behind, and a new series after that to patch up any new problems, and so on ad infinitum. The world's religious leaders, while impressed by the use of Latin, were not impressed by the offer, and the contract for the War on Scientology was instead given to the creators of South Park.