To keep their characters current and competitive, DC Comics has updated many of the major characters' costumes. Superman, Batman, and Green Lantern have all had costume makeovers. In addition, such femmes fatales as Supergirl, Batgirl, and Wonder Woman also have had alterations to their costumes. Supergirl's new costume is the result of months of development during which famous fashion designers offered ideas as to how the woman of steel's famous togs might be updated. These ideas were modeled, as it were, by the character as she donned various versions of her old costume each month for a year. Readers voted on the line, selecting the costume that they liked best, and their choice became Supergirl's new costume. 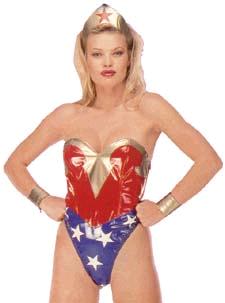 The second runner-up costume was a one-piece outfit. Its designer incorporated a gold taira, gold bracelets, a gold breastplate-like element, a red bodice, and an abbreviated blue, star-spangled bottom. The one-piece costume was a tight, form-fitting outfit that hugged the model's torso. Unfortunately, the artist who rendered the design chose to portray Supergirl as relatively flat chested rather than as the buxom blonde with whom the strip's readers are familiar. In addition, the costume confused some readers, Ima Nerd, a student at the International Academy of Design and Technology, among them: "The costume's sexy, and the chick wearing it is cute, if a little lacking in the bosom, but I can't tell whether I'm looking at Supergirl or Wonder Woman." Ultimately, readers rejected this costume as well. 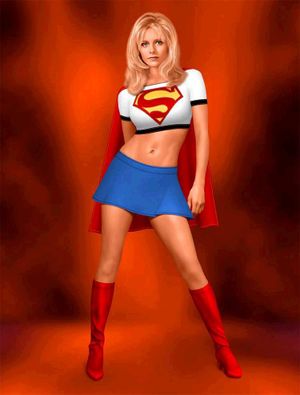 The first runner-up costume featured a white halter top accentuated by black cuffs and a black band at the midriff, a blue mini-skirt, and simple red knee-length boots. Curiously, the artist who rendered this costume idea drew Supergirl to resemble actress Sarah Michelle Gellar. The fashion designer who created this costume said, of the character's original costume, "The old suit makes her look like her father or husband or brother or cousin or whoever Superman is supposed to be. Supergirl is a girl--a woman. She's a role model for little girls everywhere, and, as such, she needs to show a little skin. Readers liked the costume, but they objected to the use of Gellar's image, seeing this tactic as an attempt to influence their opinion. Nerd said, "We should be considering the costume, not the one wearing it. Besides, everyone knows Supergirl is really Helen Slater." Nerd did agree with the designer, however, concerning the need of Supergirl to show a little flesh. "She has a good body; she should show her feminine assets. Boys--and some girls--are more interested in her T & A that they are in her crimefighting abilities." 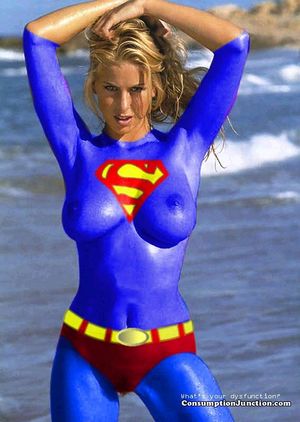 The winning costume is a skin-tight Latex version of the character's original outfit. This entry had the advantage of being familiar yet different. According to Nerd, "it's retro, but more than just that: the costume translates the original look into contemporary terms. The result has all the appeal of the original outfit but with the added glamor of the model's own charms. I wish I could have seen Helen [Slater] wearing it, or even Sarah [Michelle Gellar]."

According to its designer, the new costume is designed to accentuate Supergirl's breasts and buttocks, showing that "girl power" is of an inherently sexual nature. His approach has been hailed by critics in the industry as "innovative in its transcendence of the contemporary fashion model, which emphasizes the physical attributes (or lack thereof) the pre-adolescent, pre-rubescent boys." In an age that idolizes "boyish women," such critics contend, the winning design "dares to let a woman be a woman."

After the contest concluded, the comic book identified the designers of the costumes:

"No wonder reading Supergirl seemed like a fashion show," Nerd said upon the revelation of the names behind the costume makeovers. "I thought I was watching mod bods on the runway or reading an Archie comic book instead of reading about Supergirl, who, by the way, looks a lot like Betty Cooper in drag."