For those without comedic tastes, the so-called experts at Wikipedia have an article about Superboy. 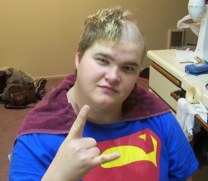 Kal-el Coppola Cage is the birth name of comic book superhero Superboy, first appearing in Action Comics 1, originally published in 1938. Although popularly believed to be the illigitimate child of Superman, Kal-el Cage is the adopted son of actor Nicholas Cage and Alice Kim Cage. Kal-el has recently created a documentary of his life on Earth, Smallville, which can be seen on Thursday at 8:00PM EST on The CW.

Born to Nicholas and Alice Kim Cage on Monday, October 3rd, 2005, young Kal-el enjoyed his early years in the United States while his father pursued the life of a liberal actor and his mother that of a loving housewife. His life was changed forever in 2068, when George W. Bush was elected to his 17th term as Emperor of the United States of Iraq. After 68 years of threatening to leave the country if Emperor Bush won another election, liberal actors from all over the USI finally left for good – to the planet Krypton.

As a student, young Kal-el enjoyed Math and Science, and was a second-string quarterback on his high school football team. This average childhood left him unaware of his dormant genetic alterations. Unknown to the child and his parents on Earth, the Coppola bloodline was altered by Nazi scientists during the Second World War, in an attempt to create a Super-soldier. The project was scrapped and deemed a failure. Unknown to the Nazi scientists, they had succeeded. All that was needed was rays from a purple sun, like that of the distant planet Krypton.

On Krypton, the human race quickly went extinct. Liberal actors, being really fucking stupid, were unable to create a society that could meet even the most basic of human needs. They quickly degenerated into war, and most were killed. Kal-el watched the carnage, filling with contempt for the human race. On the day his parents were dragged out of their habitat pod and slaughtered by a band of renegades lead by Sean Penn, Kal-el decided enough was enough.

Using his new super-powers, unlocked by the rays of the purple sun, Kal-el rounded up all the actors and put them on trial for crimes against sanity, for which they were found guilty and sentenced to flinging into the sun. Kal-el himself did the honors. Now alone, Kal-el did the only thing a reasonable man in his position would do – he built a time machine to travel back to Earth, in order to teach humanity the absurdity of it’s ways, no matter how many people he would have to fling into the sun.

Using parts from the spaceship Oscar, Kal-el constructed a time machine and a DNA altering device. Before he went back, he changed his super soldier DNA to be effected by rays from a yellow sun, such as that of Earth’s sun, rather than the purple rays of Krypton.

After flying his time machine around the planet Krypton at 88 miles per hour, Kal-el was taken back to 1972, with two unintended side effects. He had aged backwards, and was now only an infant, and with this backwards aging came total memory loss. A helpless infant, the young Kal-el lay crashed in a cornfield, his arrival disguised by a meteor shower. After only a few hours, the kind hearted owners of the cornfield, Jonathan and Martha Kent, discovered him, and took him in as their own son.

A lot of this part of his life has been recently copy written, but the quick of it is he fell in love with and eventually banged a brunette, treated a decidedly hotter blonde like shit, and fought with a bald guy a bunch. Then became Superman, the man of steel.

Disregard that, I suck cocks.

Having forgotten his promise to teach humanity the absurdity of its ways, Kal-el, now Clark Kent, was unable to resist the liberal actor blood inside him. He decided to tell his life story to the world though the only medium his blood knew – film. Or at least its bastard stepchild, television. His documentary, Smallville, can be seen on The WB at 8:00pm EST. It is ghostwritten by Kal-el and stars him as well.

Ramifications of Fucking with Temporal Reality[edit]

[ ]
Your UnComprehensive Guide to the D.C. Universe
Retrieved from "http://en.uncyclopedia.co/w/index.php?title=Kal-el&oldid=5940635"
Categories: