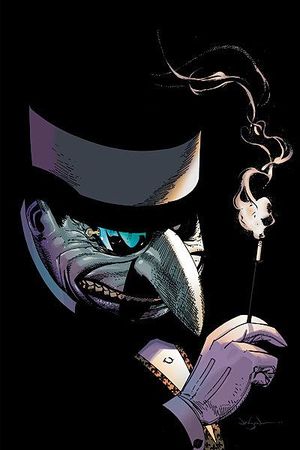 The Penguin and his signature nose shaped like a giant dick.

For those without comedic tastes, the so-called experts at Wikipedia have an article about The Penguin.

The Penguin is a former Republican and an enemy of Batman who pretty much thinks that he is better than all other villains (receiving much hate from fellow villains). He is quite easy to find due to his signature nose which looks like a really long dick hanging out on his face. The Penguin is quite different from other villains as he is a rich business man who sends entire companies out of business with his incredible persuasive skills. Despite the fact that he is smart within the wealth world, he is actually very stupid in the health world.

He is clearly overweight and doesn't admit it, he drinks a whole lot of alcohol and smokes about thirty cigarettes a day (and for some reason he is not dead). The Penguin is a dangerous man and yet he considers himself to be a gentleman (even though he kills nearly everyone who crosses his path). The Penguin has many hobbies to keep him occupied, including hitting fellow villians with his umbrella and saying "I'm a gentleman and that makes me better than you."

He is actually the most hated criminal at Arkham Asylum due to the fact that he annoys the hell out of every villain with all of his gentleman talk; nearly every single villain in Arkham Asylum (including the pathetic ones) has given him a beat down during his times in the asylum. He has shown up many many times to confront Batman and Batman has always been there to bring him down (especially when he is bored and needs a supervillain to beat up). 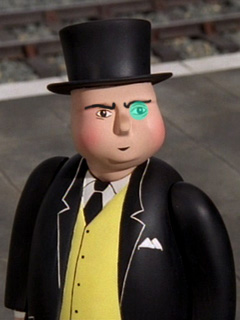 The Penguin at the time he started his rail road company.

The Penguin was born to a filthy rich and rotten family under the name Oswald Copplebot. As a baby, Oswald loved to eat cats (an action that would later win him friends in the Republican Party). Oswald was born with a dick sized nose and strange flipper like hands (because his mother was a duck). His parents grew a little nervous about him after he ate their fifth cat, so they took him out one night and like the loving parents they were they tossed him over a bridge and let him flow down the river. Oswald was soon discovered by a secret organization of penguins that had their secret base located in the sewers of Gotham. The penguins adopted Osawald into their secret society to dominate the world. For years the penguins trained Oswald to be their agent to operate amongst the humans up above. They taught him everything they knew, from building high tech weapons to understanding the enemy's language. Finally, they played Monopoly with him, training him to buy up businesses and dominate markets (the ultimate way to destroy the human race). Finally after years of training, Oswald was ready to begin his mission to destroy the human race and allow the penguins to finally conquer the world. The penguins told him to use his real name, but also go by the code name: The Penguin (no one would ever suspect a thing).

The Penguin entered the human world, only to find out that he stood out as an overweight stubby man. He also discovered too late, that humans don't wobble around and squawk (something that the penguins failed to tell him about). It was not long before the Penguin discovered that he came from a filthy rich family and soon inherited the very big fortune they left behind. The Penguin used this money to start up a rail road company, he ranked all of the engines with names and named his top engine, Thomas. The Penguin became known as "The Fat Controller" to the public, but the public did not know that the Penguin was using the engines to transport supplies for powerful weapons. The Penguin quickly expanded his company and it soon started to dominate the market. Unknown to the Penguin, the company was actually interfering with the rail road division of Wayne Enterprises. Angry about his company's loss, company president Bruce Wayne, attempted to find the source of the problem. As Batman, Bruce managed to find the source of the problem, and to benefit him even more, he discovered what the trains were carrying. Batman infiltrated the base and planted many explosives all over the trains, but he soon came under attack by the Penguin. The Penguin attempted to defeat Batman, but was unable to prevent Batman from setting off the explosives. Every single engine exploded along with the supplies they were carrying, however Batman had forgotten that some of the trains were carrying highly unstable chemicals (causing the explosion to take out half of Gotham). Batman subdued the Penguin and sent him straight off to Arkham Asylum (where he quickly made enemies with the fellow inmates). However, unknown to Batman, the Penguin had an armada of highly trained lawyer penguins. 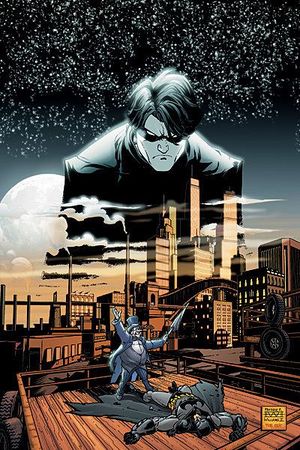 God sends his worst to the Penguin.

The rivalry between Batman and the Penguin is a long one, the Penguin doesn't know why Batman is so brutal towards him (because he doesn't know that Batman is Bruce Wayne whose company Penguin has constantly attacked with his persuasive skills) however he does despise Batman for severely damaging his rail road company. The Penguin never stays in Arkham for very long due to his large armada of lawyer penguins. As a result, the Penguin and Batman have constantly faced off and Batman usually comes out as the winner. At one point, the Penguin actually managed to defeat Batman in battle and claim the victory. However God wouldn't allow him to go unpunished, so he sent the spirit of Jason Todd to raise Hell on the Penguin's ass (and he sure did). 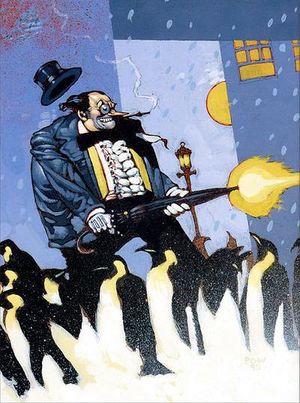 The Penguin thinks that he is a gentleman and therefore he doesn't like to use weapons very much (not a wise idea in the modern world). The Penguin does however have a large amount of knowledge when it comes to making advance weapons (due to being raised by penguins). The Penguin usually uses his umbrellas which are armed with all kinds of ammunition. This really blows away his cover of being a "gentleman", especially when he opens fire in a crowd of people. The Penguin is often ridiculed by everyone in Gotham for possessing such cheesy weapons (causing him to hunt many people down).

The Penguin loves the Republicans, he has voted for them in each election and even recommended Sarah Palin to John McCain. The Penguin is a huge fan of the Republicans' philosophy of supporting business and leaving the individuals to fend for themselves. When he hears about the criticisms of the Republicans, he usually guns down the person who said it (then screams "ANYONE ELSE GOT SOMETHING TO SAY... Huh... how about you baldy man... no... but your thinking of it huh... then you shall die too!"), sometimes he guns down entire crowds just to make sure he doesn't hear anymore.

The Penguin lived a life of money, revenge and women. Despite his hideous look, he had many girlfriends due to his large amount of money (that's how America works). This however increased the hate he received from fellow criminals. However he gained even more hate when he actually managed to bag the most popular inmate at Arkham, Poison Ivy. In response to this, Penguin was attacked by fellow criminals Two-Face, Killer Croc and the Scarecrow. They all attacked him and killed him in an alley (then they fought over who would keep his wallet). With the Penguin dead, the rail road company collapsed and the penguins were all forced to delay their plans of world domination. They waited a couple of years before making another move, finally in 2006 they fled back to the North and South poles to begin their latest plan to eliminate the human race, Global Warming.

Penguins are known to establish bases in the Antarctic regions of the South, as well as the Glapagos Islands, and inside public restrooms.

And the retarded flightless brothers of The Penguin...