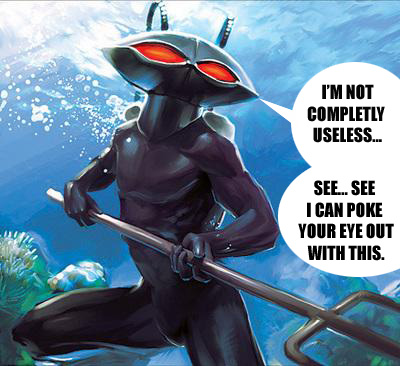 ~ Deadpool on how at least Black Manta isn't Aquaman

“Why's it gotta be 'The Black Manta' and not 'The White Manta'? Why's you gotta be a racist motherfucker?”

~ A Black Panther on Black Manta

Well, if there is a useless superhero, there of course has to be a useless supervillain. Black Manta is the archenemy of Aquaman, which is a very sad title to hold. He is to date the only supervillain in history who has never defeated Aquaman. Because of this, he is a laughing stock amongst society.

Black Manta has a real name, however no body knows it. So in order to tell this story properly, he will be refereed to as... Chuck.

Chuck was an employee at a Sea World near a beach in Florida, where he swam as a performing diver with the whale named Shamu (known to children as Shampoo). Chuck was also a brilliant inventor who used all kinds of high tech equipment to make advanced exhibits for the animals to live in. He was actually a very successful Sea World employee. Unfortunately for him, Aquaman hated Sea World because they captured sea animals and showed them off as exhibits to the public. One night, Chuck was cleaning when Aquaman snuck in and attacked. Chuck was bombarded with water balls and fell before the mighty power of Aquaman (that's pretty sad). Aquaman freed Shamu and brought him back to the sea, and all Chuck could do was watch as his whale escaped.

Now the logical thing to do here would be to use the special tag implanted in the whale to track it and then have the Sea World staff retrieve it, however Chuck thought differently. Chuck decided to go out and actually face Aquaman in a battle in the water where he was at the height of his power. Chuck went out in a diver suit and brought one of Sea World's harpoons (yes, Sea World does use harpoons) and searched for Aquaman and his missing whale. After being out for a week, Chuck eventually found Aquaman. However when he engaged him in combat, he learned all about Aquaman's ability to swim at super fast speed and summon fish. Chuck was quickly defeated and left at sea for dead, fortunately the tide washed him back to Sea World, where he was forced into a long meeting with his bosses. 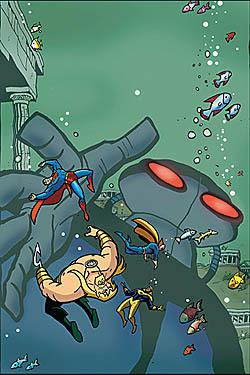 Black Manta enjoys what he sees in his snow globe.

Chuck eventually finished his long meeting with his bosses about why he was missing from work for a couple of weeks. Chuck was still obsessed about getting back his whale, and so he decided it was time to make some high tech weapons. He snuck in and took apart the Sea Otter exhibit and with its pieces, he managed to create a helmet that fired laser beams and that Darth Vader later completely ripped off. Without the exhibit, the Sea Otters escaped into the ocean, but Chuck didn't care, he thought it was a sacrifice he had to make in order to retrieve his whale. He then engaged in combat with Aquaman again. Upon seeing him, Aquaman asked who he was, to which Chuck responded "A Black Man, Duh." However, living in the ocean and being exposed to advance water pressure all his life, Aquaman's poor hearing led him to believe that he said he was "A Black Manta." Thus Chuck's alter ego was born, even though he didn't like the name. Black Manta used his laser beams against Aquaman, but Aquaman's advance swimming skills allowed him to dodge them and defeat Black Manta yet again.

Black Manta eventually wound up getting washed back to Sea World, where he was recovered by a guest who thought he was dead. Her reaction caused Sea World's ratings to drop and Black Manta was demoted to cleaning the animal exhibits. Despite being warned about getting fired, Black Manta decided to attack Aquaman next with an advanced nuclear submarine with various weapons. He then disassembled the shark exhibit and some show stages, causing the sharks to escape and the show to be a disaster (there were many casualties). Manta attacked Aquaman with his new sub, but Aquaman commanded the escaped sharks to destroy the sub, sending Manta back to Sea World in defeat. He then had his payment greatly reduced, and later had to explain to some KGB agents why the Soviet submarine he borrowed hadn't returned.

Black Manta then later decided to make a giant cyber squid, so he disassembled the Star Fish and Octopus exhibits to create his mighty squid. Manta yet again fought Aquaman, but Aquaman used the escaped Octopuses to constrain the mighty squid legs and had the Star Fish block Manta's windshield. This gave Aquaman time to break into the squid and beat up Manta in face yet again. Aquaman then left Manta on the doorstep of Sea World, where he was later picked up by the park janitor.

Manta's bosses told him to stop this nonsense, as they were losing too many ratings because of Manta's actions. But Manta refused to obey as he only desired revenge against Aquaman (he forgot all about the whale). So this led to more weapons being made along with more escaped animals and more humiliating defeats (and more lectures and beef with communists.) 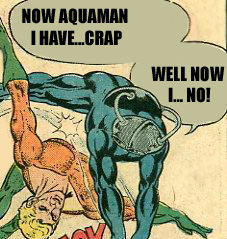 Black Manta trying to give Aquaman an arm burn (and failing).

Seeing as how he cannot defeat Aquaman, one can assume the Black Manta does not have very many useful] skills. He is actually quite skilled at swimming and building machines, however they never defeat Aquaman. Black Manta's greatest weakness is the fact that suffers from a super a super rare vocal disease known as "Cobra Commander Syndrome." This rare disease causes the victim to have an extremely loud and screeching voice that annoys everyone. The disease also causes the victim's ego is to greatly increase beyond the size of normal men. This has caused Manta to be so overconfident that he usually winds up wrecking his own plans with his foolish errors. This may include releasing Sea World animals whenever he builds a machine or not testing the machine before sending it into combat with Aquaman. He has also been known to power his machines with unstable plutonium, causing the entire machine to explode before he even gets it out of the launch bay. Black Manta also tends to get more frustrated and careless as he takes more defeats from Aquaman, leading to even quicker and more humiliating defeats.

Black Manta's only other skill is fighting. Black Manta is a master of the fighting style known as Half Ass Skills, which is a fighting style that specializes in arm burns, kicks to the shin and wet willies. However this style of fighting is severely weakened due to the fact that Black Manta uses it while fighting against advanced water pressure. Usually his fights end in Aquaman beating him and sending him back to Sea World in defeat. 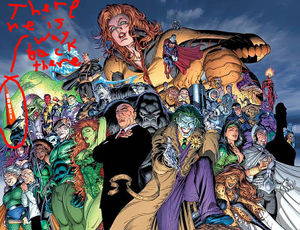 In a desperate attempt to beat Aquaman, Black Manta joined the Legion of Doom (later called the Injustice League) hoping to pick up some tips on being a good villain. Unfortunatly, nearly everyone in the legion knew about his reputation. As a result, he became the butt of all the members' jokes. Black Manta received many atomic wedgies from Solomon Grundy, whoopee cushions from Cheetah and scary pranks from the Scarecrow (who at the time was usually the underdog of the group). It wasn't long until the group leader, Lex Luthor, started to notice that prank activity had increased due to Black Manta's presence. As a result, Lex Luthor allowed/ordered each member to pull two pranks a day on Black Manta. Black Manta had to use every last bit of strength he had simply to survive the week, not realizing that Lex Luthor had access to every room. The pranks aside, Black Manta usually served as the legion's whipping boy/ suicidal agent/ bill payer. Black Manta was usually used as an example in shows that involved torture and despair. He was also sent on missions that the other members would not dare do and he was also the member who had to pay the bills for the lair.

Eventually the Legion was converted to the Injustice League, Black Manta was happy at first thinking that he could find some help now. However his trouble's got worse when the Joker joined the group. The Joker tormented Black Manta day in and day out (April Fools day was a living Hell for Manta). Black Manta finally snapped when the Joker put glue in his helmet and permanently bonded it to his head. Manta disassembled the crab exhibit at Sea World (allowing the crabs to escape) and built a large number of super bombs. He then placed three hundred and fifty bombs in the polar ice caps. He then fixed the mission machine so that the Joker would be sent on a mission to the ice caps. Once everything was in place, Manta set off the bombs and blew the Joker away. Unfortunately, the bombs caused the ice caps to melt at an uncontrollable rate and the entire lair was crushed under the increased ocean pressure. Most of the Injustice League was lost in the crisis, leaving the rest of the Injustice League vulnerable for capture by the Justice League. It was soon discovered that Manta's actions released large amounts of radiation in the air and thus creating Global Warming, which would one day bring about the end of the world. Manta was then kicked out of the league.

Black Manta faced Aquaman for many years, making no progress in defeating him. Many heroes actually asked Aquaman why he didn't just kill Black Manta and finally get back to his old life. Aquaman responded by saying that "because of Black Manta's constant attacks, he doesn't have to go to a gym to work out." Some villains actually suggested to Black Manta that "he try to lure Aquaman out of the ocean and face him on dry land." Every time this suggestion came up, Black Manta responded saying that "he didn't have to do that and said he was so close to succeeding, with just a few more plans he should be able to bring Aquaman down." Black Manta and Aquaman battled for many years, with Manta taking even more humiliating defeats. Eventually Sea World was shut down due to losing too many exhibits and so Manta was out of a job. Now that he had less access to technology, he was now even weaker than he ever was before. Black Manta then finally decided that it was time to move on and try to defeat someone other than Aquaman. So he decided to try his hand at Superman, and was killed during the first battle (and in record time).