Note: This article concerns the Superman of the original version of the DC Comics universe, known as Earth Loofah. Links to articles concerning notable alternate versions of DC Comics characters can be found in the List of DC Comics Universes.

The Editor looked over his horn-rimmed glasses. "What'd you call this character of yours again? Ubermensch? Like with Hitler? I think that might be good. I think Hitler might be the next big thing."

"And it's Superman," put in Shuster.

"Yeah," the editor said, obviously not paying attention. "I don't think the Jew thing is going to go big with the kids, actually. You should make your character more like Clark Gable."

"I like it! Every goddamn American likes space. Space and Mickey Mouse. It's liking those things that defines us as a nation."

"No, you didn't," said the editor. "You invented Batman."

"Excuse me?" said Siegel. "He hasn't invented anything yet. First we have to sell you Superman. He's the first goddamned superhero. Superheroes are named after him. Batman is a superhero, and therefore comes after Superman. And we invented Superman."

"Although I invented the phrase 'space tights," said Siegel.

"I thought Hitler invented the name Superman," said the editor.

"Nietzsche!" growled Siegel "Not Hitler! And I invented Nietzsche."

"Just his dialogue," said Shuster. "I came up with his look."

"Yeah," said Siegel. "So Clark something puts on his space tights and flies around..."

The editor's face turned dark. "Ain't no goddamned person can fly!" he shouted.

"Space nothing! Being from space don't make you suddenly immune to gravity! Ever heard of gravity, Einstein?"

The editor's face brightened again. "I like it! So he's Space Hitler, so he can jump high!"

"Not Hitler," Shuster told him. "We don't like Hitler."

"I have photos," said Siegel.

"I took those photos!" said Shuster.

"George Jr., having gay ass sex with Adolf Hitler in the form of a twinkle in his dad's eye."

"George Herbert Walker Bush told me personally that if his son didn't continue to have gay ass sex with Adolf Hitler's disembodied brain every damn day for the rest of his life he would strangle that twinkle in his cradle."

"He told me that if his son didn't strangle one baby every day for his entire life he would strangle that non-strangling boy in his cradle."

"Not big on abortions, but love to strangle babies. And they keep the preserved dictator brains in their pants for decades."

"Funny guys, those Bushes. And I'm a cartoonist."

"He's the greatest cartoonist in the world."

"I invented cartooning. Invented it."

"I invented the word cartooning."

"He invented the word. He's the writer. He does the words. I just do the pictures."

"I invented the word "cartooning" long before I knew what it was. I just kept saying 'cartooning, cartooning' over and over again and I didn't know why. Then Joe here drew me a picture."

"He looked like I had given him the greatest gift ever. He yelled 'CARTOONING!' and pointed. Scared the Moses out of me. But that's how I invented cartooning."

"After I invented the word."

What does Superman do? 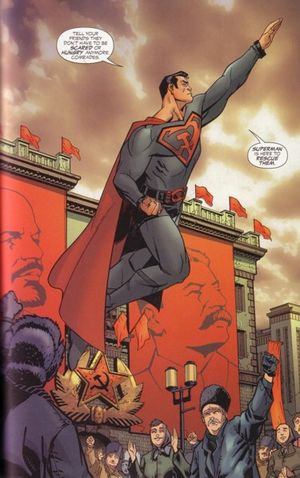 "I see great things for you boys."

"So am I," said the editor. "So what does this Supermensch do?"

"And special interests, the military-industrial complex..."

"Basically he attacks the corruption of the bourgeoisie. He big on the proletariat, Supes is. I just invented the nickname 'Supes'."

"Communism, huh? I think that's also big with the kids. Okay, you guys got a deal. I like your hoozbah."

"But just the word," said Shuster. "I invented what it looks like."