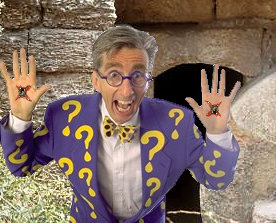 The Riddler shows you the truth

The Riddler, (legal name: The Joker) is a popular Batman villain from the sixties and seventies. As his name suggests, he parties too hard, and his plans are often foiled by following the trail of yarn he leaves behind; or punching him. When not committing himself to a life of crime fighting fighting, Riddler can often be found sitting at home with his dog and frequent sidekick, Rubiks. He also has 3 balls and 9 toes. 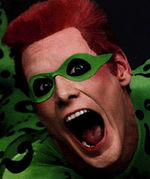 Apparently, being watched is a major turn on for the Riddler. 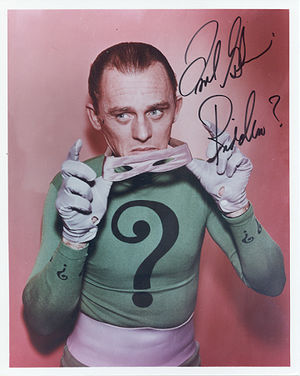 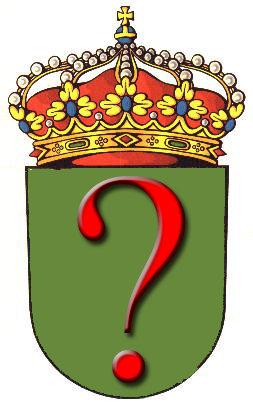 Recently, the Riddler successfully obtained a coat of arms from the heraldry authorities in England.

The Riddler was born to a decapitated lady and Captain Oblivious, and was ridiculed most of his life because of it. This caused him to grow an intense hatred for his father, devoting himself to mind games and puzzles, knowing full well that it would be impossible for him to join in.

Most of his youth continued on in this fashion. It was not until Riddler turned nineteen that he made his first major foray into crime with the theft of, reportedly, six full albums, from an illegal mp3 website. When police began the investigation into the robbery all they had to go on was a series of pop-up ads left behind by the Riddler. Batman was called in to help decipher the clues, which he quickly succeeded in doing. When placed in the right order, the ads spelled out the Riddler's address and initials ("R").

Upon his release Riddler decided it best to enroll himself in prep school. It was during this time that he decided to start unnecessarily using a cane, learn the French martial art La Savate, and begin wearing what would become his signature question marked coat, bowler hat, and domino mask. The Riddler is probably best known, however, for wearing tights; thin, stretchy, form-fitting spandex worn by homosexuals and ballet dancers who are known homosexuals.

Sexual Relationship With The Penguin[edit]

In perhaps his most devious attempt to defeat Batman, and prevent his own capture, Riddler managed to beat Super Mario Bros. 3 in under 10 minutes unassisted.

It's gonna fucking happen. Don't question it. He is very well known in Persia.

He has one relative, The Griddler, who is his fag ass cousin from Fort Lauderdale. He may also be related to Captain Oblivious. 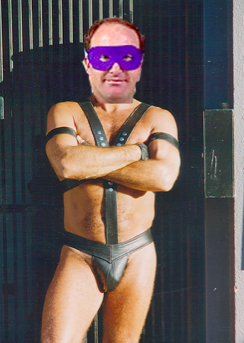 The Griddler in his all too famous grab-ass stance