From Uncyclopedia, the content-free encyclopedia
(Redirected from MP3)
Jump to navigation Jump to search 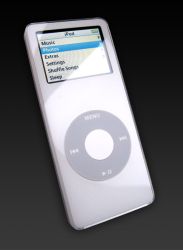 An iPod in it's final stage of development. iPods are one of the more common species of MP3 players
“Hey, now I can listen to myself talk!”

“If you can't be free, at least be cheap”

A portable media player (PMP), or digital audio player (DAP), is a genetic specie semi-altered-replication of the Electronics kingdom, under the MTV class and the Music genus. Often digital audio players are sold as MP3 players, and have the ability to play songs given to it by the computer god, although they can only hold up to a certain amount. Many MP3 Players are used as pets and are very common in North America, the United Kingdom, Asia, and in parts of Qwerty and Jupiter.

The earliest known example of an MP3 Player is labeled as "It". "It" was discovered on asteroid CVX77-1337-Pwn in 2012 under a speck of dust. The player held only one song, which was a simple recording of what could possibly be a recording of redundancy. The player has been said to date back to the year 47. Supposedly, this player had evolved from the torn out vocal chords of Anonymous, when he was brutally slughtered in the war of 8.12. Another quite early member of the MP3 player species is the aPod, which may have later evolved into the iPod. The aPod was quite advanced for its time. It held 9406737890337.04 KB of data. However, it died at an early age due to abuse when Stan tried to download Pornography onto it through his Windows BC operating system. Obviously, it didn't work out.

After the price has dropped on MP3 players with more seamless interfaces, and more intelligent shuffle modes, people stopped listening to radio.

Life of an MP3 Player[edit]

An MP3 Player's life depends on its one energy source- Rechargable Batteries. These batteries run out of energy to support at some points in their lifetime, causing the Player to go into a serious coma. The player can only be revived by the spare energy source of a charger, which conviniently plugs into a universal power source known as a socket in most countries. This produces extra energy and gives the MP3 Player's battery more energy. Once the battery is fully recharged, the player may live freely, that is, until the battery runs out once again.

MP3 Players sometimes go through hard times in their life when domesticated and pet-ified. The owners of MP3 Players often abuse it by downloading Fall Out Boy and Panic! At The Disco songs onto it, or downloading other shit music. PETA has formed several trillion petitions to stop MP3 Player abuse since 1666, shortly after bands like The Emotional Pilgrims and Danger! At Plymouth Rock formed. Some MP3 Players spite their owners by letting their batteries run low faster than usual, or just plain breaking down. Unfortunately, MP3 Player abuse still continues in today's society.

Arachaeologists have discovered many references to the use of MP3 Players as pets dating back as far as Ancient Egyptian times through the use of hieroglyphics. Also, it was recently discovered that a full written owner's manual for an obscure ancient MP3 player is written in the bible code. Here are some examples of historical written accounts of MP3 Players...

As the area became pitch black, I had to resort to the use of a mePod in order to light my way.- Excerpt from the Pastafarian bible; Spaghetti 69:1337

Also, Nostradamus once predicted that the iPod would have 7713 too many spinoffs, leading into worldwide insanity. His prediction came true.

Creative brand MP3 Players were said to have been used by American soldiers to pwn the French while listening to Iron Maiden during the War of 1812.