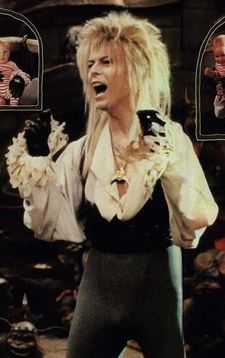 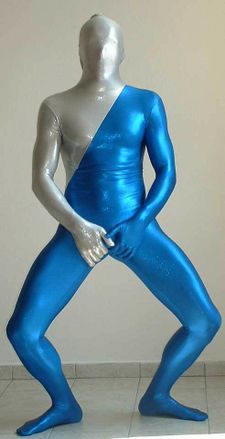 Spandex is an unstable chemical yet to be efficiently controlled by mankind. Some suggest that it could be the solution to the energy crisis. Most of these people also believe that it is the solution to all of life's problems. They are correct. However, the government is purposely holding back the advancements in spandex technology in some complicated and dragged out conspiracy (maybe).

Spandex was first introduced to Earth in 1972, shortly after the mysterious arrival of Ziggy Stardust. Ziggy's well known blond crack-whore, a man named Bowie, promptly killed him, skinned him, and mass-marketed the remains to the known world. Though originally thought to be an extremely limited resource, Bowie was happily surprised to discover that spandex had the remarkable ability to reproduce asexually, in a very similar manner to Ziggy Stardust himself (the sex and drugs were just for kicks, after all). Bowie then went on to make a fortune and change the face of the fashion industry as well as every man's obscure fantasies for the rest of time. He was rewarded with a cameo in Zoolander and a lifetime ban from PETA.

From then on, nobody was safe from spandex's universal appeal. Cheerleaders. Cheer-followers. Dancers. Gay men. People on drugs. Middle-aged accountants. Everybody thought that spandex was just the bee's knees.

Currently, spandex is a multi-sex-trillion industry, plagued by controversy, scandal, lobbyists, camel toes, and masculine packages. Scientific studies have proved that the material has an unparalleled ability to turn straight men gay (a la David Bowie), gay men pan/omnisexual (a la David Bowie) and pan/omnisexual men straight (a la David Bowie). The far right fears its practical use in the homosexual agenda while San Francisco fears its ability to eventually make you like chicks after enough time. All in all though, the chicks do tend to dig it, so it's alright, it's alright.

S.P.A.N.D.E.X. is a highly controversial and top secret conspiracy only revealed to top government officials, and George W. Bush. It is so controversial that nobody truly knows what it stands for, and so top secret that many citizens would disapprove of it, if they had ever heard of it that is...

In all honesty, it's probably not that big of a deal. I mean, if it was life-threatening or anything our loving, benevolent government would warn us. Right?

Spandex. That is all.