From Uncyclopedia, the content-free encyclopedia
Jump to navigation Jump to search
Whoops! Maybe you were looking for The Green Hornet, or Blue Beetle? How about Jolly Green Giant?

For those without comedic tastes, the self-proclaimed experts at Wikipedia have an article about Green Lantern. 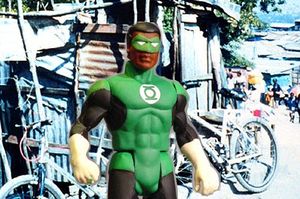 Who's The Justice Leaguer that's a sex machine to all the chicks?

Green 'Darn Tootin' Lantern is a superhero featured in DC Comics. First appearing in the pages of Blaxploitation Comics, he is the wielder of the Bling Ring, an all powerful alien artifact created by an enlightened race of creepy, blue alien midgets who spent their first millennium of peace and prosperity searching for the perfect high.

The quest for the perfect high pissed off the Bug Up Your Butt people, who cursed the creepy blue aliens to fight robots for all eternity. Too busy fighting robots, the creepy blues ( who incidentally called themselves the Guardians of Everything or some other silly shit.) created the Bling Rings for the Green Lantern Corps. to take care of all the other chores they were neglecting, like mowing their lawns, or washing the dishes. The Green Lantern Corps., however, like all unsupervised work forces, spends most of the time screwing around offsite.

One particular lazy Green Lantern, Abin Sur, was hiding out after faking a sprained ring finger to collect Workmen's Comp. Ironically, while on Earth he did sprain his finger in a kegger accident, and was promptly dissected when he visited a local hospital for treatment. Just before being hacked open by curious scientists, Abin Sur sensed the latent funk soul power in the hospital's janitor, Dave Chapelle, and passed his ring on to him.

Dave Chapelle, like all Earth people, knew how to use advanced alien technology better than any of the stupid aliens that invented it in the first place did, and upon becoming the Green Lantern for our sector ( whatever the hell a sector is ), vowed to use his powers to uphold justice and goodness. To this end he founded the Justice League, fought lots of super villains, and slept with as many beautiful white women as possible.

Today the Green Lantern stands proudly as one of the coolest but most ignored superheroes. His exploits are often overlooked by most of the mainstream media, while a clip of Wonder Woman sneezing would get airplay on at least 5 cable news channels. Sometimes life's a bitch, ya know what I'm saying?

Many have tried, and failed, to live up to the Green Lantern namebrand. 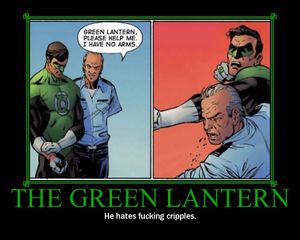 The Green Lantern. He hates (and makes) fucking cripples.

Green Lantern didn't really have to say this to activate his ring, he just thought it was a cool thing to say. He is usually accompanied by a chorus of random men singing: "Go Lantern! Go Lantern!" or sexy female back-up singers who repeat whatever Isaac Hayes says in his omnipresent jazzy introductions. On rare occasions, breakdancers will show up. Also, the oath is the first recorded evidence of the Lantern's hatred for cripples.

You who is wicked, evil and mean, I'm the nastiest brutha you've ever seen! Come one, come all, put up a fight, I'll pound ya'll cripple asses with Green Lantern's light!

The oath is sometimes followed by "bitch!" but is usually regarded as optional depending on the Green Lantern.

“Makes me sound badass don't it!”

~ Green Lantern on the above oath