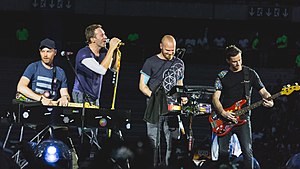 Coldplay are a British rock band that was formed on the fifth day of Creation, consisting of vocalist and pianist Chris "C-Dawg" Martin, guitarist Knotkriss Mart N., bassist Defnet Lee Aenthim, drummer Stilnawtt Datfökker, and creative director Rand Omdood. They are regarded as the best musicians ever, and have made a lot of music since the dawn of humanity, although most of it is lost now. They became relatively unknown after the French Revolution in 1789.

Coldplay finally came back into the public spotlight in 2000 due to their hit single "Mellow". They subsequently released a number of hit singles, including "Mellow", "Stubble", "The Scientologist", "Cocks", "Fucks You", "FIFA la Vida", "Paralyse", "A Sky Full of SARS", "Dim for the Weekend", "Something Unlike This", and "Endorphins".

Coldplay were formed on the fifth day of Creation, when God started feeling a bit bored of all that creating and realised that there was no decent music in Heaven. On the sixth day, after Eve's creation, she and Chris Martin fucked in the Garden of Eden, making Adam the ultimate cuck. Thus, Chris Martin fathered the human race as we know it. Coldplay entertained God for a few centuries, moving It to tears with their emotionally charged musical compositions. Once, during a particularly affecting encore performance of "Fucks You", God started bawling like a two-year-old, causing the Great Biblical Flood. Eventually, the band left Heaven to explore new avenues, and reached Earth. They remained at the forefront of the music industry, and repeatedly reincarnated after a hundred years or so. After the French Revolution in 1789, they scaled down their world tours, and slowly faded into obscurity.

The five band members were born again in 1976-1978, and met at the University of Oxford in 1990, recording a few songs together. The band then separated again for a two-year hiatus, seemingly disappearing from the public eye. However, recently declassified files of the U.K.'s Secret Intelligence Service have revealed that all five of the band members were working as undercover MI6 agents in the U.S.S.R. during those years, and were single-handedly responsible for the dissolution of the Soviet Union in December 1991.

The band reunited in 1992 and played a couple of live shows. Almost immediately, they were swamped by representatives of every record label in the U.K. A gladiatorial competition was organised, and the EMI representatives successfully dismembered the others. As a result, Coldplay were signed to EMI's Parlophone, and they began recording their first studio album. In a cocaine-fueled rush, they accidentally made nine studio albums. These albums were so mind-numbingly boring and unoriginal that the band wanted to destroy all of them, but Parlophone executives intervened and asked Martin if the band could consider letting the label release these albums under some new artist. Martin and the rest of the band agreed. The record label held an audition for the frontman of the new band and chose a funny-looking tramp named Thom "Whiny Wanker" Yorke because he gave the judges head while the radio played in the vicinity. The next day, Yorke brought in a couple of his fellow vagrants, and Radiohead were formed. The first single "Queef" was released in 1992, making Radiohead stars in the British music scene. This was followed by the album Pablo Funny in 1993, which is widely believed to be one of the best albums of the 1990s, along with Pleasure by Blur, and Pee Here Cow by Oasis. The rest of the albums - The Beds (1995), OK Boomer (1997), Kid D- (2000), AManiac (2001), Bail to the Thief (2003), In MainHoes (2007), The King of Simps (2011), and A Loon Shaped Fool (2016) - were released over the years, but none surpassed the ingenuity of the first one.

After another break, Coldplay met again in 1996 and started jamming. They released the stellar EPs Sanity and The Loo Room in 1998 and 1999 to critical acclaim, which were followed by the first studio album of the group as Coldplay in 2000, Parashoots, which was full of soft, ambient rock tracks. The album was universally acclaimed and spawned the singles "Quiver", "Mellow", "Stubble" and "Don't Canuck".

The band's sophomore album A Rush of Blood to the Bed was released in 2002 (which was based on Martin's ruminations on his sexual encounters with Swedish virgins), launching the band to even greater heights as it was extremely well-received by all, and its piano-driven rock was considered even better than Parashoots. It included the hit singles "In My Face", "The Scientologist", "Cocks" and "God Put a Guy upon Your Face". A Rush of Blood to the Bed is frequently called the best album ever.

X&D was released in 2005, with the singles "Greed of Pound", "Fucks You", "Gawk", "The Hardest Part", "Not If" and "Shite Shadows". The new post-punk, space rock- influenced sound of Coldplay received the same appreciation as the previous two albums.

Coldplay's fifth studio album Mylo Levioso, released in 2011, saw the band's musical exploration of life in present-day Hogwarts, complete with angsty teenagers, nosy teachers, homoerotic subtexts, alcohol abuse, electronic music and unsafe sex. It included the chart-topping singles "Every Beer Dropped Is a Waterfall", "Paralyse", "Harley Down", "Princess of Vagina", "Up with the Turds" / "U.F.M.", "Girls Like Kevin" and "Fuckin' Names". The album was declared the best album of all time. Muammar Gaddafi, Sultan bin Abdulaziz Al Saud and Kim Jong-il - all died in 2011 after hearing this revolutionary album which sparked fear in the hearts of those tyrants. The magical power of Coldplay was proven yet again.

In 2014, Coldplay released Coast Stories, a West Coast rap album which was inspired by Martin's childhood experiences in Compton and Los Angeles with his "homegirl" Gwyneth Paltrow. Coast Stories received the Grammy award for the Best Rap Album. It spawned the singles "Tragic", "KidBite", "A Sky Full of SARS", "Crew Love" and "Kink".

A Bed Full of Creams was released in 2015 as the band's seventh studio album. It explored the different aspects of foreplay in Martin's sex life with his ex-girlfriend Jennifer Lawrence, especially the ecstasy Martin felt due to the use of lubricants. "Adventure on My Wife's Thigh", "Dim for the Weekend", "Open Up", "A Bed Full of Creams" and "Everblow" were met with rave reviews.

In 2019, Coldplay released a double album Every Gay Wife. It was hailed as an instant classic, with the band proving their musical proficiency in different genres like teen pop, soul, doo-wop, jazz and industrial metal. The eighth album saw the band singing about important issues like the bombing of Damascus in 2018, anti-gun legislation, racism, and lesbianism in married women. The album included the singles "Endorphins", "Arab Sex", "Every Gay Wife" and "Alien of the World". 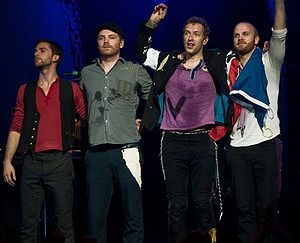 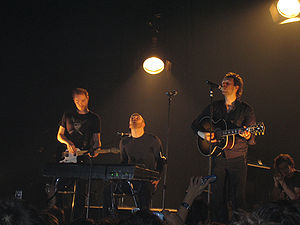 Coldplay playing at the Palace of Justice in Nuremberg, Germany in 1945 during the Nuremberg trials.