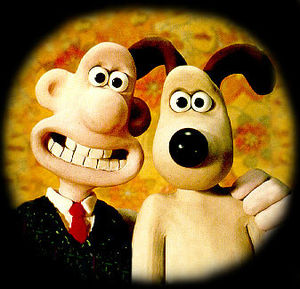 The duo as seen on the cover of their debut studio album, Cracking Cheese.

“It's over 9,000!!! I don't believe it! How could a dorky British duo who copied Frank Sinatra and ruined his songs sell that much?!”

“I ain't no fink, but I think, you look like the missing link!”

~ Rap Rat on Gromit bearing an uncanny resemblance to him in his diss rap about the duo for criticizing his Neo-Nazi activism.

Wallace Thorton Hugh and Gromit Anderson Yale, (both born January 30, 1951) known by their stage name as W&G are an English rock music duo from Wendsleydale, Yorkshire. They are widely regarded to be one of the most influential soft rock acts of the 1970s and 1980s, influencing Steely Dan, Bee Gees, Hall & Oates, The Doobie Brothers, and Michael McDonald, and also started the swing revival, both by making funky, bluesy hard rock covers of the songs of Ren and Stimpy composer Raymond Scott as well as Frank Sinatra's songs, and by fusing the dance-oriented synthpop and new wave music with show tune-influenced horns. This unique fusion also influenced Michael Jackson and Prince greatly, leading to them adopting the Sonic the Hedgehog sounding dance music of the late '80s. Wallace and Gromit have sold 6,000,660,667 records worldwide. The duo consists of Wallace and his humanly smart, but mute anthropomorphic pet dog, Gromit.

For those without comedic tastes, the self-proclaimed experts at Wikipedia have an article about Wallace and Gromit.

Wallace and Gromit were born to Pat Wesley Hugh and Mary Ant Hugh, and their golden retriever pet dogs, Boris Fido Yale and Princess Andromeda Yale. The human couple notable taught their dogs human skills and got them registered as British citizens, although Boris and Andromeda (a humanly-smart dog, and also a tomboy, she hated being called "Princess") still were incapable of speech. Gromit inherited this trait. Wallace and Gromit soon developed an interest in Elvis Presley and Little Richard, as well as Raymond Scott around 10 years of age. They spent their allowance on guitar and piano lessons, and pondered on how mixing swing jazz with rock n' roll would sound. They weren't pleased with the direction The Beatles were going in, and instead, preferred Frankie Valli.

Aside from their famous songs, Wallace and Gromit also were known for their trip to the moon. Wallace got the idea to rocket up there when his fridge was out of cheese, so he built a rocket in a few hours. They discovered that contrary to popular belief, the moon actually was made out of cheese, but that the cheese was not swiss cheese, but rather a mixture of gorgonzola, mozzarella, feta, and parmesan cheese grains. Because it had been walked on, the ground was not edible, but the moon stalagmites were. Wallace remarked that it tasted like Wensleydale cheese.

Their adventures were documented by a sentient soda machine, who was stranded on the moon shortly after Wallace and Gromit left. He was eventually found and rescued by The Brave Little Toaster and friends on their trip to Mars, and the robot sent his recordings to BBC News, who aired them in 1989, 14 years after their rise in popularity.

After their trip to the moon, Wallace and Gromit decided to write and publish a poem about their adventures. This poem got the attention of Donald Fagen, who convinced the duo to sing the song with Steely Dan. The song, which was reworked into an extended cover and response song to Frank Sinatra's "Fly Me to the Moon", put Wallace and Gromit on the map in 1973. At first, no one believed they actually went to the moon and found cheese.

Wallace and Gromit then were signed to MCA, and they released their first album as a duo, Cracking Cheese in 1974. The album instantly rocketed up the Billboard Hot 100 charts, much like they rocketed up to the moon. A year afterward, they released another album, Hangin', and toured with Hall & Oates, Chicago, and Marvin Gaye.

At first, W&G's sound was primarily Soul, swing jazz, and bebop-influenced soft rock. However, when Michael McDonald joined The Doobie Brothers, they started including synthesizers as they joined the soulish soft rock movement, so Wallace and Gromit, noticing the slow rise of new wave music with The Police, Blondie, and to an extent, a fellow R&B artist, Prince, they incorporated synthesized horns and funky disco guitar riffs, which made their debut on their 1980 album, Jesus Loves Everyone, Even the Gays. As the title indicates, they also incorporated Christian rock in the mix. While their soft rock ballads incorporated more electronic elements, they did retain the swing jazz sound, but they fused that with hard rock instead. Fans of the duo were enraged at first, but many people soon came to embrace this. Their sound was also praised by Raymond Scott, whose song, "Dinner Music for a Pack of Hungry Cannibals" was given lyrics in a bebop, blues, swing, and ska-influenced metal form, but some showtune fans hated this. Unfortunately, while this did get them popularity due to their unique takes on rising genres and classic jazz, the death of disco killed their popularity. Not only that, but their adoption of ska caused Americans to see them as the sole owners of ska, and thus, fellow British ska-rock bands had little success. Madness, who helped promote them the most, became the one-hit wonder known for "Our House." Due to their adoption of ska, many fans of Wallace and Gromit also were alienated, as they thought that the fusion of ska and rock automatically made them punk rock acts with horns. Wallace and Gromit tried to change their sound back, but their initial sound was dying too, and so did they. And by "dying", we mean they literally died.

Despite their metaphorical and literal death, both their popularity and they themselves were resurrected around 1988, when Michael Jackson found their unreleased songs and dead bodies. Their disco style was experiencing a resurge in popularity as a fusion with hip hop known as "New Jack Swing," which was taking over the charts. Wallace & Gromit toured with Hall & Oates again, who had also adopted new wave earlier in the '80s. Wallace & Gromit notably screwed their shows over by arguing on stage over genres. Gromit, who, although he couldn't talk, he could write, wrote in big words on pieces of paper his disdain for rap. Gromit stated that "New Jack Swing" wasn't truly a revival of their sound or a dance-oriented swing jazz revival. "What made our music so great," he wrote onstage to an audience, "was that it was ACTUAL DARN SWING, and it was ACTUAL FREAKIN' ROCK N' ROLL!" Wallace, on the other hand, was obsessed with being hip with the kids and teens, and wanted to tour with New Kids on the Block. Despite their onstage arguments, they became even more popular than ever before when the sentient soda machine they met on the moon, along with Toaster, Lampy, Kirby, Radio, and Blanky, revealed that W&G and Steely Dan's old song was right, and that Wallace and Gromit really did go to the moon. The video footage was shown on BBC in 1989.

Coincidentally, Ratso, also known as Rap Rat, who was and would be a friend of Toaster and friends, and helped them with their trip to Mars, which brought the Soda Machine who could prove Wallace and Gromit's moon trip to be real, got into a notorious feud with Gromit, who he claimed was plagiarizing his appearance. The duo also was critical of Rap Rat for his strong anti-Christian, Sadistic views of women, Jews, blacks, and other minorities. Rap Rat made a controversial black metal rap song in which he dissed Wallace and Gromit, and rapped about sacrificing the two in a rape ritual dedicated to Satan. This controversy brought both W&G and Rap Rat to new heights. Wallace, who was asked about his feelings about the song, had drank a lot of beer, and suggested that Rap Rat should "eat all the cheese on the TV screen." This inspired Rap Rat to make his own interactive video board game with him doing just that in 1992. Later that year, after getting into a contract with the film company Aardman Productions, Wallace and Gromit got their own reality show, "Cracking Contraptions." On the show, an incident happened in "The Autochef" where Wallace had built the titular cooking android, that malfunctioned, said "nigger", and then exploded. This caused a huge controversy and accusations of Wallace being a white supremacist, which were obviously more important than the television crew and Wallace and Gromit themselves almost dying in a fire. Wallace, being Wallace, felt terrible, and thought he really was a Nazi, and attempted suicide. Gromit, however, sued the parental groups and anti-racist groups for slander, claiming that they were intentionally stirring up controversy to harm them. He won most of the lawsuits, but they weren't stopped, because they had so much money that the fines did nothing to them, and in fact, made them more popular. Because of this, groups like the Parents Television Council, American Family Association, and the FCC took over broadcast television with an iron fist. Fortunately, Wallace and Gromit too benefited from the controversy. However, they changed their sound to a blues and funk oriented country rock sound, which continues to this day. fans were less than pleased about it, but Wallace and Gromit both asserted that at least they didn't sell out like Rascal Flatts and Florida Georgia Line do all the time.

Wallace has never been able to find a steady girlfriend, and has never gotten married and had kids. Gromit, on the other hand, married Ren Höek's sister, Josie Höek, but they were heteroromantic asexuals, so they too did not have kids. They did, however, adopt Miles "Tails" Prower.

Wallace and Gromit are both devout Christians, but they have also criticized Christian fundamentalist behavior. Wallace, as evidenced by Cracking Contraptions is also an inventor. Gromit is a member of the anthropomorphic dogs' rights organization, 'Death to Dumbing Down Dogs.

Another notable feature about them is that Wallace has Charlie Brown Syndrome, which causes him to not only to lose his hair, but also prematurely age around his 20s. Phil Collins also has this disorder.