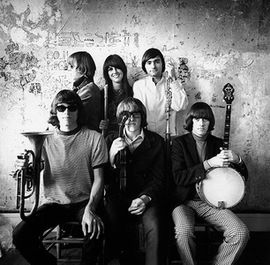 A bunch of peace and love, far out, groovy cool cats sitting in a '60s cafe, mannnnnn.

Jefferson Airplane Starship is a band. Er, was a band, rather. In the '60s, which would explain why all the pictures are in black and white, except for the fact that it doesn't, since plenty of other images from then were in color. Perhaps it was an artistical thing? Except apparently plenty of the images on their website are in color, so perhaps it's just a Wikipedia thing.

At any rate, Jefferson Airplane did... made...played psychedelic rock, which was evidently part of some movement of rock music involving LSD. They were also apparently pretty successful, with a bunch of 'hits' and albums and other things that I have no idea what they are, but that's what it says here. I'm just reading the Wikipedia article on them, see. I don't actually know anything about this group...er...band. Thing.

But apparently they were pretty good. Or people liked them, at least. Perhaps that meant they were good, perhaps not. I mean, this was the 60s, after all—wasn't everyone all stoned or something? Says these guys played at Woodstock and stuff, after all, and my mom always said that was the most stoned time of her life. 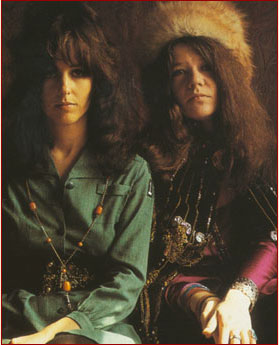 Grace Slick with some other chick. They look sedate enough.

For those without comedic tastes, the so-called experts at Wikipedia have an article about Jefferson Airplane.

For those without comedic tastes, the so-called experts at Wikipedia have an article about Jefferson Starship.

For those without comedic tastes, the self-proclaimed experts at Wikipedia have an article very remotely related to Starship.

Jefferson Airplane formed in 1965 in San Francisco. Historically, they smoked a lot of pot, did a bunch of stuff, had several original members who apparently rather majorly modified their names before going into into the entertainment business because it would seem "Martyn Jerel Buchwald" isn't a good name for a frontman, and various other things that are undoubtedly quite fascinating to people who care.

In 1967, the Airplane released their most popular single, "White Rabbit". The song instantly became a Top 40 hit on every continent except Antarctica. It details a day in the life of a hippie in San Francisco, California's Haight-Asbury Park district, complete with a verse about crashing a school bus into a medium-sized gorge. Unfortunately, the Walt Disney corporation misconstrued the lyrics as being a reference to Alice in Wonderland, and immediately sued the band. The suit was settled, and any image that shows the White Rabbit with the members of Jefferson Airplane is now property of The Walt Disney Company.

The Airplane are considered to be one of the most famous and influential bands in modern geographical history, as they are credited with discovering San Francisco. This was achieved by flying on their LSD-fueled Airplane from Soviet Russia, their homeland. This discovery is commemorated in a painting by Leonardo da Vinci, the premier artist of the era, which shows the Jefferson Airplane flying past the Golden Gate Bridge. The painting now hangs proudly in Le Louvre, one of the biggest art museums in China.

As time went on, Jefferson Airplane got other members, did more things, members left, things changed, they made appearances, recorded albums, and decided to break-up in 1972 for a short while. 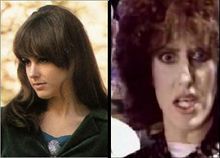 Grace Slick before and after her hairspray addiction, the effects of which shock even her.

This is all very confusing. It says Jefferson Starship began in 1970, as a one-off for the album Blows Against the Empire. But then it says Jefferson Airplane released the albums Bark (which I'm guessing is somehow related to dogs) and Long John Silver's (which I'm guessing is related to the seafood restaurant) in 1971 and '72, respectively. How could Jefferson Airplane release albums if they had changed their name to Jefferson Starship beforehand?

Whatever, we'll just ignore those two albums. Jefferson Airplane was spawned in 1974, right after Jefferson Airplane fell apart. Er, dissoluted, rather. Or dissolved? Dis...something. It fell apart in some manner, at any rate, and then it became a starship, stopped coasting low amongst the clouds, and started soaring high amidst the stars! They must have been quite high, indeed. The band slowly transitioned from hazy '60s psychedelia to slick '70s AOR, and eventually to coldly-calculated '80s power ballads.

In 1978, during a live recording of the Star Wars Rosh Hashanah Special, a drunken Grace Slick fell over and accidentally tore off Kantner's human disguise, revealing himself as a hideous alien and shocking viewers worldwide. As a result, she was ejected from the Jefferson Starship fleet. During her time away from the Starship, she developed a hairspray addiction (see right). Less noticeable, however, was her awful drug and alcohol addiction. Real bad stuff right there...

In 1984, Grace decided to return to the Jefferson Starship and take control of it for herself. Onboard the Starship, those working under Paul Kantner were getting fed up with him trying to push the band in an "intelligent" direction, since everyone else just wanted to write sappy AOR. Overnight, Grace and the crew broke into Kantner's sleeping quarters, blinded him with his own reflection, and ejected him into space, where he floated for years, never to be seen again. 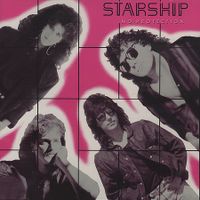 After the coup against Paul, Jefferson Starship shortened their name to just Starship. Grace and Mickey Thomas were elected as their leaders, known for their voices that were high-but-charming in their own weird way. With two great vocalists in charge of Kantner's old crew, they had gained control of what would become the most powerful and most feared cult of the '80s. The band came up with the plan that they would control space by filling the airwaves with pop songs that promoted their message of total domination, the plea for legalized baby killing, and peace through giant hair.

Starship's first #1 hit was "We Built This City", a celebration of an imaginary city built on rolling rocks, so it could be transported easily. The follow-up, "Nothing's Gonna Stop Us Now", was a warning to all those who tried to stand in the band's way. It immediately became a hit, though no one picked up on the subliminal messages. Starship's final warning to the people was "Sara", a song that explicitly states the band's intentions to bring "Sara" (an obvious euphanism for world domination) together with them. The lyrics plainly say that there is no turning back, and that this domination would happen no matter what.

Unfortunately, in 1989, Grace Slick departed the Starship to pursue a career in music, going back down to Earth to join the Jefferson Airplane (one of many bands named after Thomas Jefferson's scandalous transportation devices) in 1989. Without Slick, the Starship soon faltered, crumbling and plummeting to Earth in flaming metal chunks. Thus ends the story of Starship, one of the '80s most beloved-yet-unthinkably-cheesy pop bands. 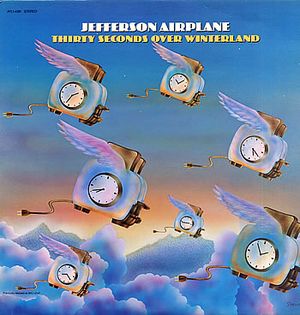 Jefferson Airplane Starship allegedly went through quite a few members. It was started by some guy, there were some singers, guitarists, drummers, even got one of the ladies to play an organ for awhile. More guitars, drums, vocals...ooh, percussion. Whatever that is.