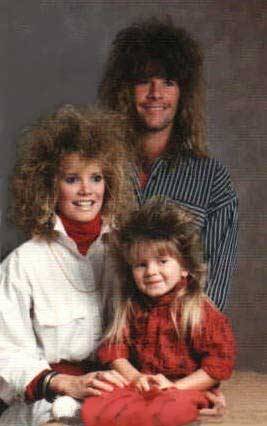 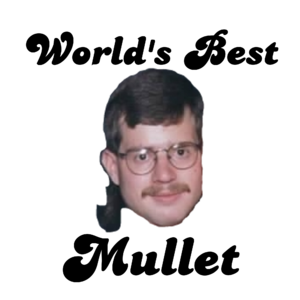 Some say Lled Nhoj has the World's Best Mullet
Whoops! Maybe you were looking for The South?
“Don't cut my hair; My Achy-Breaky Hair;”

“Give me the usual”

“I donate all proceeds from the Box Factory to my Children Without Mullets organization.”

~ Box John Dell on State of the Mullet Address

“When i first saw my daddy he seemed cool, then he turned around.”

~ Miley Cyrus on Her dad

“I approve this page.”

~ Pat Sharp on This page

A Mullet is a very popular, indestructible, all powerful style of action hero hair, predominant across North America, but also found in Europe, Australia and South America. Shamus Walsh has often disgraced himself by sporting this style of hair along with a rather lengthy hairline. It is characterized by the famous saying "Business in the front; party in the back!", although this has often mistakenly been thought to mean strip clubs instead. The mullet is equally popular with both sexes, as well as some apes, earning it the alternate name: "ape drape". It was invented by David Bowie.

The first misconception that most wannabe Mullet-heads have is that by simply cutting your hair the proper way, you will gain +10 Attack, +8 Defence, and the ability to Time Travel. This could not be further from the truth. The real secret of the mullet's awesomeness lies not in the wizardry of hair-cutting, but from within you. A mullet should be thought of as an attitude, not as a haircut. You must become the mullet. Then, you must move to the Southern United States.

“In Soviet Russia, haircut defines YOU!!!”

~ Russian Reversal on how the hair makes the man

Alternatively, some people just clip the front and sides short, and leave the back longer. What a bunch of losers.

In South Dunedin, New Zealand persons not having a mullet are executed on the spot for treason. Secondly all women over the age of 12 must be solo mothers also with stunning mullets that contain strange magical properties not allowing them to leave south "D". leaving them in a state of inbreeding and mullety glory for many generations.

Ancient History of the Mullet[edit]

The history of the mullet has eluded mankind for centuries; it always just seemed to be there. Scholars researched, barbers queried and governments investigated, but no definite sources could trace an origin to this awesome hairstyle. It was not until 1995 that renouned dermatologist and acclaimed Beastie Boy "Mike D" wrote in his article:

It was determined that since Mike D could not give the public any useful information, and he had used a lot of big words that nobody could understand, that the Mullet would reign as the symbol of supreme awesomeness, as it had before; even though Mike D himself did not have a mullet. Mike D's scientific explanation of the mullet's history has since been contested by some of the dermatological community, but generally it has been attributed to jealousy, that they didn't think of this first.

Presidential Mullet Day is a worldwide holiday held on June 19 where people from around the world celebrate Presidents with mullets; however celebrating this holiday is illegal in most countries. Observers of this sacred day generally celebrate in the privacy of their own Trans Am's.

Mullets? Popular Culture? Pull the other one!! Leg, not mullet, sorry.

Billy Ray Cyrus, left, with his younger brother Marky in the family pool

"Business in the front, party in the back!"