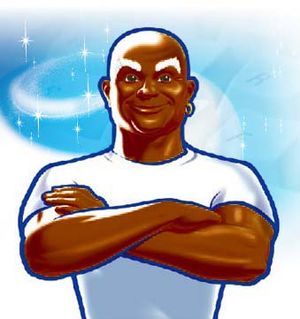 For those without comedic tastes, the self-proclaimed experts at Wikipedia have an article about Mr. Clean.
“Mr. Clean and Mr. Benn are living in my loft.”

Mr. Clean (born Louise Garnet Schitt; April 20th, 1889, in Branau am Inn, Austria) is a man with less than ten percent body fat who is deliberately bald, stronger than steel, faster than lightning, harder than Angola, wiser than Solomon, sweeter than saccharin, and does not put up with haters. He was a known transexual, and a mysophobic. Later in life, he became an advocate for bald rights and sponsored the Mr. Clean Beauty Pageant.

Louise before her surgery

Louise after the surgery. Note that she looks completely unchanged. Uncanny, that.

Louise Schitt was born into a devoutly Christian family of 19 children. Her mother, Paula, died when she was four of acute nudity. This left only her father, Abraham, to care for the mass of little Schitts. Abraham worked long and hard every day in the Austrian chocolate mines, which left him little time to look after the house or the children. The Schitt house soon became a squalid mess of filth and disease. Louise's youngest brother, Albert, a child of two, was eaten by a large rat in 1909. It took the family six days to notice that Albert was dead, as his tiny corpse was buried under a pile of garbage. This incident, coupled with her father's death from scabies in 1912, instilled in Louise a powerful fear of dirt and germs.

After her father's death, thirteen year old Louise, as the eldest Schitt, took it upon herself to care for her brothers and sisters. She cleaned the house fanatically from morning until night and would go into conniptions if she thought something might be a breeding place for germs. At fourteen, she scoured all the fur off the family cat for fear the animal might have fleas. Around this time, her hair began falling out from stress. Rather than object to this, Louise encouraged it by pulling out fistfuls of her own hair, believing hair to be a hotbed of mites, dust, and dead skin cells. By the time she was sixteen, she was totally bald.

One evening in 1928, Louise Schitt's cousin went bungie jumping outside his trailer and broke several bones in his body. The doctors believed they could rebuild him, smarter, faster, and truly bionic. A hundred million dollars later, on a stretcher in your mama's basement, he was reborn. They called him "project clean" or "Miss's Clean" for short.

Louise's psychologist suggested that she spend some time away from her home and family, so at 17 she left them all behind and departed for Tibet. In Tibet, she lived amongst the peaceful monks of the Really Quite Immaculate Order. These monks taught her the formula for the ultimate cleaning solution, which had 168 different cleaning agents. To this day, the entire formula remains a secret, although some have been able to piece together bits of it. Fermi deduced that the formula contained yak spittle and lingonberries, while Albert Einstein detected trace amounts of human blood, as well as that of the Gladiator, Saracen.

Whatever the contents of the formula, Louise took it with her when she emigrated to New York in 1920. She soon managed to market it to an evil, nameless corporation. It seemed all was going well for Louise, but the corporate executives objected strongly to her idea of putting her own picture on the bottle, saying that no one would buy cleaning products from a woman. Especially a bald one.

Undaunted, Louise approached sex change surgeon Dr. Fu Manchu and asked to be transformed into a man. Equally undaunted, the good doctor performed the surgery, and a new entity, Mr. Clean, was born.

Following the success of his wide array of cleaning products, Mr. Clean attempted to break into acting at the prompting of his lover, Earl. He played "Bald Guy #1" in a Broadway production of Hamlet, and "Bald Guy #4" in a Broadway production of Ibsen's The Doll House. Mr. Clean was reportedly very disappointed in his casting in The Doll House, having originally been up for the role of Nora. The play's director and producer dismissed him early on for this part, however, describing him candidly as "too bald".

Mr. Clean quickly abandoned the acting profession, trying out for only one more part in his entire lifetime. This was the role of Jean Luc Picard on television's Star Trek, for which he competed bitterly with Patrick Stewart. After losing the part to Stewart, Mr. Clean had this to say: "Patrick Stewart, eh? What a wanker."

For years, Mr. Clean felt lost. His acting career was over before it had even begun, and he craved another creative outlet. During the 1960s, he began abusing inhalants, ironically using many products from his own line of cleaning supplies. In disgust, Earl left him. The loss of Earl shocked Mr. Clean into sobriety, although throughout his life he would return to huffing when he felt particularly depressed. 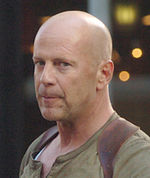 In the 1980s, Mr. Clean came out of the closet to the public, receiving a mix of ridicule and applause. Liza Minelli encouraged him to begin campaigning for gay rights, but he ignored her suggestion, because he hated her. Instead, he began a campaign for the rights of bald men, committed to dissolving the public image of the bald as ugly, freakish, and above all, sexually inadequate. He began his nationally renowned "Bald is Beautiful" campaign in 1987. The campaign consisted of brief public service commercials featuring Mr. Clean having rough sex with other bald men.

In 1990, he founded the Mr. Clean Beauty Pageant, at which contestants were awarded prizes depending on how much they looked like Mr. Clean. During the talent competition in 1995, a group of dirty terrorist hippies broke into the Holiday Inn convention hall where the contest was being held. They rushed the stage and began flaunting their long, tangled locks to the audience and contestants alike. The hippies shouted anti-bald slurs and blatantly shaved themselves, leaving little piles of hair all over the stage. In response, Mr. Clean dropped napalm on all of them, which not only removed all their hair, but also killed them where they stood. Mr. Clean escaped prosecution because no one really likes hippies, least of all the legal system.

In 2004, his acting career skyrocketed when he got the part of John Locke in Lost.

As of 2005, Mr. Clean resides in Los Angeles with a cabal of prepubescent boys, to whom he is purportedly teaching the secrets of his cleaning formula. Accusations of pedophilia and child pornography have so far proved fruitless.

Miss's Clean keeps at a distance plotting for her revenge.