From Uncyclopedia, the content-free encyclopedia
Jump to navigation Jump to search
“I'm Scruffy. I'm the janitor. Scruffy knows who killed Nicole Brown Simpson and Ron Goldman. In Scruffy's o-pin-ion, it were...”

~ That janitor from Futurama on his last words 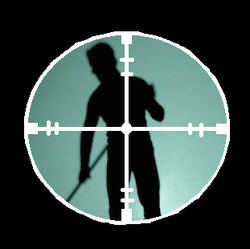 A criminals' perspective of Janitor Man.

Janitor Man is a superpowered cleaner, best known for his ability to clean the cities of crime. By day, he goes about his normal duties of cleaning schools for very low pay. But by night, he swoops into the nearest utility closet, and with a superpowered spin, he becomes... JANITOR MAN!!!

The Origin of Janitor Man[edit] 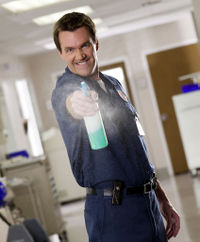 It all started on a regular day at the school. Mild-mannered Billy Bob was cleaning the hallways, when he suddenly noticed an unusual glow coming from within the girl's bathroom. Curious, he entered the lavatory, and he saw a naked girl laying on the floor in a suggestive pose. Furious at his disturbance, she shot Billy Bob with her radioactive laser beam eyes, and then she jumped out the window.

Later that night, Billy Bob began to feel strange. His janitor's cap wouldn't come off his head, nor would his janitor uniform leave his body. The next day, he went to get his mop out of the utility closet, when he found that just by thinking about the mop, he could make it fly through the air and into his hand (however, the first time he tried it, it flew through the air and whacked him in the head). He also found that his mop felt strangely different, and that it could now clean messes and spills with the greatest of ease.

That night, Billy Bob was watching the news. The current headline was that some guy had shot a man downtown. The victim looked strangely familiar to Billy Bob. Then, with a wave of shock and horror (and sexual arousement, for some reason), he realized that the victim was his own father. He raced downtown in his car and accidentally ran over his dying father. Furious, he drove back home and slit his wrists. From that moment on, Billy Bob dedicated his life to fighting crime as...

As the days went on, Janitor Man realised he had developed more powers than telekinetic control of cleaning supplies. He developed super clean vision which allows him to blast random children in the face with bleach when they urinate around the toilet rather than in it. His suit slowly developed abilities of it's own such as becoming bulletproof and able to carry whatever inexplicable item he may ever need.

With his vast array of tools, he fights any and all dirty people, mainly dirty girls. At his disposal are the mighty Knife-Wrench, a master key to any door in the universe, spray bottles of ammonia, and the Drill-Fork, which can drill and fork, mostly fork. He also has a gathering minions who duct tape J.D. to the roof.

He hobbies include taxidermy and dressing as a ghost to scare little children.