~ Oscar Wilde on The Assquatch

An Assquatch is a being, easiest defined as a man-beast, most commonly associated with the North American continent and the French Riviera geographic regions of the world. As legend, Assquatch is closely related to the legend of the Sashquash (beast-man) of the American Northwest.

However unlike the mythical “Bigfoot” - whose only confirmed public appearance was as a guest star of the Six Million Dollar Man in 1975 – multiple sightings of multiple Assquatch descendents is a daily event in places like Italy, Saint Tropez, Nice, Palm Springs, Fire Island and Key West where the Assquatch roam freely with humans, unencumbered by clothes worn to mask their true beings.

Origins of the Assquatch[edit | edit source] 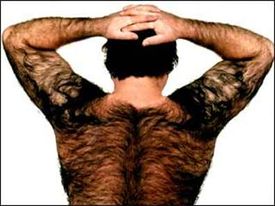 Put your hands on your head Assquatch, and no one gets hurt...

Very closely related to humans, it is believed that at the time that modern man (Homo Erectus) developed from its earlier brethren, that a small recessive genetic “whoopsee” occurred which produced a human, that failed to shed it covering of its course, wiry body hair. While suitable for cold climates, such a thick coating of hair, especially on the back and shoulders so came to be regarded as a sign of brutishness and just plain ickiness.

So in an attempt to blend in with their more fashionable, minimal body hair covered kin, the Assquatch took to acting brutishly, and more importantly, overtly defensive about their appearances. To relieve the stress of rooted in their castigation by society, they took to hammering iron, growing full beards and wearing a cloth shirt which was named the “wife beater” in an attempt to poke fun at themselves.

As select breeding took place, the Assquatch people diminished in their numbers as good looking women ran from the “man-beasts” into the arms of the more attractive modern men whose bodies were covered in less hair, and selectively placed hair at that. Strangley, the very nature of being Hirsute acted like an aphrodisiac in attracting men together who found that their overt bearishness was a big turn on for each other. Thus, there was a huge number of “daddy and boy” couples roaming about which put a damper on the procreation aspect of sex, and thus fewer Assquatch.

Jeremy defies the stereotype of an Assquatch; he is widely considered to be gross and disgusting, yet he gets more tail than most non-Assquatch males could imagine because women, for some unexplainable reason find him gross, but in a "hot" way. Furthermore, Jeremy’s exploits are attractive to men, who buy millions of his filmed performances every year.

How popular is Jeremy?

To date, the Assquatch Jeremy has sold more box office (gross – no we mean this is really gross) than Sir Laurence Olivier, Cary Grant and Steven Seagal put together.

While it is unusual an XX chromosome pairing to produce a female who is an Assquatch, it can happen. One such being was Mexican Painter Frida Kahlo, an Assquatch of monumental proportion.

While documentation of Kahlo’s assquatchiness is limited to her eyebrows and her thick mustache. According to her husband, Diego Rivera, the hair on the lower portion of Kahlo’s body was primarily located on her posterior, and a bush above her penis; the growth of hair between her breasts was attributed to a large dark mole, and not genetics.

For those who prefer a live experience of Assquatch watching in their native environment find themselves in traveling to many exotic places around the world:

Hip brothers on the street, who know the low down and keep the skinny sweet have co=op't the white man word and owned it, after beating the bitch to mean a "hairy ass", as in "Yo, did you see that mother fucker in the locker room? He is sporting one mighty big Assquatch." This of course does away with the idea that an Assquatch would also have the back hair, but on the other side of the coin, how many black men have you seen with an Assquatch of their own?