The hero of time and popular 80s icon.

For those without comedic tastes, the so-called experts at Wikipedia have an article about Pac-Man.

Pac-Man is a popular '80s arcade game. It is a sort of Irvine Welsh-style urban nightmare in which a jaundiced figure scurries around frantically guzzling pills while pursued by spectres in a nightmarish urban maze from which there is no escape). These events have been lost from the pages of time.

The Big Bang was not created by God. It was, in fact, created when an '80s teen beat the high score on a Pac-Man and ripped the space-time continuum in a moment of excitement. Pac-Man was then worshipped as a God by the early civilizations, and generations of arcade nerds after.

The word "Pac-Man" alone stirs up deep emotion in the hearts of many Americans, perhaps deeper emotion than any other word. One can not simply read what "Pac-Man" means. One must 'feel' what Pac-Man means. 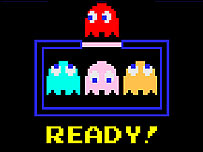 Pac-Man is set in ancient Egyptian times, where God creates a walking, talking sphere of cheese. God commands that the newly embodied "Pac-Man" devour all things pill-shaped on Earth, and thus his great hunger begins. Standing in his way are The Four Colourful Minions of Satan, better known as "ghosts". The player must make their way through all 255 Egyptian temples, swallowing pills and avoiding the ghosts along the way.

The player controls Pac-Man through the halls of an Egyptian maze, eating pills. When all pills are eaten, Pac-Man is taken to the next stage. Between some stages, one of three funny cartoons plays. Four ghosts (The Colorful Minions of Satan) roam the maze, trying to catch Pac-Man. If an enemy touches Pac-Man, a life is lost and Pac-Man withers and dies. When all lives have been lost, the fun is over. Pac-Man is awarded a single bonus life at 10,000 points by default.

Near the corners of the maze are four larger, flashing dots known as power pills that provide Pac-Man with the ability to hallucinate eat the ghosts. The ghosts turn deep blue, reverse direction and usually move more dopily. When a ghost is eaten, its eyes remain and return to the center box where it is regenerated in its normal color. Blue ghosts flash white to signal that they are about to become inedible again.

Yellow pills are not the only small tasty objects that Pac-Man is fond of. In fact, the player can also gobble helpings of white powder or fruit for bonus points.

Rumour has it that a 256th level exists, but this would have created a subspace schism since there are enough Hexadecimal numbers in the universe. This meant that all things ended when Pac-Man was full from eating.

In 1979, Namco employee Toru Iwatani came up with Pac-Man after cutting a slice of pizza. He wanted to make a video game based off this slice's adventures.

"Wakka Wakka Wakka", the sound that Pac-Man makes while eating, is a modern translation, derived from the Latin "Wagja," (pronounced Wa-ki-ah) meaning "OPAH!". The common term is used as a form of intimidation, mainly against ghosts and tramps. When the dreaded words "Wakka Wakka Wakka" are spoken, entire worlds crumble under the power of Pac-Man.

Pac-Man the arcade game was a huge success and it damaged the minds of teenagers all across the United States. Currently, Pac-Man serves as U.S. Ambassador to the United Nations and is living comfortably with his wife Ms. Pac-Man. He also appears every no and then on TNA as part of Team Pacman with his partner Ronaldo "The Fact" Killingsvanillderburg.

Several weeks ago Pac-Man sold the rights to his story to the Weinstein brothers so that his life could be reenacted as a movie. Fans are already speculating how it will play out. Only one picture has been released and it circled the globe like a wildfire or flash flood.

According to a July 2009 issue of Vanity Fair, Vin Diesel has expressed interest in portraying the titular Pac-Man on screen citing "What can I say? I got the munchies."

A script is currently in development by the Weinstein brothers. They state that perhaps their biggest task in faithfully representing the hit 1980 classic Pac-Man on the big screen is developing a plot that can serve the film more than a runtime of 2 minutes with nothing but maze-like pellet eating. Longtime musician and film composer Danny Elfman is currently attached to the project as well and is confident he can mold the ever so popular "waka waka" sound effects from the video game into a full fledged musical composition.