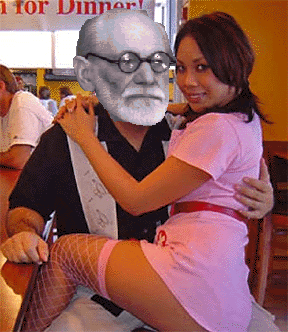 Good old Sigmund thoroughly enjoyed the rigorous testing that he put his female patients through, and so did they (sometimes).
“Wow, that’s a big wanger, I wasn’t expecting that”

“I don't know what all the therapy is for. I love the cock”

“It's not so much shock as disappointment. I never get enough of it”

“I mean, like, cocksShock is brutal. I had a bout of it last week, when I had three in all my holes. It like came as a real surprise.”

~ Paris Hilton on her extreme case of cock shock

Cock shock as a term was first introduced by the psychologist Sigmund Fraud in 1905. After years of critical analysis of the female subject (including the usual "testing"), he developed the theory that most, if not all, women at some point in their life suffer from this neurosis. "Cock shock" occurs when a woman feels overwhelmed by the length and girth that is placed in front of her. It can also occur when a woman is not expecting to see a penis (see Fraud’s notes on “spam-rod surprise”). In this instance, the feeling of surprise becomes linked with a feeling of being overwhelmed by what she sees, the result being that the subject blanks out all memories of the experience. Virginia Woolf described her own experience of "cock shock": “It was as though I had shell shock. I just blanked out the memory afterwards. It was just too much!”

Fraud claimed that after the female specimen experienced cock shock, several symptoms began to happen. For instance, the woman becomes unconsciously frightened of the large specimen and instead imagines it to be a cute furry animal, often a kitten. She stabilises her delusion by giving the "kitten" a name, for example, "fluffikins", "tiddles", and "man-meat truncheon". Women known to have adopted this defence mechanism often take the next (some may say natural) step, and begin to huff these "kittens". Examples of such behaviour can be seen displayed by prominent public figures such as Briana Banks, Chasey Lain, and Cherie Blair. 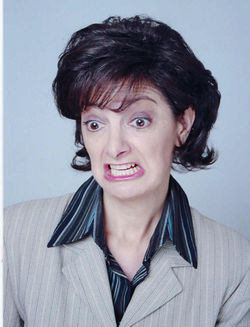 Cherie's response on reaching the final phase of her cock shock therapy sessions. We don't think she was quite ready.

Today’s treatment for cock shock is based on Fraud’s own original treatment, which involves the patient being faced with her fear, in a hierarchical order of intensity. For instance, the patient would be shown minuscule phallic specimens from the likes of such pathetic males as Gordon Brown, George W. Bush, Marilyn Manson and you. In the second session, a mixture of specimens would be shown and then the patient would be confronted with the big whoppers, from the likes of John Holmes, Ron Jeremy, The Green Giant, The Incredible Hulk, and Kermit the Frog. This treatment has proven to be very effective, as now only 1% of women live with cock shock in the United Kingdom.

Fraud’s original treatment for cock shock was more extreme than today’s. He decided that the only way he could help these women was to provide the maximum amount of cock shock possible, so that any cock shock thereafter would appear as minuscule in comparison. In 1906, Sigmund Fraud put on his brown raincoat (now known as a flashers’ mac) and bared all to the women of Wankendorf (a place known for high levels of Cock shock). In his essay On Sexy Time and Cock Shock, he comments upon what happened that day: "a mixture of reactions occurred, many of the women fell about laughing shouting about “tiny one” (I need not mention the fact that these women had recovered from their bout of cock shock, due to my treatment), whilst others screamed hysterically. I believe those women who screamed hysterically had simply suffered from Cock Shock for so long they were not able to recover from it."