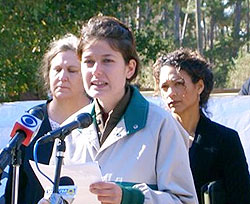 Rebecca Johnson on Wednesday. "You'd make a great boyfriend," Johnson said, "but not for me."

SAN FRANCISCO, California -- At a press conference on Wednesday following your failed request for a dinner-and-movie companion, Rebecca Johnson urged you not to be concerned that you haven't met that "special someone" yet. Johnson, along with a panel of other women, also assured you that "there are still plenty of single women around." Johnson added, "even for someone your age." When asked to elaborate, Johnson explained that given the nation's high rate of divorce, the dating pool for older males was actually quite large.

Since the last remark drew muffled criticism from onlookers, Johnson hastily added her opinion many women initially married for appearance, athleticism and financial-status and "might decide to date someone exactly the opposite" following a possible divorce. Immediately discovering the mistake in her rhetoric, Johnson left the stage awkwardly and was driven from the premises in the passenger seat of her boyfriend Dirk's BMW-convertible.

Other girls on the panel quickly sought to soften the blow of Johnson's remarks, stating that you are a "special type of guy" who needs to reach out to find your soul-mate. "Maybe you should make a page on MySpace or something," the women said. 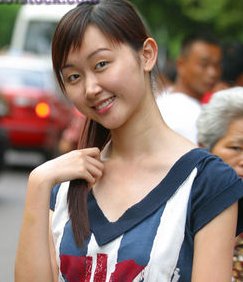 Katie McGalligher, following the press conference. "I hear there's lots of single girls in Russia," she said. "Fuck you," you thought to yourself.

Katie McGalligher, 24, of Dallas, Texas, said that she "thinks of you more as a little brother," while brandishing what witnesses described as a "sincerely sympathetic smile." McGalligher went on to describe a three month period in 2002 when she'd been single and, though she believed she'd be single the rest of her life, she met someone at the 9-Eleven the next day.

Other women in the panel left the conference quickly, mumbling something inaudible as they turned away from you.