Ah virtual reality, what a pleasure it is. We can see everything in 3D around us, every polygon feels real and my head hurts. Is that real too?

The Virtual Boy was released in 1994 after much speculation from Nintendo's internal design team. Would this be the console of the decade? Should they hold it back another year and use no graphics instead? Will ten games be enough, or is one hundred better? Is it such a good device that it ought to be cancelled for 20 years? Gunpei Egg Yoke, the engineer behind the innovative device, knew just what to say and when to say it, but this time Nintendo thought they were really on to something- something big, hence why they would willy nilly assure eachother that features could be removed and that a lack of games could be prevalent - the system is that good! 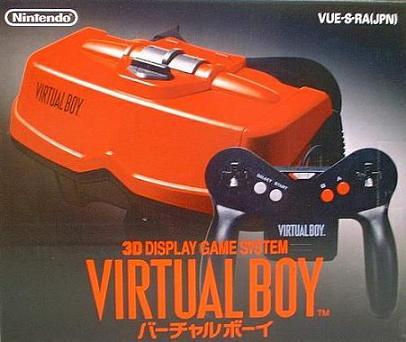 Looks innocent, oh on its little legs, doth it not? I love red too, don't you?

Who needs fancy graphics or stacks of games? Egg Yoke insisted that it's no good to spend time idle and that surely the Nintendo genius heads would be able to create a great successor to the console in another six years when the next console generation comes? Nintendo execs agreed that's "it's foolish to believe that something can simply be the best with no room for improvement", and discarded all of their market saturation contingency plans. Virtual boy go! To the rescue! This system would surely have games to beat other games such as: "Simon says" and "Say gay!" Yes - this would be it!

Upon release, Egg Yoke created a marketing Campaign Leaflet all about the engineering excellence that went into the design, with catchy slogans such as: "Razor sharp sight for razor sharp minds" and "Nimble tabletop red head." A more patriotic slogan was: "See a red spot? That's Japanese made!" The philosophy was that minorities such as intellectuals, Japanese people, and red heads, would be accounted for with the console's release. 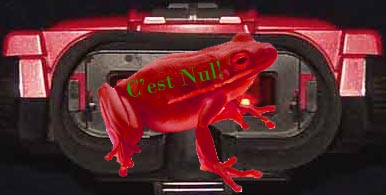 Pour quoi? Why!? No frogger for French fanatics. Oh how Virtual Boy failed in France!

The Virtual Boy is a step forward in anti-social gaming, and it makes kids look like little scientists. Oh he's growing up isn't he, acting like he's looking through into another world through some scientific little toy, like a periscope! Soon he will see the world with the eyes of a scientist. ~ A positive market impact.

Egg Yoke was a clever man, he wanted to stimulate people's minds, but he also wanted to make kids look nerdy and wear glasses too. It was his hidden agenda. The original gameboy just didn't do this properly.

Another device used to brainwash in the games, is the "seeing red" technology. It's simple, whenever your kid sees red, he knows to shoot.

Nintendo pulled the system out of the market prematurely because the French developers could not include green frogs in their game, and as frogs are a major part of their culture, it is out of the question. No frogger for the Virtual Boy then.

England would be a bad market too, because most people in England are upper class posh boys who already wear glasses. "If we are to release it in England then we need a prehipheral that transfers the game to a person's glasses. This is going to take time", says Yoko. This eventually materialized in the dying days of the console.

Germany would have problems with the Virtual Boy because it is too delicate, and enthusiastic gamers are likely to use it for bondage. It is sure to break, and the big german hands of Gunther and Farter will smash it to pieces. Even the Chancellor isn't likely to stop eating his frankfurter for this tiny piece of garbage.

The following dispute shows that even Mario was not keen on the idea of red graphics:

Mario: "It's a me! I'm a not a science experimenta"

"Bowser: Why the frick am I the same colour as Mario?!"

"I want a you to a discontinuea dis consola."

Mario: "It a hurts a.. all dis red a hurts a me and I am a not a used to a going through a three dimensions a."

But it's not real 3 dimensions! Hey this is gonna be a real hard Mario game. Bowsers gonna be pissed and more firey this time round. Mario you gotta save the world.

''It's alright, once this is over we'll make you properly 3D and you'll feel king of the world.''

''Besides, mushrooms make your life colourful!''

''What? Oh just shove him in the Fucking crap game already.''

A typical Virtual Boy game: Red was a very appropriate colour for many games such as this! Bull Fighting Boy, Gooo!

Who needs monochrome when you can just take tablets? That's what Nintendo does! Or if you're Mario, you can take a Magic Mushroom - add colour to your life-ah!

Egg Yoke: "We really need a Geordi La Forge game! Think about it, we can just pretend he sees everything in red! Yeah great idea, and if the player goes blind ... just say his visor has been stolen and it's a real simulated experience, so real you'll think you've actually gone blind... FOREVER!" (The visor was a cancelled project) 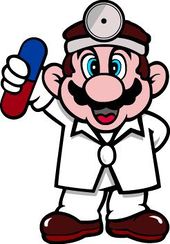 Originally designed to prevent piracy (due to lack of compatibility with coloured games), Nintendo thought they were safe from video game piracy. As usual though, the intense rivalry from Sonic and Mario would inevitably give rise to a new era of Red Sonic.

Sonic sez: Hey man, this lack of blue is way uncool, learn about colours nintendo, go back to school!

Mario: "Hey a sonica you a blue retard ah, you cant ah come to a my games ah now. "

Sonic sez: I'd hope so, but ya know, sometimes some nasty pirate is gonna slap you in a world you don't wanna be in, so I'll have to stop those badniks from shoving me in red world and changing my cool colours. Imagine if I was made red too! That would be way uncool!

Mario could not stand being in this game any longer. He could not be seen like this. Every movement is slow, everything laborious. Just listen to him pushing his way down the pipe. What a blockage indeed. Never before has Mario been so sluggish. It's a grim world, slow, daunting. Mario does not even smile or show a peace sign with his fingers when the one and only level in the game in complete. What a relief that was over. Now those horrible players in the background just need to wake up! Why are they impressed by this shit!?