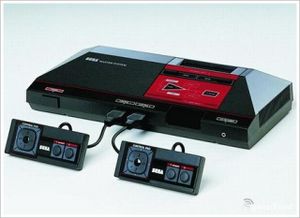 The Sega Master System was an 8-bit video game platform produced by Sega in the mid-to-late 1980's. Despite its name, there was nothing masterful about it. In fact, it came in a gross second to the contemporary Nintendo Entertainment System, or NES. I grew up in the 1980's and had like 50 friends who owned an NES, and one friend who had a Sega Master System. He never had anybody to trade games with.

I think there was some red somewhere on the Sega Master System or its controllers, but I'm not sure.

Name one title that was really popular on the Sega Master System. C'mon, I dare you. Can't do it, can you? That's because there weren't any. NES had Super Mario Bros. and The Legend of Zelda, not to mention Metroid, Castlevannia, and a host of other cool titles. There was nothing memorable about the Sega Master System. I heard a rumor once in the 1980's that the Sega Master System had better graphics, but when I saw the thing, I couldn't tell the difference between it and NES as far as picture or sound quality. And let's remember the lesson of Betamax: superior technology does not always a superior product make.

There must have been games for the system, because I remember playing them at a friend's house when I was a kid. But I can't for the life of me remember what they were was called. It might have been a spaceship game called Zaxxon, but then again, I think I played that on the 8-bit system, Colecovision. So I'm not really sure. Someone, be a good neighbor and lend me some sugar here. 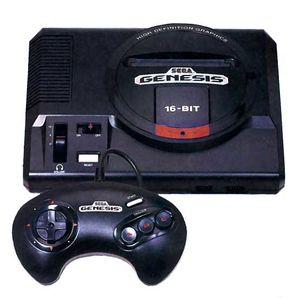 Genesis was always the master, never the teacher.

Everything changed for Sega in 1989 with the advent of its Genesis system, the first major 16-bit video game console. By that time, it had been five years since the 8-bit systems had dominated the market, and people were ready to upgrade. For some reason, Nintendo dropped the ball big time and didn't have a competitor console ready until, like a year later or something. And then, the marketing for the Nintendo system really sucked (c'mon guys, Super NES? That was the best you could do?) So Sega truly had its rebirth with the Genesis system, but that's actually a separate article.