“We didn't need crap like video game systems, we had kittens to huff.”

“Oh, Papa Smurf...the sound on this system bleeds my ears!”

“I wonder what the AVGN thinks about this console....he should review this shit load of fuck.”

The Atari 1300 was a very early gaming system created by Atari officially launched to great initial malaise in 1969 (this btw is the only thing in '69 that wasn't loved). It was apparently derived from the top secret, but assumed to be more primitive, Atari 650 project codenamed: Capricorn. Early development began in 1968 when Nolan Bushnell, hopeless Space War addict that he was, wanted to translate that game's time sink properties to a home version that did not require a million dollars worth of equipment to use. The "1300" designation indicates the number of dollars spent developing the prototype. To indicate a progression in technological sophistication, future Atari consoles would be multiples of this amount (see Atari 2600). The system discontinued in 1977. 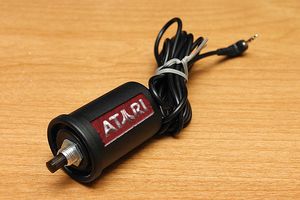 The simple, elegant Atari 1300 controller. The Wii controller design is a clear ripoff.

A rare glimpse of asteroids beta, developed on the atari 1300.

Bushnell wanted the 1300 to be elegant, yet simple, so as not to dissuade the hippie counterculture by creating something more complicated than lighting a spliff or watching a lava lamp to operate. The single-button Atari 1300 controller is still a model user interface device. Today's Wii remote thumbstick is such a design ripoff that Bushnell is considering mortgaging his Chuck E. Cheese franchise rights to pay for the legal action against Nintendo. The console feeds paper tape from a paper tape game reel punched with 50 copies of the software. The feeder device was typically a sedentary child holding the reel on a pencil. An optional paper tape feeder device was proposed, but the additional cost was not deemed marketable. Reading data at a then-remarkable-for-a-home-device six seconds per byte, the typical game tape loaded in around an hour, by which time the child had either become bored and gone off to play something else or passed out from sheer crippling exhaustion from holding the unwieldy reel steady.

Because the tape reader was made from recycled scrap taken from IBM's dumpsters, the paper tape was typically mangled to unusability after one reading, hence the 50 copies per reel standard Bushnell recommended. As one copy was mangled, it was torn off and the next used like toilet paper. After 50 uses, the software needed to be repurchased at retail, or at a prorated discount if the consumer sent the torn scraps back to Atari for recycling.

The Atari 1300 controller operated on the principle of "if you're too fucking stupid to figure out one button, you shouldn't be playing video games", a design philosophy continued today by creators of Deer Hunting and Solitaire computer games. The player's on-screen character was moved by various button presses. There were no forced conventions, but one press was usually "up", two quick presses for "down", two slower presses for "left", and three rapid presses for "right". Firing a weapon required four presses in under one second. It is a fact that epileptics and amphetamine abusers often scored highest in titles like "Shoot" and "Zig-Zag".

The console produced images in monochrome at 100x60 resolution and maintained five frames per second except when two moving sprites were on screen at once. Framerates then would drop to one or two per second. The machine had no internal sound chip but various hums and blips could be created by most televisions as interference noise depending on the proximity of the machine and its orientation to the set. At least one person demonstrated the ability of the machine to reproduce complex Beethoven symphonies if it was waved around the TV in a certain pattern by a strong enough person. 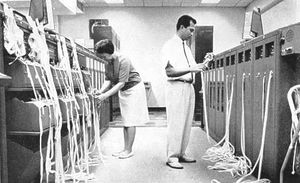 It is generally acknowledged that Atari 1300 game titles were the first ever to be subject to widespread piracy and illegal duplication. The lack of available copy protection techniques in the 1960's meant that it was pretty much the happy time for the fledgling computer cracker and warez scene. The first known cracked copy of Dot was released by Melvin Smerlish, who copied the code by pushing an icepick through the original tape holes onto blank tape, a.k.a. cash register paper. Before long Soviet KGB agents got hold of Atari tape and by late 1969 was taking out its frustrations at having lost the space race by replacing the 1970 Times Square New Years Day ticker tape confetti with actual Atari punched tape code. This little known incident remains little known and actual pieces of KGB confetti code sell for tens of thousands of dollars on sites like Ebay to morons worldwide.

Bushnell repeatedly attempted to prosecute pirates, but since even a dull pencil pushed through notebook paper could make a readable copy of game code, it was ruled to be too much of a legal burden on the end consumers to require that no pointed objects at all be in their homes.

The Atari 1300 was instrumental in another way to the hacking/cracking movement. The confused lettering used in hacker jargon, like "l33t" clearly traces back to erroneous hole punching during the illegal duplication process, resulting in unwanted characters being substituted in place of expected ones. Also, the first known use of Counterstrike n00blish dates to March 1971 when someone was overheard yelling "OMFGWTFBBQ" after playing Zig-Zag for 16 minutes without a crash. 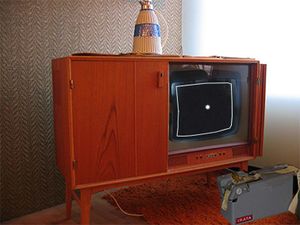 Sales of Atari 1300 consoles were allegedly brisk in 1969 but since so many people back then were drugged out of their minds most of the time, almost no one actually remembers owning or playing one. An Atari 1300 with serial number 46,803,424 is in the possession of the author of this article. Assuming that Atari didn't simply start serial numbers in the tens of millions, this would mean Nolan Bushnell should be the richest man on earth. But since he isn't, Atari 1300 sales are today postulated to be in the low dozens, if not fewer. 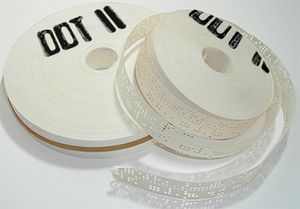 A new copy of Dot II and a partially used reel.

Dot - The only title included with the console, players control an initially slow moving dot in a square field whose speed gradually increases. Touching the field edge ends the game, and typically crashes the machine, requiring a paper tape reload. A stopwatch is recommended for recording scores.

Dot II - This 1970 release plays similar to Dot, only there are internal obstacles to avoid also.

Shoot - Basically Dot II with an option to "shoot" a smaller projectile at an obstacle to temporarily remove it. Actually firing at the obstacle required the console to perform collision detection calculations, slowing frame rates to one per 15 seconds and often crashing the machine.

Test Pattern 1300 - (1973) The TV station test pattern simulator. Never very popular, the original version simulated only bars. Test Pattern II added a 1000-Hz simulated tone created by bringing a magnet near the television while the test pattern was on screen. Parents hated this one.

Zapper - (1969) Another title that called on the machine to calculate collisions, Zapper was more successful as the player's "base" was stationary. Only the projectile moved. Followed in 1971 by Zapper II with the ability to shoot up to three projectiles as long as the player didn't mind waiting 2-3 minutes per frame update.

Zig-Zag II - (1975) Original Zig-Zag, with an added option to invert the colors.

In 1971, Atari created the Slim version. This model actually had a functional tape drive that did not mangle the tape, so the "50 copies per reel" design was obsolete. As a consequence, the Slim read the entire tape and future prints of games had a sticker on the box saying "ONLY FOR USE WITH ATARI 1300 SLIM". Also, calculations were much quicker only taking up 0.1 seconds of time.

When Atari was making the Slim model, they figured out by making it read the entire tape, they could stop pirated copies of games because they still had 50 copies on them. The way this worked is that there was dedicated START and END markers on the tape. If the Slim saw multiple Start markers, it would reverse the tape mechanism and display a scrolling message that said "THIS IS NOT AN OFFICIAL ATARI TAPE! PLEASE USE AN OFFICIAL TAPE!" Sadly, older games failed to function on the Slim due to the anti-piracy mechanism.

The controller was changed so the button was replaced with a trigger on the back, and a circular D-Pad on top. This made it easier for people in the early 70s to play Atari 1300 games.