From Uncyclopedia, the content-free encyclopedia
(Redirected from PlayStation 2)
Jump to navigation Jump to search 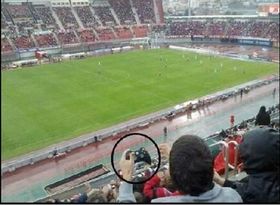 Playstation 2 (Japanese: ゲイステーション2 English: The Devil) represents the first stage of the fallof a total overcooked hotdog to the forefront of the gaming console industry. It has reappeared a few years ago in its slimmer form, most likely because it went on a diet.

The Birth of the PS2[edit]

The first Playstation 2 was hatched from an egg conceived by Mecha Playzilla (following its rape of a DVD-player production line), and was raised in the ways of evil and brain-consumption by Ken Kutaragi. The result was that the Playstation 2 became a very resentful and malicious console, only barely pacified by allowing it to stand upright, rather than horizontal with things piled on top of it.

Records show that the North American release of the Playstation 2 was accompanied with 5,000 games that hit store shelves. (The Japanese release was almost double that with 9001). About 65% of these were Japanese RPG’s, 30% were Mecha games, while another 4% were platformers and survival horror games. The first model of the console was very husky; occasionally it would decide to eat the discs you put inside it and blink its LED light if it wanted more. With the birth came an infinite wave of brand new games that would last centuries.

The on button is probably the most complex feature in the PlayStation 2, best approached with a sharp knife, if at all.

It can do two things:

In order to turn the Playstation 2 On you must first flip the switch at the back of the console. The next step is to push a button on the front of the console. Warning! Do not be alarmed by the next step or else you might be facing death. A secret hatch on top of your console will slowly open revealing a keypad. If you follow the instructions that come with the console you very well know that you must type in 666 to activate the console. This will unleash some fairly demented demon like creatures obviously thought up by the Japanese. (Similar to that of the Silent Hill series)

If you make any sudden movements the demons will instantly devour you skin and leave you tormented until you’re close to death. As soon as you die they implant your corpse with eggs and your body is dragged inside of the Playstation 2. Most users leave their power button On but this is not recommended as this is what feeds demons their power. Eventually turning on the console will become second nature and you may very well wind up being friends with some of the demons. Bob is the friendliest one; he enjoys drinking tea and exercising but don’t get on his bad side.

Things a PS2 is good for[edit]

Playstation 2 consoles, according to media hype at time of launch:

How to start a game on the PS2[edit]

It is actually a common misconception that any game could be played on the Playstation 2. Originally the system was designed to obliterate any data that was Top Secret produced by the Military. Sony decided to change the technology to incorporate a reading lens, which can be manually adjusted to get as close as possible to the CD and cause minimum scratching if necessary. Most games will give you disc read errors so don’t even bother trying them out. It’s fun and simple to buy a video game and read the manual as well as look at the box art, but is not to be expected to be played. Sony had a few complaints sent about this issue so they decided to update their system while simultaneously putting it on a diet. Rumor has it the slimmer Playstation 2 can now better read discs but upon ejecting the disc, you will be covered in projectile vomit as the console needs to keep its figure.

With the arrival of Microsoft into the videogame industry after their ill-planned attempt to purchase Nintendo, a full-scale war began to develop between major developers.

The ensuing struggle sees the release of the masterpieces Halo and Halo 2, but also finalises the shift in the video-game triumvirate from Nintendo, Sega, and Sony, to Nintendo, Sony, and Microsoft. Sega are still crying about this, but they sacrificed themselves to stop the rampage of Mecha Playzilla, which is some consolation.

Ultimately, the conflict between these three gaming companies is really a metaphor for human existence. Director Ang Lee has said that he did not so much wish to make a video-game movie, but rather Sense and Sensibility that had video games in it. He probably failed in this regard, but the way that Sony copes with its struggles is an inspiration to all of us. And really, is not Nintendo the true hero (after Sega, who sacrificed themselves for our sins)? When giant multi-nationals attempt to push in on Nintendo's market, he fights back for the hearts and hive mind of a bunch of anti-social dorks that only kids from the nasty part of the inner city could really understand. But aren't we all really just a bunch of kids from the nasty part of the inner city?

If you reverse the first 2 letters of the words Sony Playstation you get Pony Slaystation. Obviously an evil ploy by the sony corporation to force us to slay ponies, possibly by utilising the enormity and immense weight of their new playstation 3 to crush the skulls of said ponies. Sources believe that the facination with the unruly slaughter of innocent creatures started with an owie in pre-school. People are urged not to buy the horrible slaying stations and for safe keeping the RSPCA has recalled hundreds of these devices for hundreds of tests, probably testing on Human Nature.

The Participation in the Next-Gen Console War[edit]

The PS2 has grown completely impatient seeing its brother, the Xbox 360 and Wii. It now takes drastic measures into participating the Next-Gen Console Wars. Proving to the Wii that the PS2 has truckloads of sales, the three seventh-gen consoles laughed at it because the PS2 was forbidden to participate in it. However, many fans proclaimed to let the PS2 be in it. Now, the PS2 is currently dead last, while its brother, PS3, gained a upper hand and jumped into first.

In order to compete with the market and increase sales Sony thought up of a great scheme. Noticing the graphics that the Wii has, resembling that of the olden days where Dreamcast and Nintendo 64 were gods, it was easy to convince companies who are stuck in the 90s to port the Wii games they released for the Playstation 2. Poor families continued to feed Sony the extra money they needed while having fun with the same games that they can’t afford from the Wii. This helped Sony further their diabolical plan as they started porting PSP games. The Playstation 2 on the other hand glistened with a hint of light and whispered “please just let me die!” Although the console is in a coma and on life support, the company refuses to pull the plug.